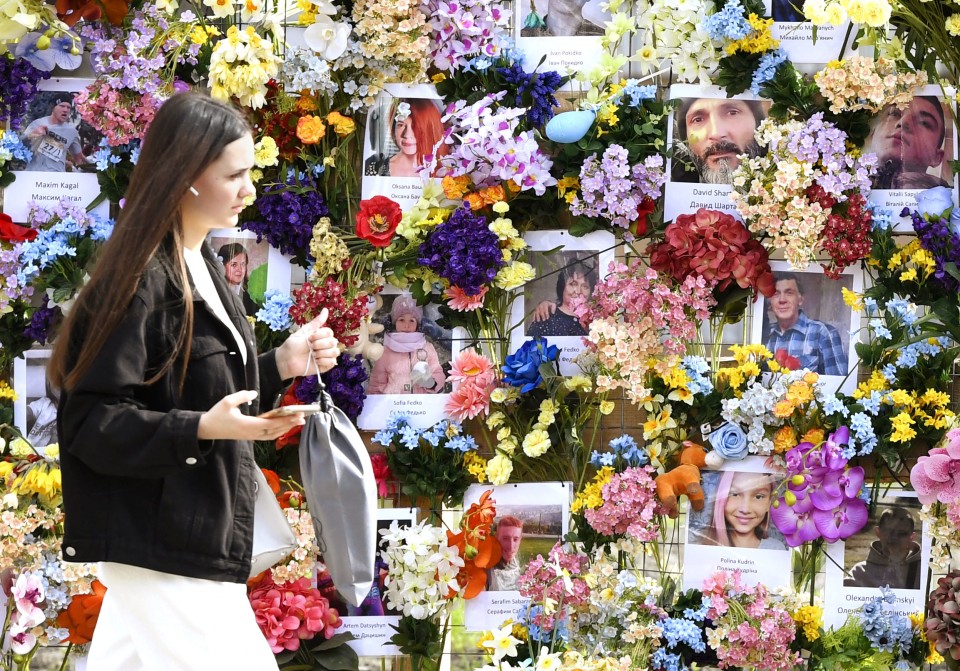 Flowers and photos of people who lost their lives amid Russia's invasion of Ukraine are seen in Lviv, western Ukraine, on May 4, 2022. (Kyodo) ==Kyodo

HIROSHIMA - European Council President Charles Michel condemned Russia on Friday for threatening to use nuclear weapons following its invasion of Ukraine, saying during his Hiroshima visit it is a "shameful and unacceptable" threat to global security.

In one of the two Japanese cities devastated by the 1945 U.S. atomic bombings at the end of World War II, Michel said he feels "seized by an intense determination" to eliminate nuclear weapons after visiting the Hiroshima Peace Memorial Museum.

SAPPORO - The body of a woman who may be one of the missing people from a tourist boat that sank off Hokkaido has been found washed ashore on Kunashiri Island, one of four Russia-controlled, Japan-claimed islands, the Japan Coast Guard said Friday.

The body was found May 6, according to the information provided Tuesday by Russian authorities, the coast guard said. Twelve passengers remain unaccounted for, with none found since April 28, five days after the boat went missing. Fourteen people have been confirmed dead.

Before conducting a nuclear test, Pyongyang may test-fire missiles, the official added.

TOKYO - Honda Motor Co. said Friday its net profit for the previous fiscal year rose 7.6 percent from a year earlier to 707.07 billion yen ($5.5 billion), helped by the depreciation of the yen against the U.S. dollar.

The Japanese automaker said it forecasts a 0.4 percent rise in net profit to 710 billion yen in the current business year through March 2023 amid uncertainty over the outlook for the global semiconductor shortage and the impact of coronavirus lockdowns in China.

BEIJING - At least one person, confirmed to have contracted the novel coronavirus, has died and around 187,800 people are being quarantined and treated after a fever "explosively spread" in North Korea, state-run media reported Friday.

Since late April, six people with symptoms of fever have died and one tested positive for the highly contagious Omicron BA.2 subvariant of the coronavirus, the official Korean Central News Agency said, adding that cases of a fever of unidentified origin have been reported nationwide.

The 10 companies have already submitted a confidentiality pledge to Toshiba to gain access to specific information about the company's finance and businesses, Toshiba said in a statement.

TOKYO - The Tokyo metropolitan government said Friday it has postponed "returning" a popular female offspring of a giant panda couple on loan from China for another six months until year-end due to transportation difficulties amid the coronavirus pandemic.

Xiang Xiang, born in June 2017 at the Ueno Zoological Gardens in the capital's Taito ward, was supposed to leave for China when she turned 2, but the loan was extended due to her popularity and later because of the pandemic. The new deadline is Dec. 31.