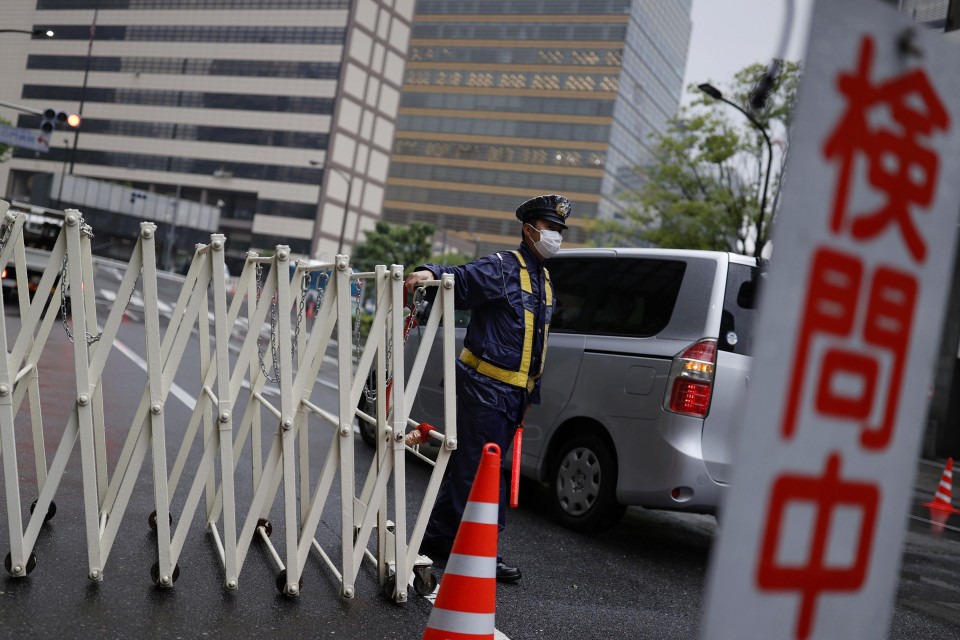 A police officer conducts vehicle checkouts near the U.S. Embassy in Tokyo on May 21, 2022, ahead of a summit in the Japanese capital on May 24 of the "Quad" group of Indo-Pacific democracies -- the United States, Japan, Australia and India. (Kyodo) ==Kyodo

TOKYO - U.S. President Joe Biden arrived in Japan Sunday, his first visit to the country since taking office, hoping to bolster the bilateral alliance amid China's assertiveness and reaffirm cooperation over Russia's war in Ukraine.

To step up U.S. economic engagement in the region, Biden will announce on Monday the launch of the Indo-Pacific economic framework, likely along with a list of participants, White House National Security Adviser Jake Sullivan said. However, he noted that Taiwan, a potential flashpoint between the United States and China, will not be a member at the initial launch.

In the two-day telephone survey from Saturday, the rating was up from 58.7 percent about a month ago. It found that 53.9 percent of respondents backed the government's recent decision to change its policy on masks, now saying that wearing them outdoors is not always necessary, provided people are not conversing.

BANGKOK - A meeting of trade ministers from the Asia-Pacific region ended Sunday without issuing a joint statement due to differences over Russia's invasion of Ukraine, a Japanese minister said.

Japan's trade minister Koichi Hagiuda said the outcome of the two-day meeting in Bangkok, which focused on how to promote economic growth in a post-COVID-19 world, should be reflected in a chairman's statement.

NIIGATA, Japan - Japanese Foreign Minister Yoshimasa Hayashi suggested Sunday that the government may need to consider assisting North Korea as it apparently struggles with the outbreak of the coronavirus.

"We have no diplomatic relations with that country, but it does not mean that we should leave it alone," Hayashi said during a lecture in the city of Niigata.

TOKYO - Taiwan will not be a part of the Indo-Pacific economic framework when the U.S. administration of President Joe Biden launches it next week as a key tool for regional engagement, White House National Security Adviser Jake Sullivan said Sunday.

Whether Taiwan will become a member of the framework, called IPEF, has been drawing attention as the move would likely upset China, which views the island as its own. The framework will be launched on Monday.

TOKYO - U.S. President Joe Biden said Sunday he does not have much to convey to North Korean leader Kim Jong Un other than "Hello...period," as the secretive country seems to be readying a missile or nuclear test during Biden's ongoing Asia tour.

Speaking in South Korea before heading to Japan, Biden asserted that the United States is prepared for "anything North Korea does" and is "not concerned" about a potential nuclear test, which, if conducted, will be the first since 2017 by Pyongyang.

TOKYO - Cityscape-defining Tokyo Skytree, Japan's tallest structure, on Sunday marked the 10th anniversary of its opening to the general public and becoming a symbol of the country's pre-pandemic tourism boom.

Commemorative events celebrating the opening of the 634-meter structure's Tembo Deck and Tembo Galleria observation areas include an ongoing "JoJo's Bizarre Adventure" anime collaboration and a performance by Kabuki actor Ichikawa Ebizo livestreamed on a screen from the tower's topmost point on the day.

TOKYO - An earthquake with a preliminary magnitude of 6.0 struck Fukushima and other prefectures in Japan's east and northeast on Sunday, but there was no threat of a tsunami, the country's weather agency said.

There were no immediate reports of injuries or serious property damage following the quake, which occurred around 12:24 p.m.

The quake's magnitude was later revised upward from the initial estimate of 5.8, the Japan Meteorological Agency said.