Shohei Ohtani hit the first grand slam of his professional career in either Japan or the United States while adding another home run and five total RBIs in the Los Angles Angels' 11-3 victory over the Tampa Bay Rays on Monday.

Ohtani, who is in his fifth season with the Angels, hit a solo homer off lefty Jalen Beeks in the sixth, then followed with a grand slam off right-hander Calvin Faucher in the seventh. Tampa Bay starter Jeffrey Springs (1-1) was pulled after four innings. 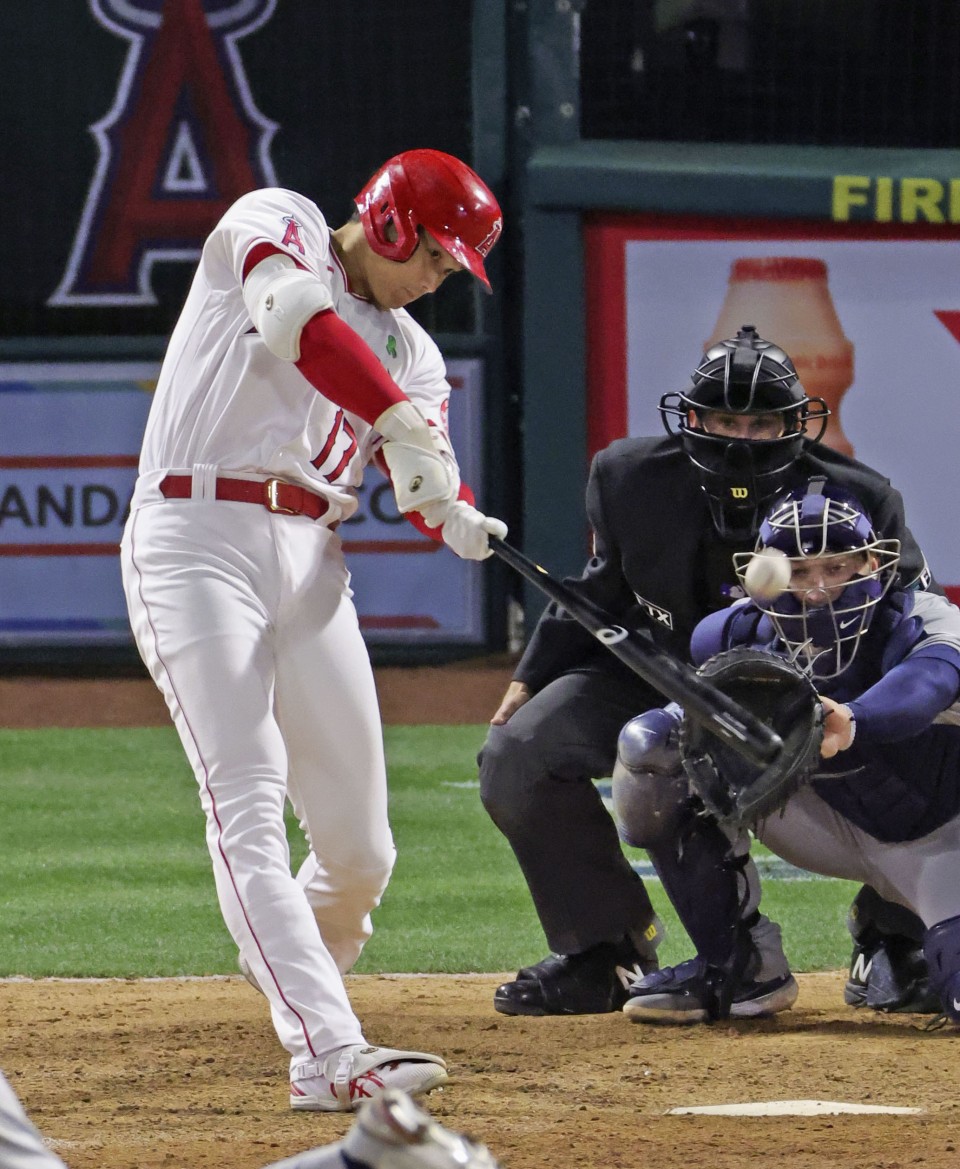 Shohei Ohtani of the Los Angeles Angels hits his first career grand slam in the seventh inning of a baseball game against the Tampa Bay Rays at Angel Stadium in Anaheim, California, on May 9, 2022, his second home run of the night and sixth of the season. (Kyodo) ==Kyodo

"I felt good about my first at-bat (when I flied out) so I'm glad I was able to keep things going and get good results," Ohtani said.

"I was ready to swing at any meaty pitch. I want to make sure every at-bat counts."

Ohtani now has 99 homers in his Major League Baseball career. He hit just four homers in the Angels' first 30 games of this season, well behind the pace he was on last season when he totaled 46 homers.

The stage for Ohtani's grand slam -- his sixth homer of 2022 -- was set when the Angels loaded the bases and scored a run on a bases-loaded walk to Mike Trout that brought Ohtani to the plate.

It was the second two-home run game of the season for Ohtani. The other came on April 15 against the Texas Rangers.

The 27-year-old Japanese went 3-for-4 in the series opener at Angel Stadium on Monday. The Angels' offensive eruption, which included a three-run homer by Jared Walsh and a two-run homer by Mike Trout, backed another strong start by Noah Syndergaard (3-1).

At PNC Park, Yoshitomo Tsutsugo went 2-for-3 with an RBI as the Pittsburg Pirates beat the Los Angeles Dodgers 5-1. Tsutsugo hit an RBI sacrifice fly that gave the Pirates a 1-0 lead in the bottom of the fourth inning.

At Petco Park, Seiya Suzuki went 1-for-3 with a run-scoring double, but he was replaced defensively in the sixth inning due to pain in his right ankle as the Chicago Cubs blanked the San Diego Padres 6-0. 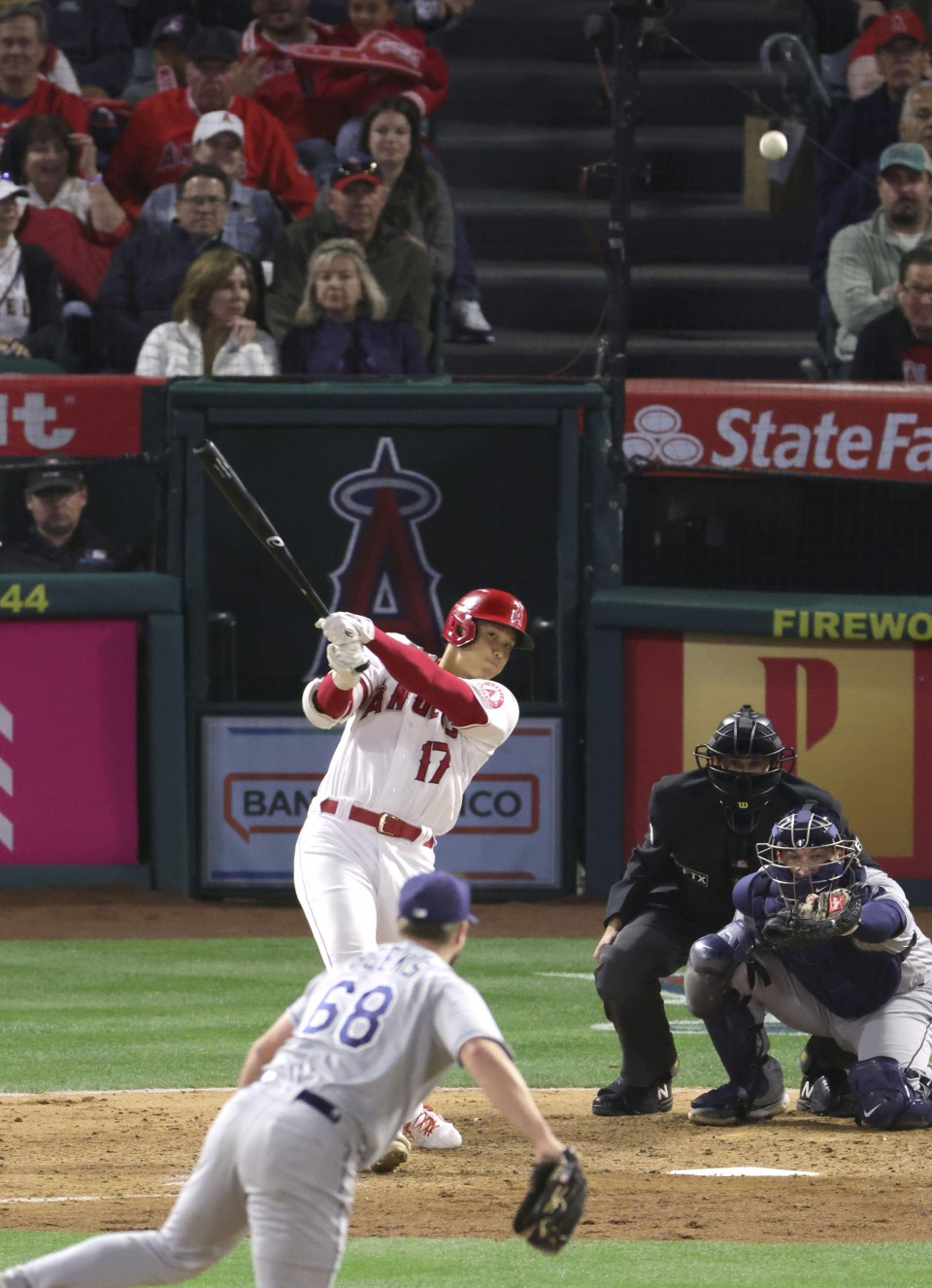 Shohei Ohtani of the Los Angeles Angels hits a solo home run off Tampa Bay Rays reliever Jalen Beeks in the sixth inning of a baseball game at Angel Stadium in Anaheim, California, on May 9, 2022. (Kyodo) ==Kyodo 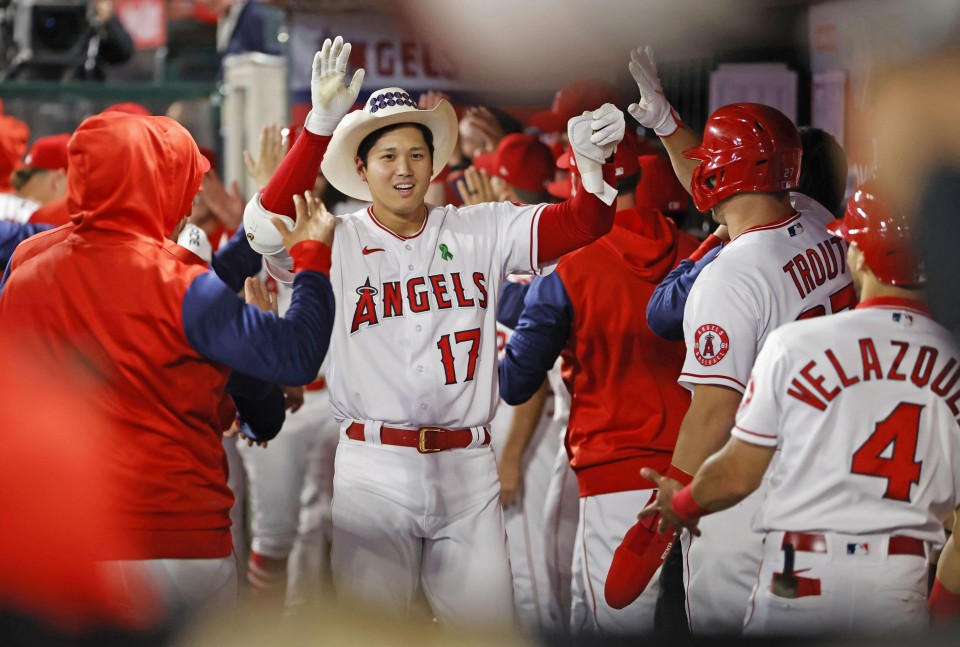 Los Angeles Angels designated hitter Shohei Ohtani (17) is congratulated by teammates after hitting his first career grand slam in the seventh inning of a baseball game against the Tampa Bay Rays at Angel Stadium in Anaheim, California, on May 9, 2022. (Kyodo) ==Kyodo