Yokozuna Terunofuji triumphed to stay a win behind the leaders after 10 days of the Summer Grand Sumo Tournament on Tuesday when No. 4 maegashira Takanosho and No. 15 Ichiyamamoto became the first wrestlers to secure a winning record for the meet.

Terunofuji, on his return after injuries forced him to pull out early from the spring meet in March, still has the Emperor's Cup in sight as he joins four other rank-and-file wrestlers with a 7-3 record after dispatching komusubi Hoshoryu (6-4).

Terunofuji had a tricky opponent in the shape of the nephew of former Mongolian grand champion Asashoryu, but there was only one outcome once he stopped the movement of the nimble komusubi as he crushed him out near the edge of the raised ring at Ryogoku Kokugikan. 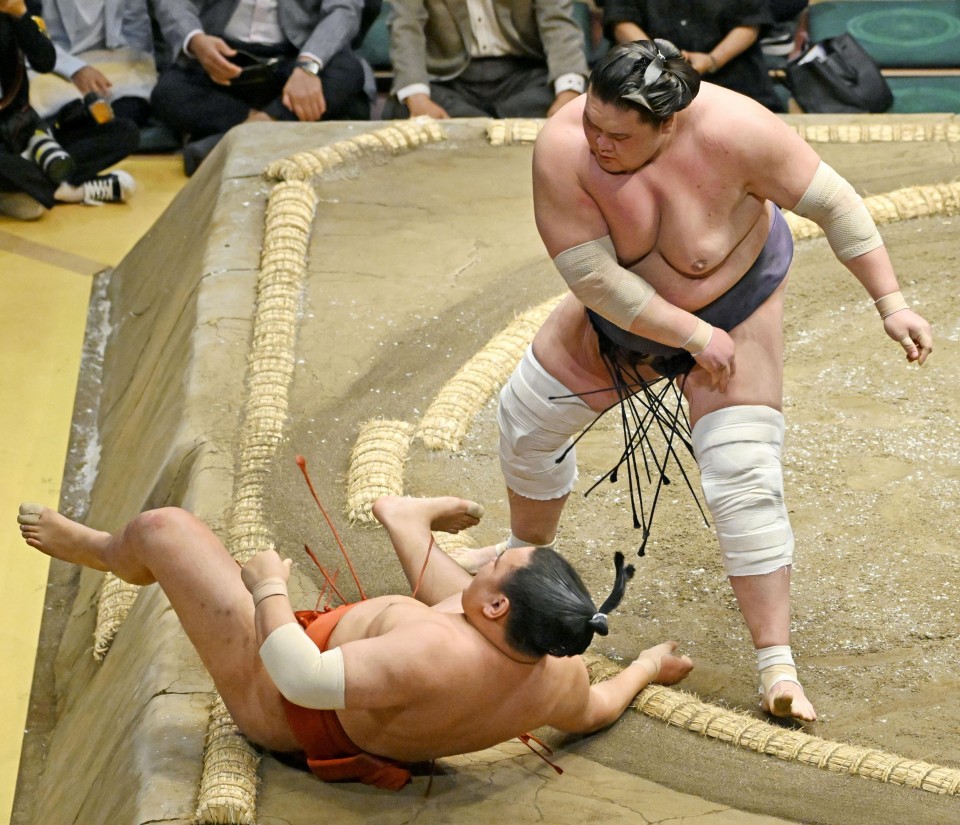 Terunofuji (R) defeats Hoshoryu on the 10th day of the Summer Grand Sumo Tournament on May 17, 2022, at Tokyo's Ryogoku Kokugikan. (Kyodo)

Takanosho (8-2) worked his way around fellow No. 4 Endo (4-6) to secure a winning record, achieved with his seventh straight victory after he began the tournament with two defeats in the opening three days.

Endo's attack to the throat was easily halted by Takanosho, with the former sekiwake bulldozing him out in a fast countercharge to claim a force-out win.

No. 15 Ichiyamamoto (8-2), who started the meet with six straight wins, overcame No. 9 Kotoshoho (5-5) as he clinched a winning record with his third straight victory.

Ichiyamamoto briefly lost his balance after Kotoshoho sidestepped off the initial charge, but the in-form wrestler repeated the trick himself a moment later to leave his rival teetering near the edge before thrusting him out.

No. 11 Aoiyama (7-3) took a step back from the leading pack as he was toppled by diminutive No. 16 Midorifuji (6-4), who swiftly outflanked the giant Bulgarian with an under-shoulder swing down.

No. 12 Sadanoumi (7-3) also took a loss after the veteran was outmuscled by former ozeki Tochinoshin (6-4). Tochinoshin, who grabbed both belt holds, stood his ground by the edge before the No. 9 Georgian swiveled Sadanoumi to force him out.

No. 2 Kiribayama (7-3) weathered a storm from Abi (5-5) to stay in the mix, navigating the ozeki's attack to his throat and showing good footwork before slapping him down.

No. 6 Ura (7-3) could not show his usual tricks but still managed to snatch victory, his last-ditch under-shoulder swing down turning the table against No. 10 Nishikigi (4-6).

Ozeki Takakeisho (5-5) backed off easily after No. 3 Hokutofuji matched him on the initial charge and suffered a push-out defeat.

Sekiwake Wakatakakage (5-5) was watertight as the Spring meet champion handed Shodai (3-7) another defeat. The ozeki did his best to stay inside the ring but was forced out as aggressive Wakatakakage kept up the pressure with solid drives.

Komusubi Daieisho (6-4) had no answer to a powerful barge from No. 1 Takayasu (2-8) but was gifted a win after the former ozeki lost his footing at the death.

Takayasu, who missed out on his maiden title in March, touched the sand outside the straw bales with his hand as he fell to the floor and was tagged with a losing record for the meet.

In the third-tier makushita division, Ukrainian No. 7 Shishi and Russian No. 4 Roga both drew warm cheers from the crowd as their names were called out before they went head-to-head.

Roga won the heated encounter with an underarm throw and there was another cheer when he was named the winner by the referee on the raised ring.

Roga improved to 2-3, while Shishi's losing record for the meet was confirmed as he fell to 1-4. Makushita, like other lower divisions, is competed over seven bouts per meet, unlike 15 in the top-tier makuuchi and second-tier juryo.

According to the Japan Sumo Association, the 25-year-old Shishi is from Melitopol in southern Ukraine and he is fighting in his highest rank to date at the ongoing meet after making his debut in March 2020.

Roga, 23, was born to a Mongolian father and a Russian mother. He grew up in Tuva in southern Russia until he was 14 and has also lived in Mongolia.

Roga became the Japanese high school champion while studying in Tottori Prefecture in western Japan before his professional sumo debut in November 2018.