Japanese Prime Minister Fumio Kishida and British Prime Minister Boris Johnson agreed in principle Thursday on a defense cooperation pact as part of their efforts to realize a free and open Indo-Pacific, in a veiled counter to an increasingly assertive China.

A reciprocal access agreement, when signed, would enable faster deployment of their troops and allow them to engage in joint training and disaster relief efforts. Japan recently signed a similar RAA with Australia.

Kishida highly appreciated Britain's increased involvement in the Indo-Pacific region, and the two leaders expressed "strong concern" about unilateral attempts to change the status quo in the East and South China seas and "rapid but not transparent" military build-up and activities, the Japanese government said. 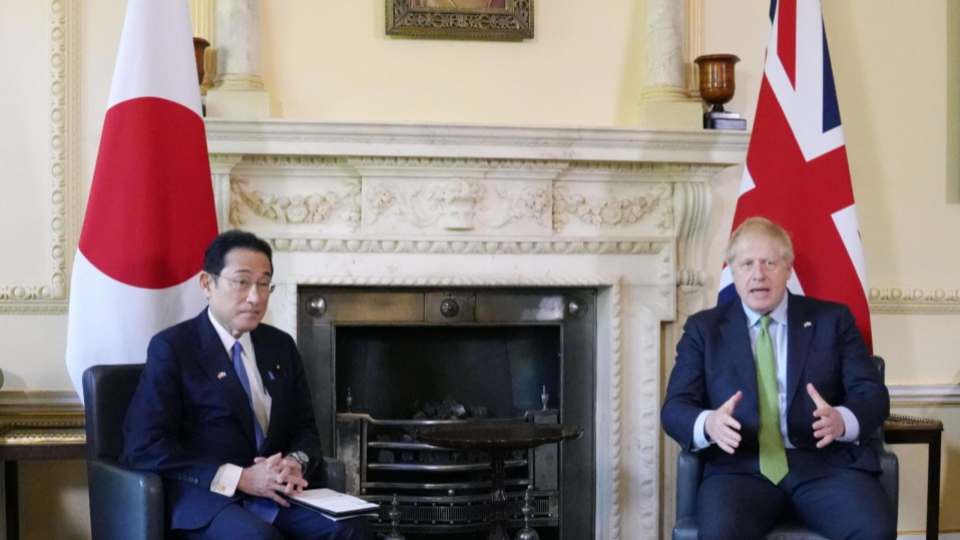 The two leaders agreed to resolutely counter such unilateral attempts or economic coercion, the government said, without singling out China, the world's second-largest economy that has been attempting to expand its sphere of influence with its military and economic clout.

"Ukraine may be tomorrow's East Asia," Kishida said at a press conference in London after meeting with Johnson. "Russia's aggression is not an issue only for Europe. The international order encompassing the Indo-Pacific is at stake."

In that respect, Kishida said, "It is a major outcome that Prime Minister Johnson and I reached an agreement in principle" on the defense pact.

Russia's invasion of Ukraine was another major agenda item for the summit talks. Japan, for its part, has raised the alarm about the ramifications for Asia of the unfolding crisis in Ukraine, especially in light of China's perceived desire to seize Taiwan, by force if necessary.

Kishida and Johnson agreed on the need for their two countries and other members of the Group of Seven nations to lead the international community in maintaining sanctions against Russia and extending support to Ukraine.

Expanding Japan's sanctions regime, the assets of more Russian banks and about 140 additional individuals will be frozen and an export ban will target around 70 additional military entities, Kishida said.

The G-7 leaders are expected to discuss further sanctions later this week, U.S. President Joe Biden said, after the European Union unveiled plans to phase out Russian oil imports by the end of this year.

Throughout his five-nation trip to Britain, Italy, Indonesia, Thailand and Vietnam, Kishida sought coordination with his counterparts in responding to the Ukraine crisis and achieving a "free and open" Indo-Pacific.

London, in particular, has been strengthening its commitment to the region in view of its economic and geopolitical importance.

The broad agreement on defense cooperation with Japan apparently reflects Britain's tilt toward the Indo-Pacific.

An RAA, together with an acquisition and cross-serving agreement that enables nations to share ammunition and supplies, serves as the foundation to enhance security cooperation.

Trade was also another topic as Britain, which exited the EU in 2020, is now seeking to join the 11-member Trans-Pacific Partnership free trade pact.

Japan is a member of what is formally known as the Comprehensive and Progressive Agreement for Trans-Pacific Partnership and has welcomed Britain's planned accession.

Japan will work with Britain in persuading the United States to return to the trade deal following its abrupt withdrawal before it took effect under Biden's predecessor Donald Trump, Kishida said at the press conference.

In Thursday's summit, Johnson told Kishida that he expects the British government will lift its import ban on Japanese food by the end of June, according to the Japanese government.

Such restrictions have been in place since the Fukushima nuclear accident in 2011.

Kishida and Johnson also confirmed they will work together in helping Asian nations develop renewables in their transition to green energy and providing alternative supplies to Russian oil and gas.