Japan attacker Daichi Kamada and former Samurai Blue captain Makoto Hasebe will battle for the Europa League title after their Eintracht Frankfurt side completed a 3-1 aggregate win over English Premier League outfit West Ham in the semifinals of the continental tournament on Thursday.

Following a 2-1 win in the opening leg in London, Eintracht wrapped up the tie in front of a raucous home crowd, beating 10-man West Ham 1-0 on Colombian forward Rafael Borre's 26th-minute strike. 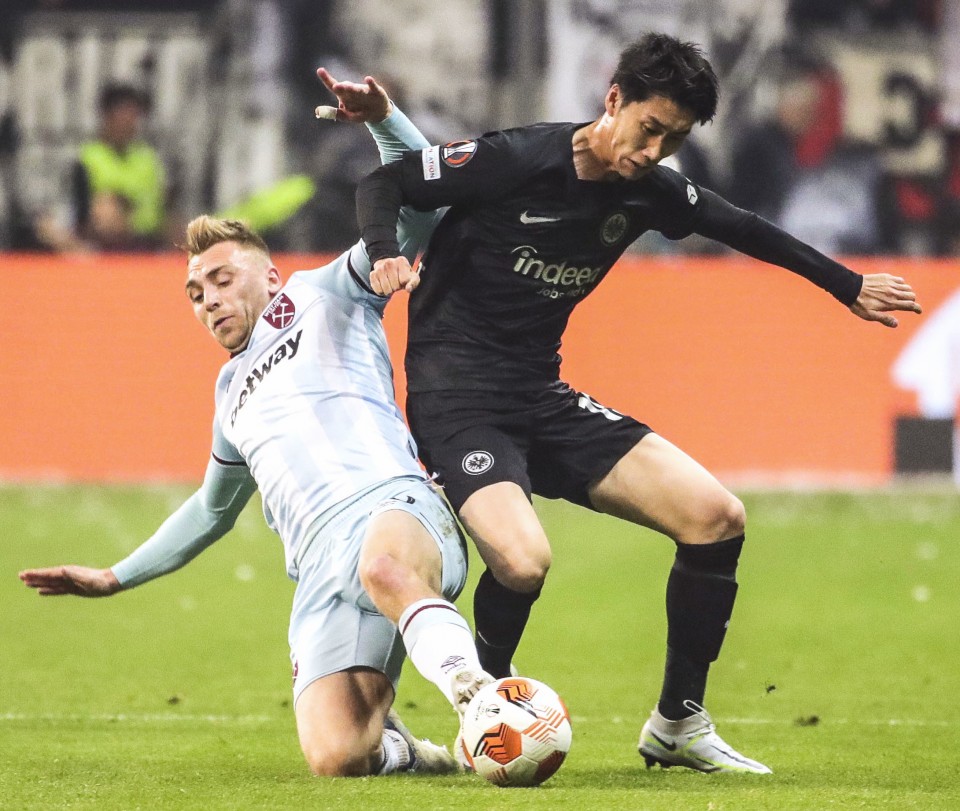 Daichi Kamada (R) of Eintracht Frankfurt in action during the Europa League semifinals against West Ham on May 5, 2022, in Frankfurt, Germany. (Kyodo)

Kamada, who scored Frankfurt's winner in the opening leg on April 28, played a crucial role once again in the return-leg victory.

Looking to spark an attack in the 17th minute, he launched a probing long ball that sent Jens Petter Hauge through on goal before the Norwegian was dragged down at the edge of the area by West Ham defender Aaron Cresswell.

That foul earned Cresswell a red card and the home side a man advantage with more than 70 minutes left to play. They capitalized quickly, with Borre tapping home from the middle of the area after Ansgar Knauff found him unmarked.

Kamada logged 90 minutes for Oliver Glasner's Eintracht side, while Hasebe remained on the bench.

A frustrated West Ham boss David Moyes was sent from the touchline late in the match, with his side unable to overcome the numerical disadvantage.

The Eagles will contest the May 18 Europa League final in Seville against Scottish Premiership side Rangers, who came back to beat Germany's RB Leipzig 3-2 on aggregate following a 3-1 second-leg victory in Glasgow.