A delegation of youth division members of Japan's ruling Liberal Democratic Party reaffirmed the importance of peace and stability in the Taiwan Strait in terms of the security of Tokyo and Taipei in talks Thursday with Taiwan President Tsai Ing-wen.

Diet member Norikazu Suzuki of the delegation expressed opposition in the talks to Russia's invasion of Ukraine and told Tsai that Japan is against any unilateral change to the status quo by force, describing Taiwan and Japan as "two countries" geographically close to each other. 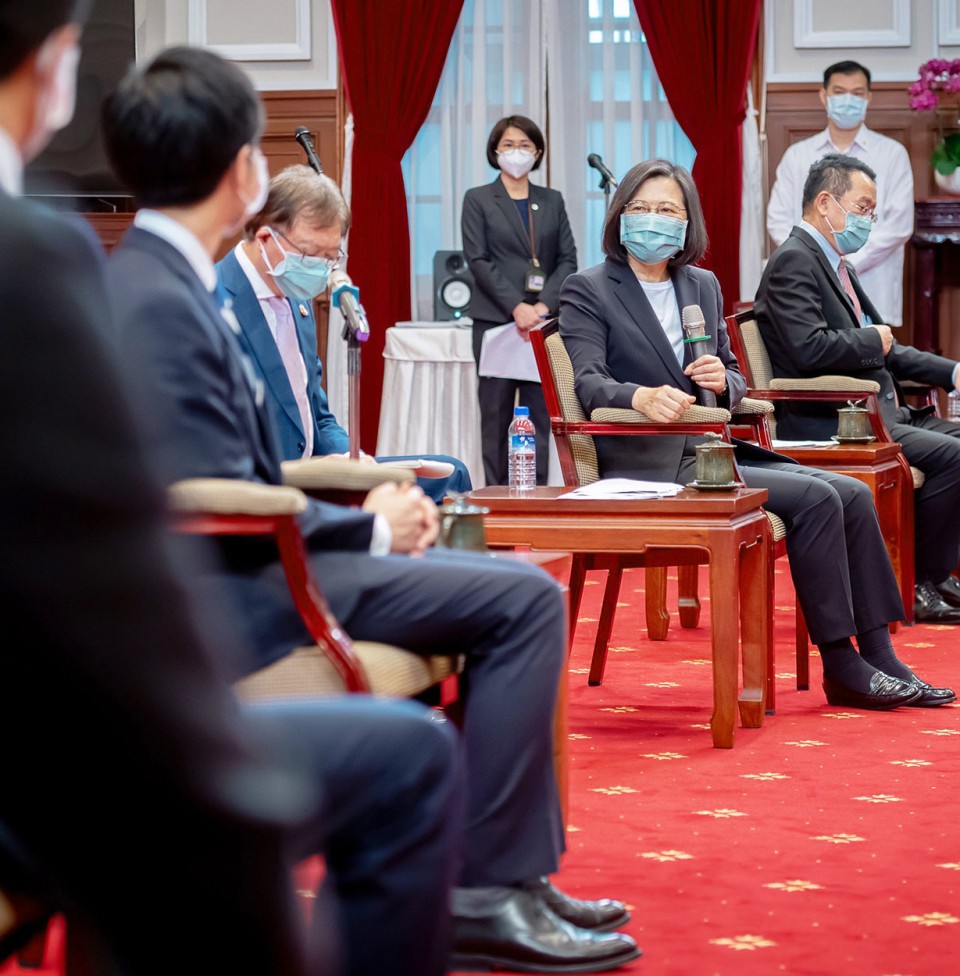 Taiwan President Tsai Ing-wen (2nd from R) holds talks with members of a delegation from Japan's ruling Liberal Democratic Party in Taipei on May 5, 2022. (Photo courtesy of Taiwan's presidential office)(Kyodo)

Tsai agreed, citing former Japanese Prime Minister Shinzo Abe's comment in December that any emergency concerning Taiwan would be an emergency for Japan and for the Japan-U.S. security alliance.

A security issue for Taiwan or for Japan is one "concerning not only one single country but that of the first island chain and the region as a whole," she said, stressing Taiwan hopes to work with Japan to further contribute to peace and stability in the Asia-Pacific region.

The so-called "first island chain" is viewed by the United States and its allies as a strategic line of defense formed by the Aleutians, the Kurile Islands, the Japanese archipelago, the Ryukyu Islands, Taiwan, the Philippines and Borneo.

Amid Russia's ongoing aggression on Ukraine, some defense experts fear the war could embolden China to attack Taiwan, which Beijing regards as a renegade province and has vowed to reclaim, by force if necessary.

Meanwhile, Tsai also expressed hope Japan will support Taiwan's participation in international frameworks such as its bid to join a free trade agreement formally known as the Comprehensive and Progressive Agreement for Trans-Pacific Partnership.

In response, Suzuki, a 40-year-old member of Japan's House of Representatives, commended Taiwan's efforts to amend laws and regulations to meet standards of the free trade agreement, promising to play a role in helping out the bid.

The delegation led by Masanobu Ogura, head of the LDP's youth division, arrived in Taiwan on Wednesday for a five-day visit.