A sightseeing boat that sank off Hokkaido a month ago, leaving 14 people dead and 12 missing, dropped back to the seabed at a depth of 182 meters as a salvage company was attempting to tow it, the Japan Coast Guard said Tuesday, in a setback to efforts to bring it to port for an investigation into the cause of the accident.

The company will operate an underwater drone to attach nylon belts to the boat on Wednesday and plans to raise it the next day.

Nippon Salvage Co. was scheduled to tow the 19-ton Kazu I to shallow waters to load it onto a barge and drain it of seawater for several days before transporting it to the nearby port of Abashiri. 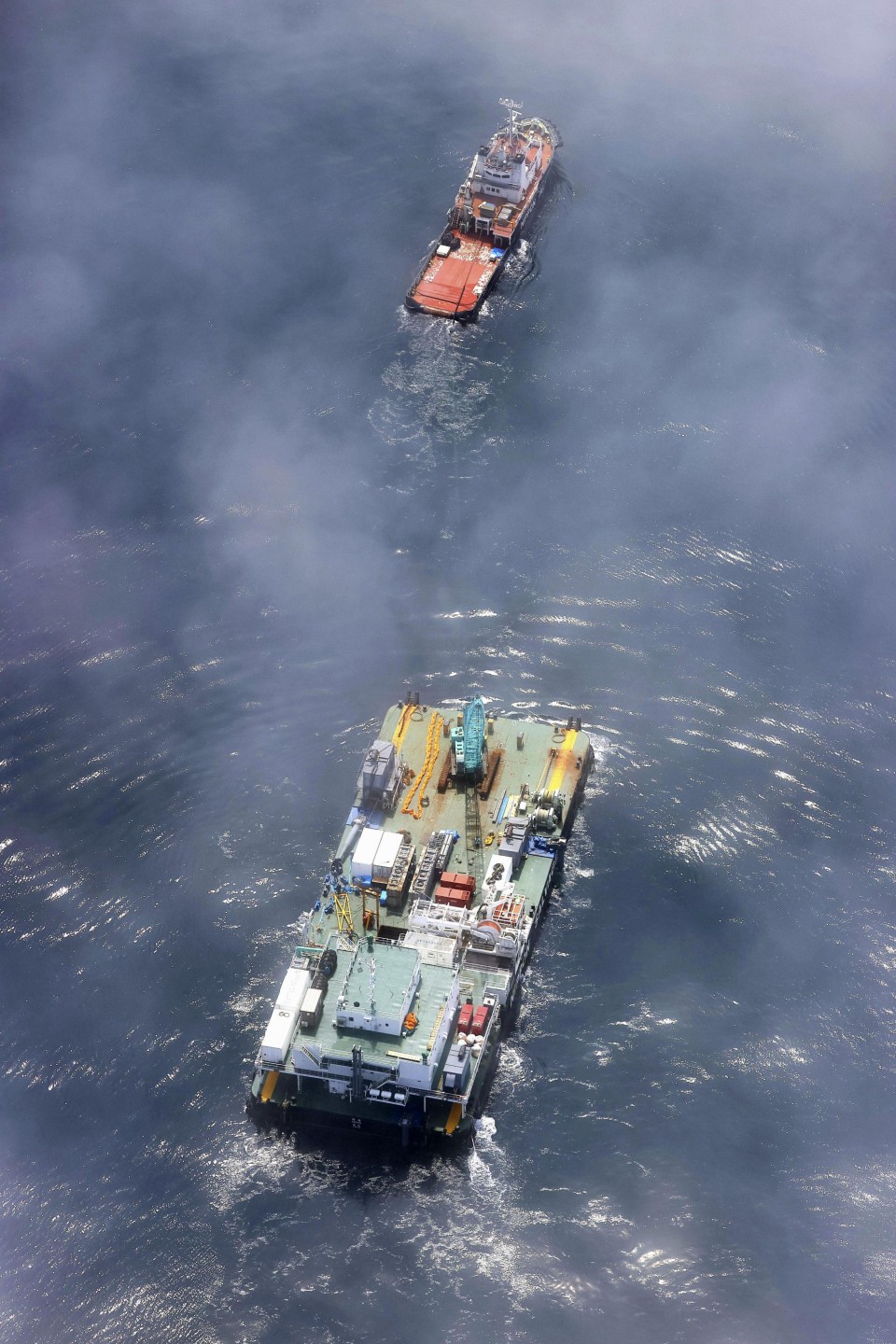 Photo taken May 24, 2022, from a Kyodo News helicopter shows the barge Kaishin (bottom) off the Hokkaido town of Shari, northern Japan. A sightseeing boat that sank off Hokkaido around a month earlier dropped deeper into the sea the same day while being towed by a salvage company for loading onto the barge. (Kyodo) ==Kyodo

It had been towing the boat slowly at a depth of around 20 meters, but the coast guard was told by the company Tuesday morning that the vessel had fallen. The company had pulled it from a depth of some 120 meters the previous day.

The coast guard confirmed the boat is now on the seabed about 11 kilometers west off Utoro port in Shari, where the ship left for the sightseeing trip. It said the vessel appears intact, adding that the current was relatively fast near the site.

Two of the five nylon belts attached to the vessel for towing were found to be broken, according to the coast guard.

The boat was found on April 29, six days after going missing in rough waters.

At Abashiri port, the coast guard intends to launch a full-fledged investigation into the cause of the accident and possibly find clues about the fate of the 12 people still unaccounted for.

The transport ministry, meanwhile, said it intends to revoke the boat operator's license next month after confirming violations of 17 safety regulations, in what would be the heaviest administrative penalty ever imposed under the maritime transportation law.

The violations include the operator's president, who doubles as its operations manager, not fulfilling an obligation to stay in the office while the tour was under way and the captain failing to cancel the outing despite a forecast of bad weather, the ministry said.

The operator also had a deficient communication system, as cellphones, which had been designated as the primary means of communication with the boat, were out of signal range on the vessel for most of its routes, according to the ministry.

"There is no sense of improvement in the safety management system, and it is highly likely that a serious accident would occur again if we allow the operation to continue as it is," transport minister Tetsuo Saito told a press conference in Tokyo.

The ministry will conduct a hearing with the Shari-based boat operator on June 14 before imposing the punishment, it said. 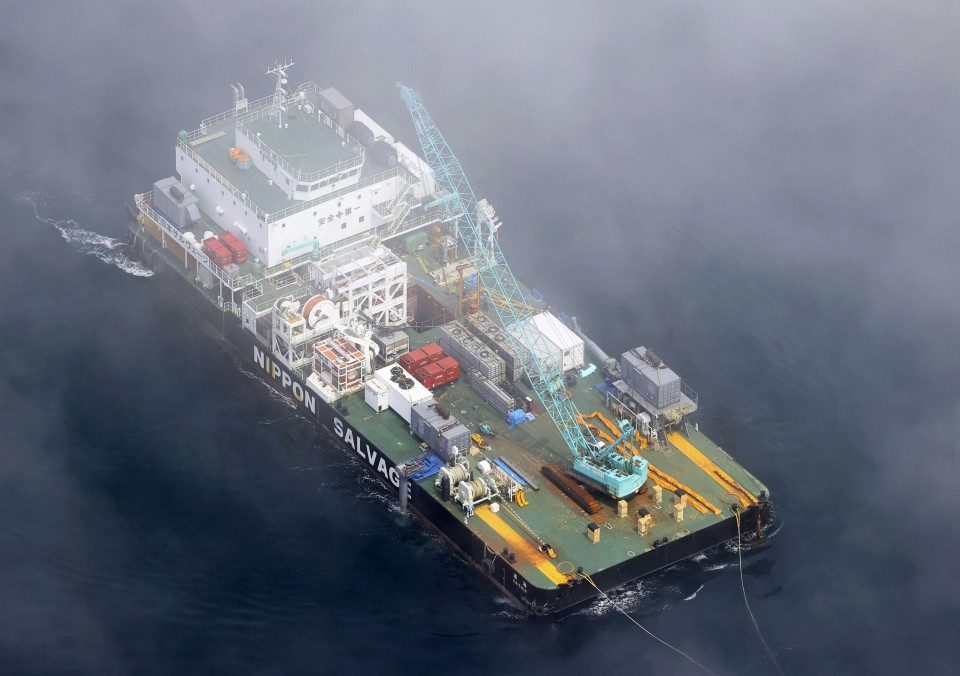 Photo taken May 24, 2022, from a Kyodo News helicopter shows the barge Kaishin off the Hokkaido town of Shari, northern Japan. (Kyodo) ==Kyodo 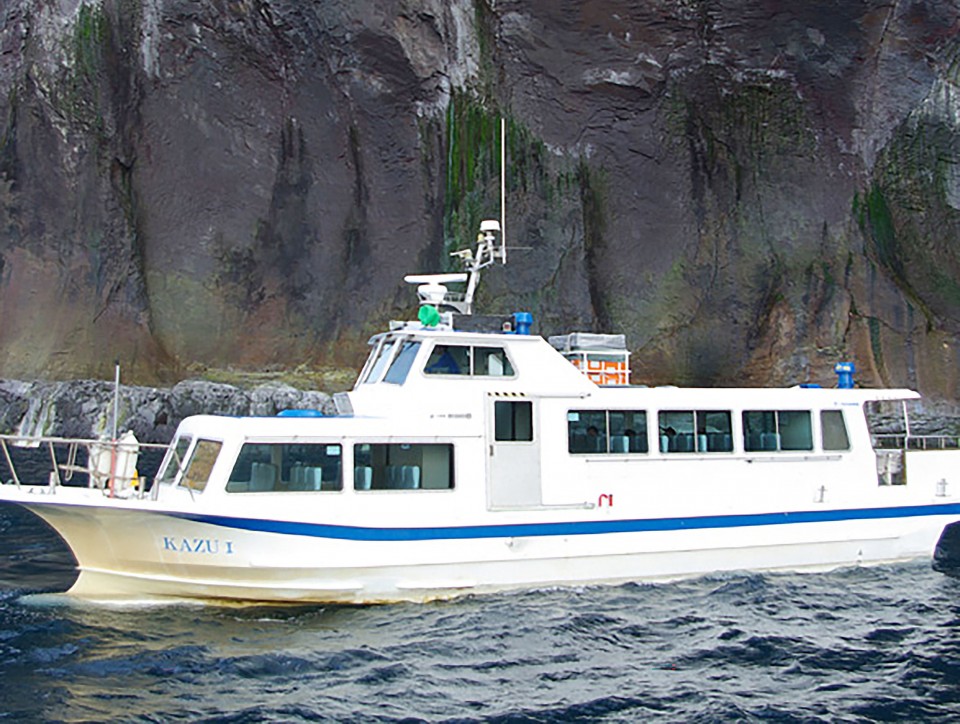 Photo from the homepage of Shiretoko Yuransen shows the tourist boat Kazu I. (Kyodo)

The coast guard is continuing its search for the missing people using patrol vessels and aircraft after deepwater divers ended their two-day search inside the boat last week, finding no trace of the missing.

The Japanese government is also exchanging information with Russian authorities after two bodies, possibly of the missing, were found washed up on Kunashiri, one of four Russian-controlled islands off Hokkaido that are at the heart of a territorial dispute with Japan.

Russian authorities found a backpack containing a credit card under the name of one of the dead, and it was due to be returned to the bereaved family on Tuesday night, the coast guard said.

Coast guard investigators suspect the shipwreck was caused by gross professional negligence on the part of the tour operator's president, Seiichi Katsurada, and the sunken boat's skipper, Noriyuki Toyoda, who remains missing.