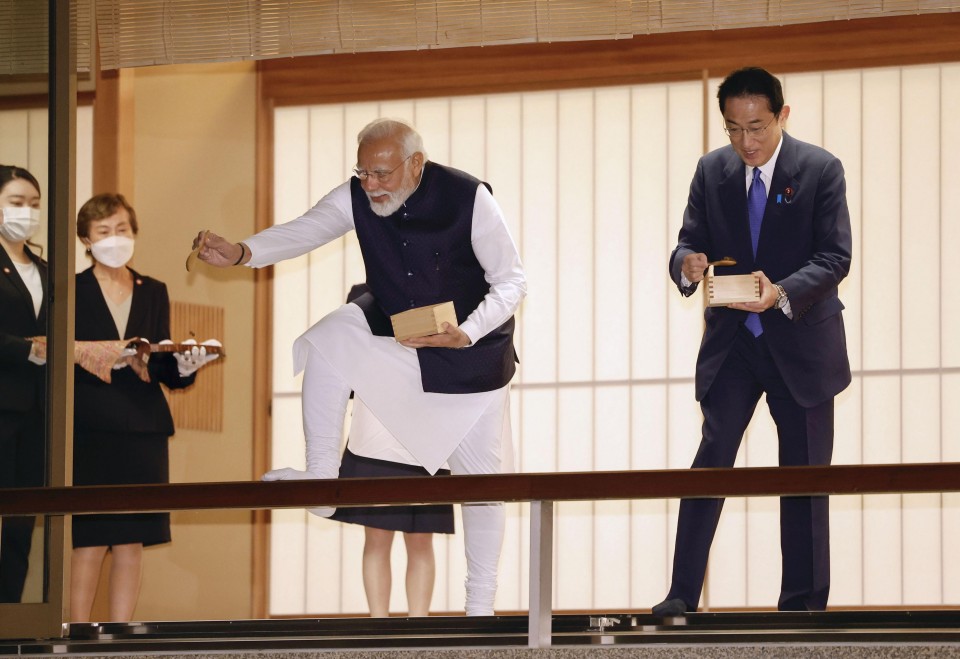 Japanese Prime Minister Fumio Kishida (R) and Indian Prime Minister Narendra Modi feed the carp in a pond at the State Guest House in Tokyo following their meeting there on May 24, 2022. (Kyodo) ==Kyodo

SEOUL/TOKYO - North Korea fired three missiles, including one capable of intercontinental range, off its east coast on Wednesday, according to the South Korean government, a day after U.S. President Joe Biden ended his first Asia trip since taking office, vowing to team with allies to deter Pyongyang from further provocations.

The move comes after reports earlier this year that U.S. investment fund Bain Capital was mulling a possible acquisition of Toshiba. The Japanese firm has been looking for potential sponsors to take it private amid uncertainties over its future after reform plans to split fell through.

TOKYO - Up to around 6,100 people would die in the event a major earthquake hits the heart of Tokyo, the metropolitan government said in a report Wednesday, revising down the estimate by around 30 percent from a decade ago.

The report by the metropolitan government's panel of earthquake experts attributes the reduction of about 3,500 people to advances in the quake resistance of buildings and the greater use of non-combustible materials in their construction.

Japan agrees with Singapore, Malaysia to work together on IPEF

TOKYO - Japan agreed with Singapore and Malaysia on Wednesday to work together to address issues related to a new U.S.-led Indo-Pacific economic framework, an initiative apparently intended to counter China's growing influence in the region.

Foreign Minister Yoshimasa Hayashi met separately with his Singaporean and Malaysian counterparts in Tokyo and vowed to strengthen bilateral ties toward a "free and open Indo-Pacific," a vision advocated by Tokyo and Washington to counter Beijing's military clout, according to Japan's Foreign Ministry.

Xi asks U.N. not to interfere in China internal affairs over Xinjiang

Xi's remarks came during an online meeting with U.N. High Commissioner for Human Rights Michelle Bachelet, who began an official trip to China this week and is scheduled to visit the country's far-western autonomous region soon.

TOKYO - Japan has conveyed "grave concern" to China and Russia over a flight of strategic bombers during a Quad summit held in Tokyo, the government said Wednesday.

Six Chinese and Russian strategic bombers flew over the Sea of Japan, the East China Sea and the Pacific on Tuesday in apparent protest at the meeting that day of the leaders of Japan, the United States, Australia and India.

"Uncertainty over the economic outlook has grown following the destabilization of prices and supply of crude oil and grain," Suzuki said as he explained the urgent need to enact the 2.7 trillion yen ($21 billion) additional budget for the year that started in April.

TOKYO - The government said in a monthly report Wednesday that the Japanese economy is recovering from the pandemic, with the word "coronavirus" not included in its assessment for the first time in more than two years.

"The Japanese economy shows movements of picking up," the Cabinet Office report said in its basic assessment, dropping the words "as the severe situation due to the novel coronavirus is easing" that followed the line in last month's report.