Nissan Motor Co. said Friday it will launch a new electric minivehicle co-developed with Mitsubishi Motors Corp. this summer as the two automakers aim to boost their share of the domestic market for popular lightweight cars.

Nissan and its partner Mitsubishi Motors jointly developed the new EV, to be sold under their respective brand names, to lower production costs and make a more affordable addition to their lineup of minivehicles, which offer tax advantages to consumers. 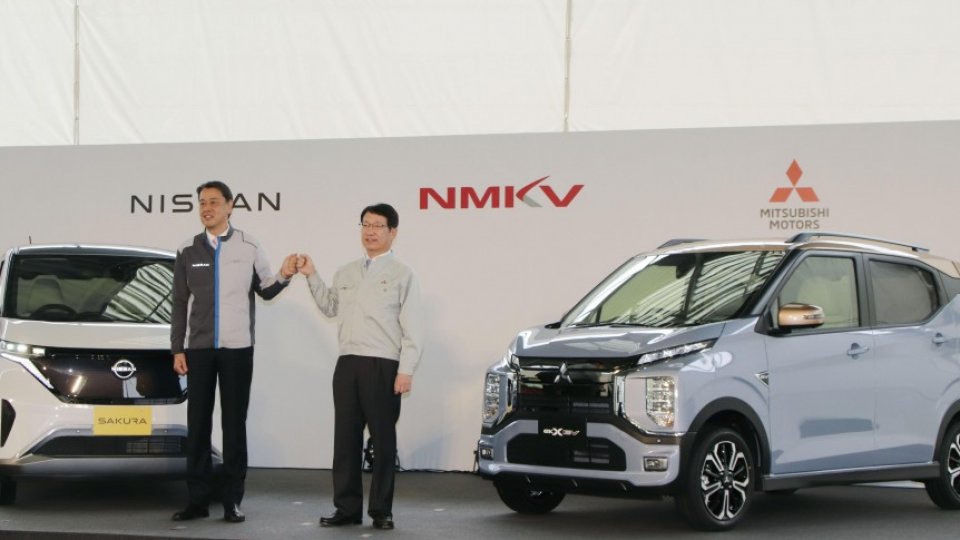 Nissan Motor Co. President and CEO Makoto Uchida (L) and his Mitsubishi Motors Corp. counterpart Takao Kato pose for photos in the Okayama Prefecture city of Kurashiki, western Japan, on May 20, 2022, as they introduce their jointly developed new mini electric vehicle, to be launched as the Nissan Sakura and Mitsubishi Motors eK X EV. (Kyodo) ==Kyodo

The minivehicles are unique to the Japanese market, accounting for about 40 percent of autos registered in the country. They are limited to 3.4 meters in length, 1.48 meters in width and 2.0 meters in height. For gasoline engine minivehicles, their maximum engine displacement is set at 660 cc.

The new model, to be sold by Nissan as the Sakura and by Mitsubishi Motors as the eK X EV, will have a driving range of up to 180 kilometers, the two companies said.

"We have gathered the electrification technologies that Nissan has developed until now," Nissan President and CEO Makoto Uchida said at a ceremony held at Mitsubishi Motors' Mizushima Plant in Okayama Prefecture, western Japan.

Takao Kato, the president and CEO of Mitsubishi Motors, said the new model is a "next-generation" product as Japan tries to achieve carbon neutrality.

The model is the first mass-production electric minivehicle for Nissan. It is scheduled to go on sale in Japan this summer, with the price starting at approximately 1.78 million yen ($13,900), including tax and taking into account the government's clean energy vehicle subsidy, Nissan said.

The price for Mitsubishi's model will start at 1.84 million yen.

Global automakers are ramping up efforts to boost their development and offerings of electric vehicles and play their part in global efforts to reduce carbon dioxide emissions.

Toyota Motor Corp., the world's No. 1 carmaker by volume, said in December it will spend 8 trillion yen by 2030 for electrification of its vehicles as it raised its global EV sales target to 3.5 million EVs for that year.

Honda Motor Co. said last month it will launch 30 EV models globally by 2030. The Japanese automaker aims to put an electric minivehicle on the market in the first half of 2024.

Suzuki Motor Corp. and Daihatsu Motor Co. each plan to launch an electric minivehicle by 2025.