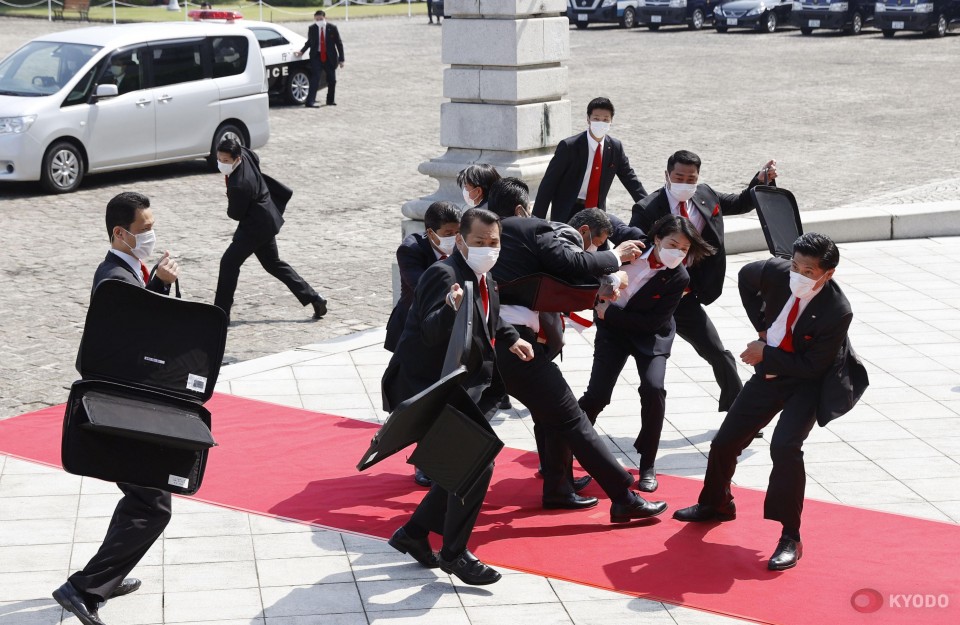 The Metropolitan Police Department conducts a drill in Tokyo on May 18, 2022, ahead of a summit in the Japanese capital on May 24 of the "Quad" group of Indo-Pacific democracies -- the United States, Japan, Australia and India. (Kyodo) ==Kyodo

TOKYO - Japan and the United States plan to announce their "shared ambition" to realize a future Moon landing by a Japanese astronaut in a document to be released during U.S. President Joe Biden's visit to Tokyo, sources close to the matter said Thursday.

The announcement, to be made by Prime Minister Fumio Kishida and Biden, will be part of the Artemis project, an international effort led by the United States aimed at advancing lunar exploration and eventually sending astronauts on missions to Mars.

SAPPORO - Deepwater divers on Thursday began search operations at the site of a tour boat that sank off Hokkaido in April, aiming to get to the bottom of the accident that left 14 people dead and 12 still unaccounted for.

The divers will conclude the task of searching for those missing as early as Friday, according to the Japan Coast Guard. They are using a special technique known as saturation diving, in which they absorb a mix of oxygen and helium so they can adjust to the water pressure at the depth they intend to work at.

He inspected tanks storing treated water and an advanced liquid processing system that removes most radioactive materials from contaminated water except for tritium, during his first visit to the crippled plant since February 2020.

SEOUL - South Korea's intelligence agency said Thursday that North Korea is ready to conduct another nuclear test, according to lawmakers on the National Assembly's Intelligence Committee.

"Preparations for a nuclear test are now complete and (Pyongyang) is looking for the right timing," one of the lawmakers said after the briefing by the National Intelligence Service.

TOKYO - A Japanese court on Thursday ordered a Tokyo medical school to pay around 8.05 million yen ($63,000) in damages to 13 women for rigging its entrance exams in favor of male candidates, in what is believed to be the first ruling of its kind following a series of manipulations of exam results found in Japan.

The Tokyo District Court ruled that the women had suffered emotional distress as a result of Juntendo University's gender-based discrimination, awarding each between 300,000 yen and 900,000 yen in compensation. The plaintiffs had sought a combined 54 million yen.

Imports jumped 28.2 percent from a year earlier to 8.92 trillion yen, the highest since comparable data became available in January 1979, according to a preliminary report by the Finance Ministry.

TOKYO - Japan will provide an additional $300 million in financial assistance to Ukraine, Prime Minister Fumio Kishida said Thursday, as the country faces an economic crisis due to Russia's invasion.

"We have received calls for short-term funds support from the Ukrainian side as the fiscal situation has deteriorated due to Russia's invasion," Kishida told reporters in Tokyo.