No. 4 maegashira Takanosho fell to his third defeat and lost his outright lead at the Summer Grand Sumo Tournament on Friday as yokozuna Terunofuji and No. 12 Sadanoumi both won to share the lead after 13 days of action.

Former sekiwake Takanosho (10-3) never looked convincing against sekiwake Wakatakakage (7-6) as he lost his footing before hitting down at Ryogoku Kokugikan in a loss to March's champion. 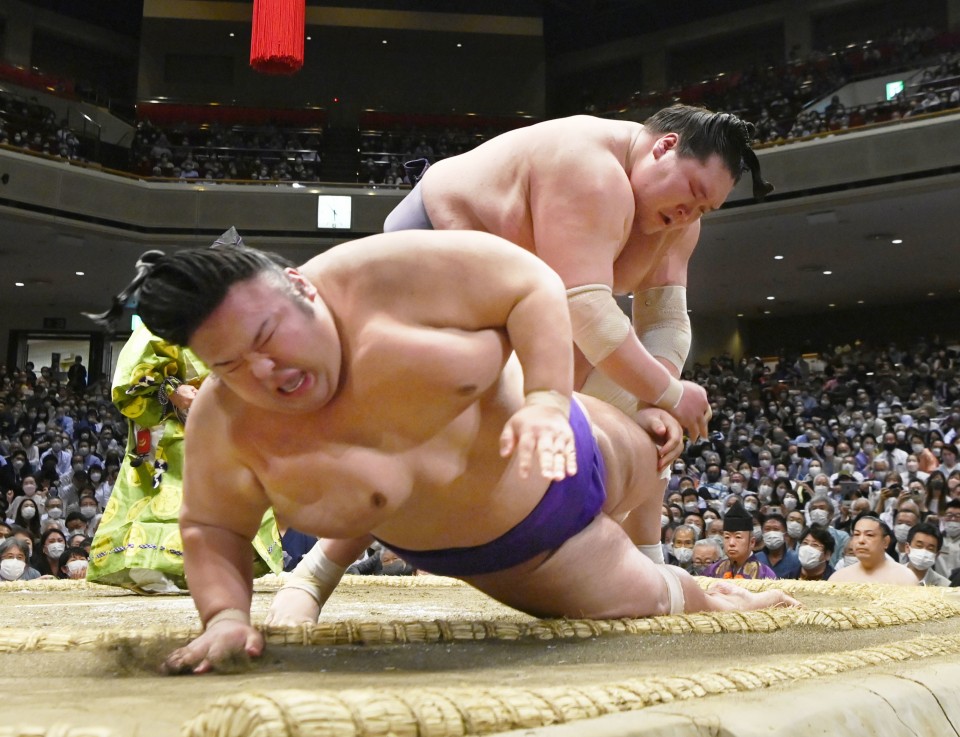 Grand champion Terunofuji (back) defeats ozeki Takakeisho on the 13th day of the Summer Grand Sumo Tournament on May 20, 2022, at Tokyo's Ryogoku Kokugikan. (Kyodo) ==Kyodo

Takanosho made a brief shove to Wakatakakage's throat but ceased to apply further pressure and backed off. The sekiwake drove forward instead and Takanosho, who made a slight slip, could not stay on his feet as he was pulled down.

Terunofuji (10-3), meanwhile, was made to work thanks to a lively effort from ozeki Takakeisho (6-7) but eventually claimed the all-important win to take the share of the lead.

Takakeisho's powerful charge and sidestepping move left Terunofuji facing sideways but the ozeki's ensuing attacks failed to materialize, leaving both wrestlers squaring off in a standstill in the middle of the raised ring.

Takakeisho broke the deadlock, clapping his hands in front of Terunofuji's face before making a low charge, but the surprise tactics had no effect. The grand champion weathered the assault, grabbed a belt hold and crushed Takakeisho out.

No. 12 Sadanoumi (10-3) stayed in the title race after the 35-year-old veteran came out on top with an emphatic crush-out win over komusubi Hoshoryu (7-6).

Sadanoumi navigated a sharp opening charge from the nephew of former Mongolian grand champion Asashoryu and drove to the edge. Hoshoryu showed tenacity as each wrestler tried to throw the other over at the straw, but Sadanoumi kept his body above his opponent's to secure the huge win.

Four wrestlers are a win behind at 9-4. 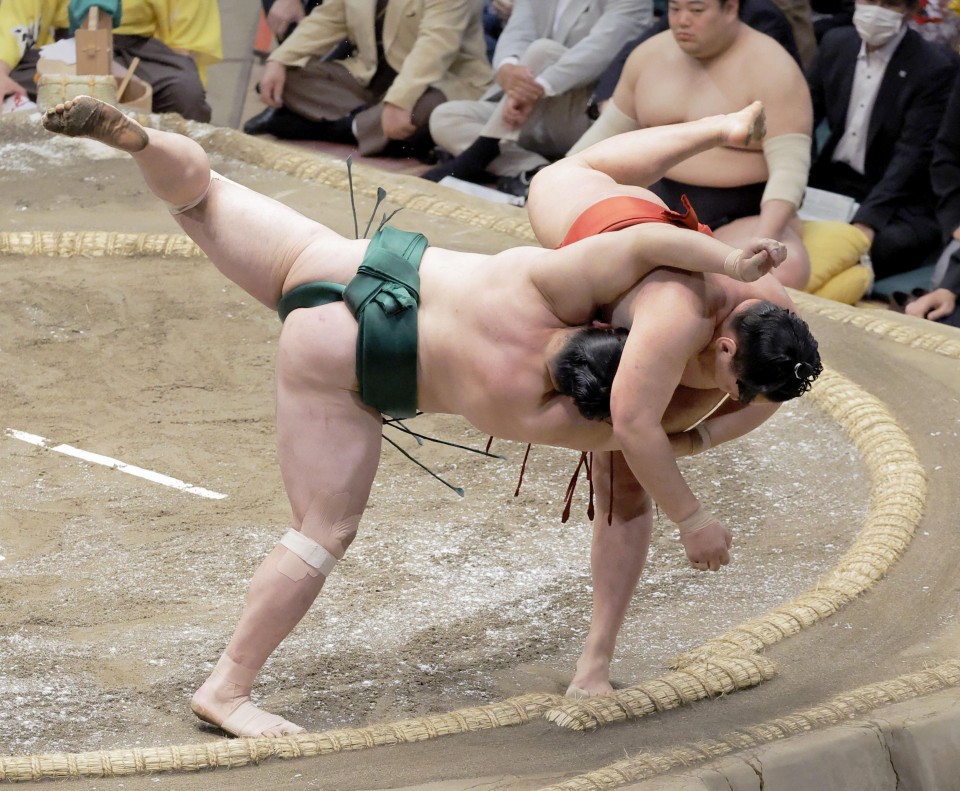 Sadanoumi (L) defeats Hoshoryu on the 13th day of the Summer Grand Sumo Tournament on May 20, 2022, at Tokyo's Ryogoku Kokugikan. (Kyodo) ==Kyodo

No. 6 Ura (9-4) missed out on joining the leading pack after he failed to spin away from sekiwake Abi's long reach.

The bouncy trickster hunkered low before the initial charge to surprise Abi (7-6) but could not get near his opponent's belt and eventually got pushed out.

Komusubi Daieisho (9-4) overpowered fellow in-form wrestler No. 15 Ichiyamamoto (8-5) with his thrusts before pulling him down to the sandy surface to stay in the title race.

Mitakeumi (6-7) survived the battle of two struggling ozeki, sending Shodai (5-8) to a losing record with a hard-fought force-out win.

Shodai -- as he was in March -- will be a demotion-threatened "kadoban" ozeki at July's Nagoya meet, where he will need a winning record to stay on at the second-highest rank. 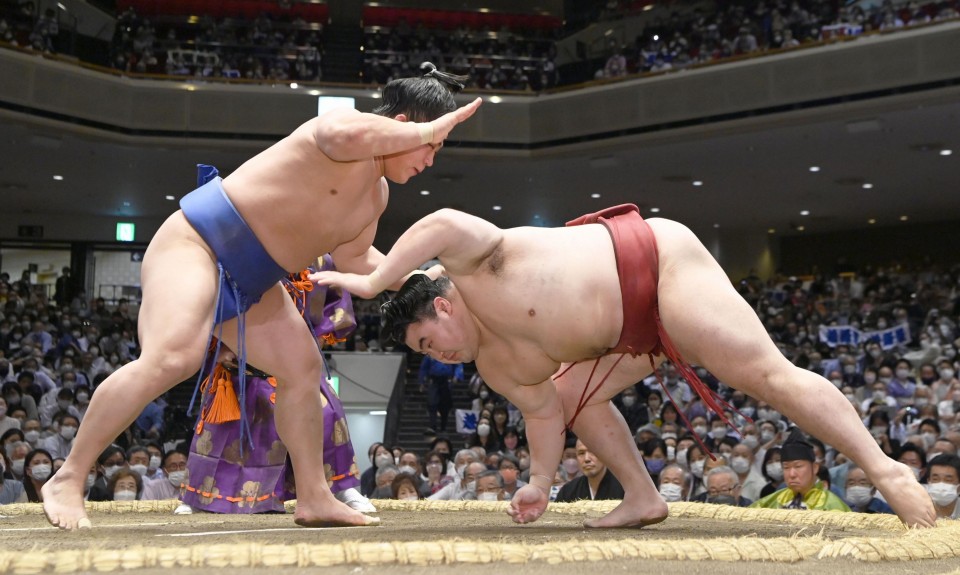 Wakatakakage (L) defeats Takanosho on the 13th day of the Summer Grand Sumo Tournament on May 20, 2022, at Tokyo's Ryogoku Kokugikan. (Kyodo) ==Kyodo