Okinawa Gov. Denny Tamaki held talks Tuesday with Prime Minister Fumio Kishida, urging him to scrap a controversial plan to relocate a U.S. air base within the southern prefecture, days ahead of the 50th anniversary of its reversion to Japan.

The governor handed Kishida a set of proposals at the prime minister's office, which also said a decades-old pact defining the rights of U.S. forces and their personnel in Japan should be reviewed. 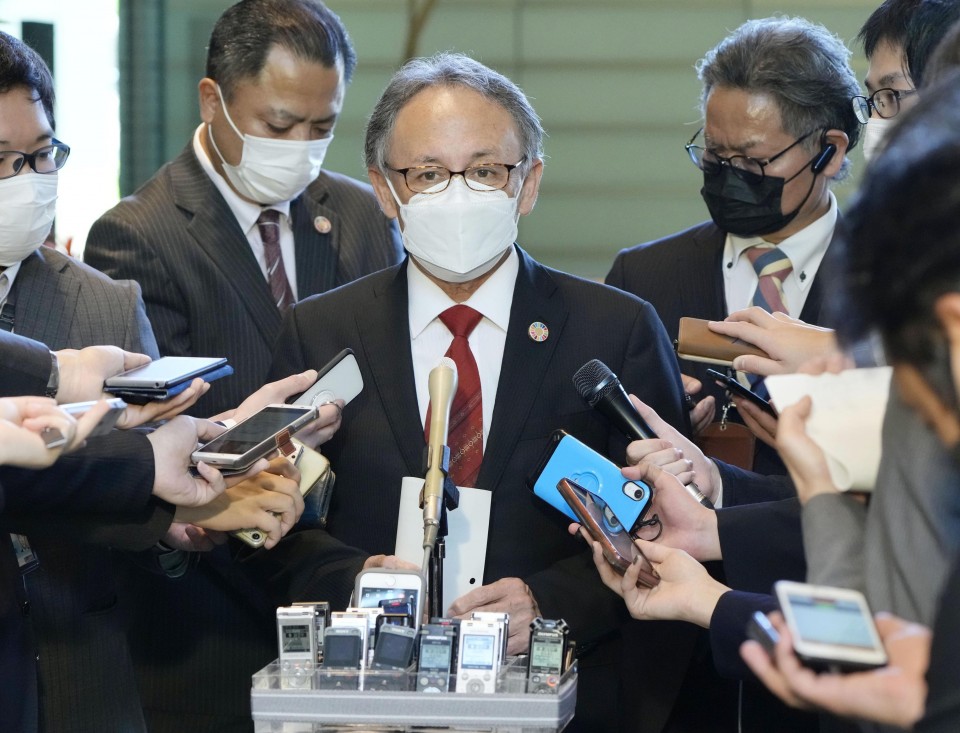 Ahead of the anniversary on Sunday, Tamaki traveled to Tokyo and asked the central government to "explore ways to solve the problem through dialogue," he told reporters following their meeting.

He quoted Kishida as saying the government will continue to make efforts to alleviate Okinawa's burden of hosting U.S. military bases while promising to "take the feelings (of local people) seriously and read the proposals."

Kishida also said he will "make efforts" to improve Okinawa's per-capita average income, which remains at about 70 percent of the national average, according to the governor.

But their meeting only lasted about 15 minutes, signaling the central government's unenthusiastic response to Tamaki, known as a staunch opponent of the relocation plan.

Chief Cabinet Secretary Hirokazu Matsuno, who attended the undisclosed meeting, reaffirmed during a regular press conference Tuesday that the existing plan is "the only solution."

The Japanese and U.S. governments have agreed to move U.S. Marine Corps Air Station Futenma from a crowded residential area of Ginowan to the less populated coastal zone of Henoko, both on Okinawa Island.

But the long-stalled plan has met strong opposition from a majority of Okinawa residents who want the base to be moved outside the prefecture, which already hosts the bulk of U.S. military facilities in Japan.

In a prefectural referendum in 2019, more than 70 percent of voters rejected the plan, with some of them also concerned about the impact of land reclamation work for the relocation on the environment off Henoko, abound by marine life, although the result was not binding on the central government.

The relocation idea dates back to a 1996 Japan-U.S. deal on the return of the land used by the Futenma base, which was struck amid public outrage over the 1995 gang rape of a 12-year-old schoolgirl in Okinawa by three U.S. servicemen.

According to the prefectural government, Okinawa hosts 70.3 percent of the land occupied by U.S. military bases in Japan, up from 58.8 percent in 1972 when it was returned to Japan from U.S. control.

The updated proposals released Saturday by the prefectural government also called for a drastic review of the Japan-U.S. Status of Forces Agreement.

Many residents regard the 1960 agreement as overly protective of U.S. service members and civilian base workers if they are implicated in illegal activities, in face of their repeated crimes and accidents.

The new documents were drawn up based on the proposals compiled by the Ryukyu government in 1971 that called for creating a peaceful island without military bases.

Tamaki also handed the proposals to the chairs of the upper and lower houses of Japan's parliament as well as to the U.S. Embassy in Tokyo.