Yokozuna Terunofuji suffered his third defeat as five maegashira wrestlers tied for the Summer Grand Sumo Tournament lead at 6-2 on Sunday after eight days of action.

No. 4 maegashira Takanosho joined the leaders as the former sekiwake claimed his first career "kimboshi" win by a rank-and-filer against a grand champion. 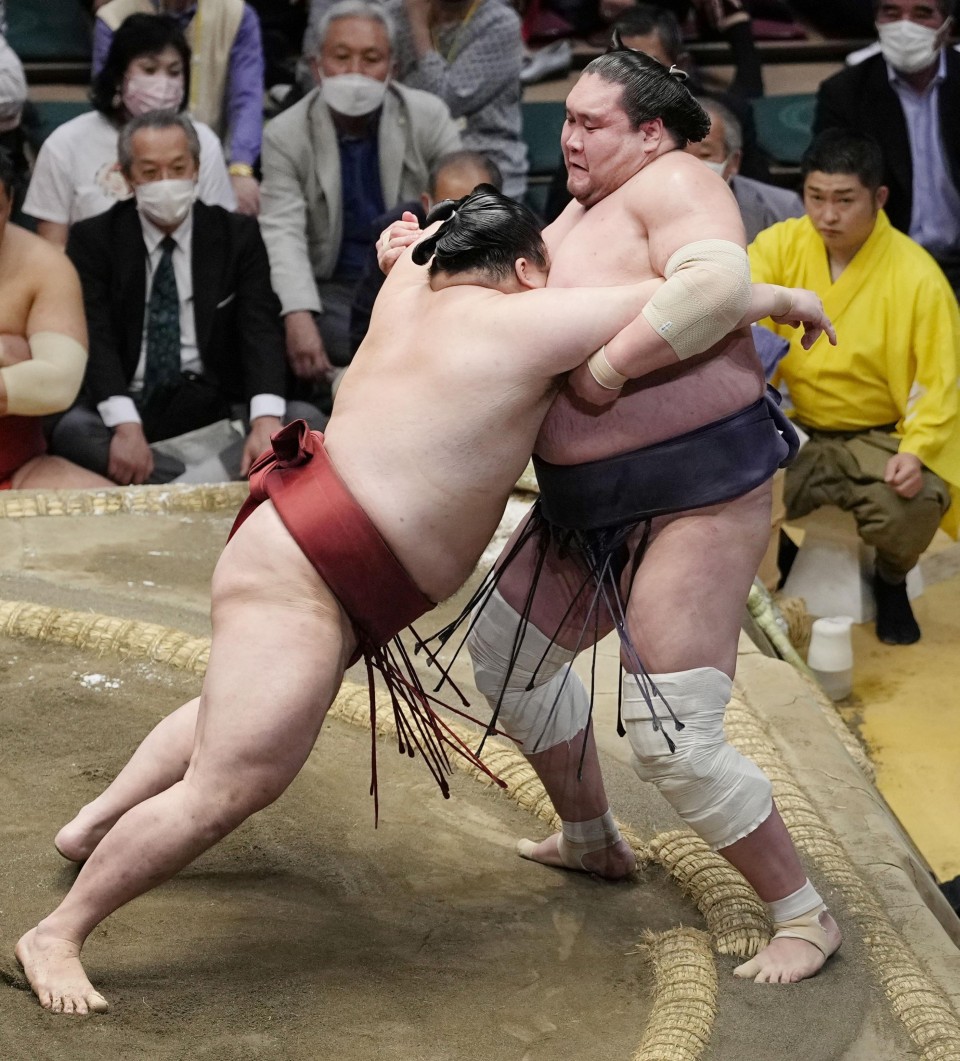 Terunofuji (R) loses to Takanosho on the eighth day of the Summer Grand Sumo Tournament on May 15, 2022, at Tokyo's Ryogoku Kokugikan. (Kyodo)

The yokozuna, who pulled out of March's Spring tourney with knee and heel injuries, has often looked less than match fit in his comeback, and was stunned by Takanosho's sharp opening drive.

Terunofuji was forced to the edge in seconds and his left foot had already landed outside the straw bales as he desperately looked to counter Takanosho at Ryogoku Kokugikan.

"I'm really happy. I just tried to give all I have and move forward against a stronger opponent," said Takanosho. "I could straighten up his upper body and get inside. I wanted to finish things in flash as I knew I'd feel his weight if I stopped."

The two maegashira wrestlers who entered the day with 6-1 records both lost, throwing the title race into chaos.

No. 11 Aoiyama (6-2) lost his lead at the top with his second straight defeat, the former sekiwake having no answer to a countercharge from No. 6 Wakamotoharu (5-3).

The Bulgarian Aoiyama had the early momentum with an attack to the throat, but Wakamotoharu stood firm and quickly regained control by reeling off some smooth shoves to push him out.

No. 12 Sadanoumi (6-2) fell at the hand of another in-form wrestler, No. 15 Ichiyamamoto (6-2), despite the 35-year-old veteran putting himself in a more than promising position.

As he backpedaled, Sadanoumi managed to swing Ichiyamamoto by his right arm near the edge. With his rival facing sideways, Sadanoumi rushed for a decisive push, but lacking balance himself, he missed the target and virtually threw himself to the sandy surface.

Veteran No. 3 Tamawashi (6-2) fended off tricky Tobizaru (5-3) after navigating an opening foray from the No. 5 maegashira to claim a push-out win.

Ozeki Takakeisho (5-3) won a battle of pusher-and-thrusters against Dieisho (5-3). The ozeki displayed more power off the start to force the komusubi to the edge before he retreated and slapped down his pursuer.

Shodai made a determined start to the bout as he forced his smaller rival onto his back foot, charging forward to wrap up a deserved win until the nephew of former Mongolian grand champion Asashoryu made a last-ditch dodging move.

A video replay showed Shodai was the first to land over the straw bales, but there was no call from the ringside judges to discuss the decision, leaving Shodai the winner.

Ozeki Mitakeumi improved to 4-4, attacking head-on before slapping down No. 1 Endo (3-5), whose attempt at a low attack left him vulnerable.

Spring meet champion Wakatakakage (3-5) succumbed to No. 2 Kotonowaka (4-4), who ended his four-bout losing run by throwing the sekiwake to win their evenly-matched encounter.

Sekiwake Abi (5-3) overpowered No. 1 Takayasu (2-6), a former ozeki, with incessant shoves to the chest and throat to win by a push-out.