A manga adaptation of a Nobel winner's book on the experiences of women who served in the Soviet Union's campaign against Germany in World War II is proving a timely success among Japanese readers looking to better understand war amid the Russian invasion of Ukraine.

The comic series is based on and shares its name with the Japanese title for Nobel Prize in literature winner Svetlana Alexievich's 1985 nonfiction book "The Unwomanly Face of War." She interviewed over 500 women to tell their frontline stories, and the manga carefully recounts them to challenge perceptions of war. 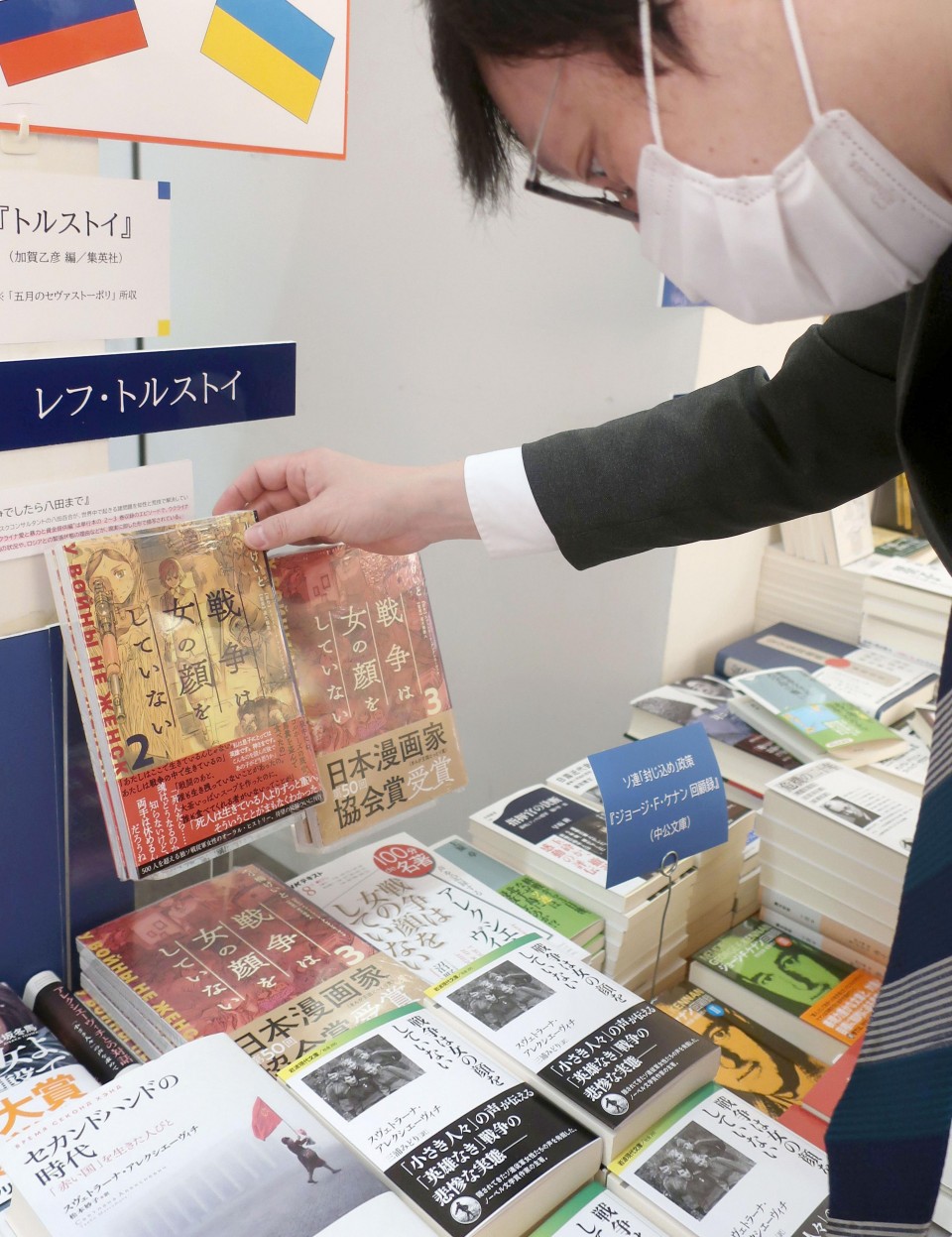 Copies of the manga adaptation of Nobel laureate Svetlana Alexievich's 1985 nonfiction book "The Unwomanly Face of War" are lined up for display at the Maruzen bookstore chain's flagship Marunouchi store in Tokyo on April 19, 2022. (Kyodo)

Many stories have been told in Japan of women's home front experiences, but the book renders in careful, panel-by-panel detail the lives of women on the front line to provide a multifaceted sense of war's reality.

"The oral histories from women who went to war compiled in the original book are full of unknown facts that shake Japanese perceptions of conflict," says Kentaro Ogino, who heads the production of the manga with the Japanese-translated title, "Senso wa onnna no kao wo shiteinai."

Its art is by Keito Koume, and Rasenjin Hayami supervises the series. Three volumes have been released since 2020, with it so far selling a combined 400,000 copies across print and digital formats, according to its publisher, Kadokawa Corp.

Its healthy sales have risen sharply with the Russian invasion of Ukraine, and the company has heard from readers expressing how it shows that humanity is essentially unchanged from the time of the Soviet Union's campaign and the current war in Ukraine, and that "it is a work to be read now."

The women the manga portrays have a kind of wide-eyed innocence, which makes the cruelty of the battlefield where people's humanity is lost even more pronounced to the reader.

Among its stories are a group of women assigned to a unit doing laundry who lose their fingernails to the soap used, while in another, a sniper recalls, "In war, everything is completely black. Blood is the only other color."

Kengo Tomoda, deputy manager of the Maruzen bookstore chain's flagship Marunouchi shop, expressed hope that it would inspire further reading, saying, "While the art style appeals to Japanese readers, the content portrays the harshness of war. I hope those who read the comic seek out the original book and dig deeper into the subject."

The comic also acquires new readership atypically, Ogino said. "Normally, a manga spreads through friends or other horizontal connections, but this series has more vertical recommendation paths, like parents to children, or children to parents or grandparents. It offers many opportunities to discuss war."

Ogino also mentioned the interest fostered by the war in Ukraine, saying, "The book was created to get a sense of war in peacetime when the concept is hard to grasp. It is sad it is getting attention the way it is now. We can't change the past, but we can act in the present. I hope the manga brings as many readers as possible to that conclusion."

Svetlana Alexievich is a journalist and writer born in the Soviet Union in Ukraine in 1948 to a Belarusian father and Ukrainian mother.

Apart from her 1985 debut "The Unwomanly Face of War," her other famous works include "Chernobyl Prayer," in which she spoke to residents, people involved in the cleanup and others to communicate the 1986 nuclear disaster's effects. She was awarded the Nobel Prize for literature in 2015.