Samurai Blue duo Daizen Maeda and Kyogo Furuhashi found the net for Celtic in a 4-1 win over Hearts on Saturday that all but guaranteed the Scottish Premiership title for the Glasgow club.

With two rounds left, Ange Postecoglou's men are nine points and 22 goals ahead of bitter cross-city rivals Rangers, who have a game in hand.

Hearts forward Ellis Simms scored after just three minutes at Celtic Park, but the visitors had little else to cheer in a one-sided affair.

Maeda leveled in the 30th minute, tapping in from Jota's cross on a lightning counterattack. 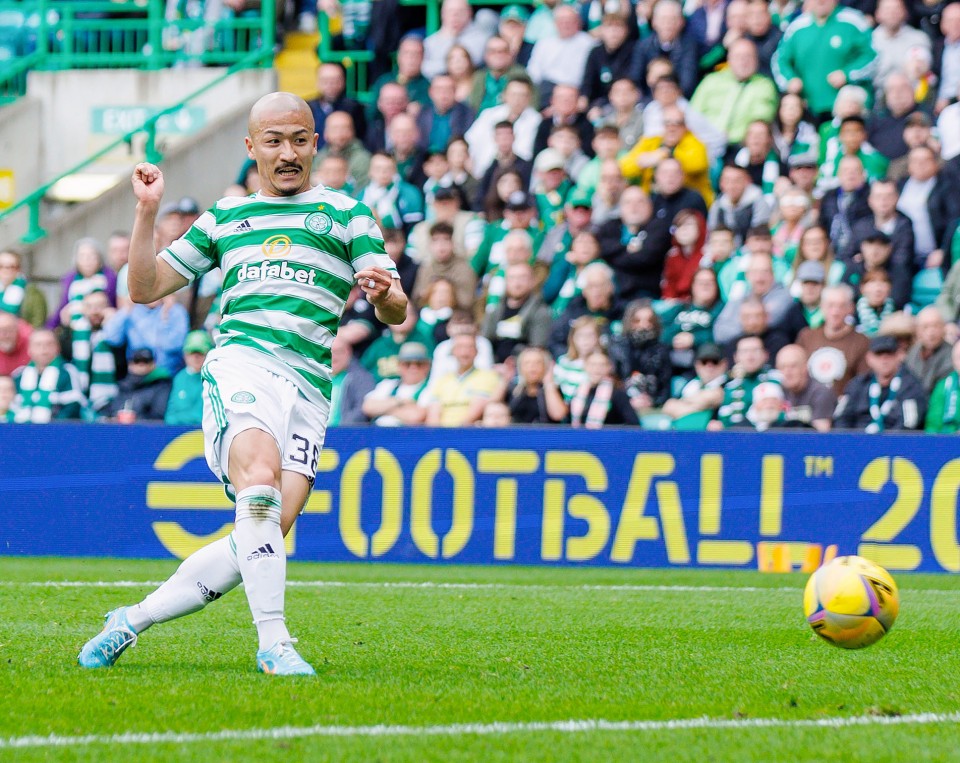 Daizen Maeda equalizes for Scottish Premiership leaders Celtic during their 4-1 win over Hearts in Glasgow, Scotland on May 7, 2022. (For editorial use only)(Kyodo)

Furuhashi gave Celtic the lead seven minutes later with a close-range header that floated across the goal line before Hearts keeper Craig Gordon could bat it away. 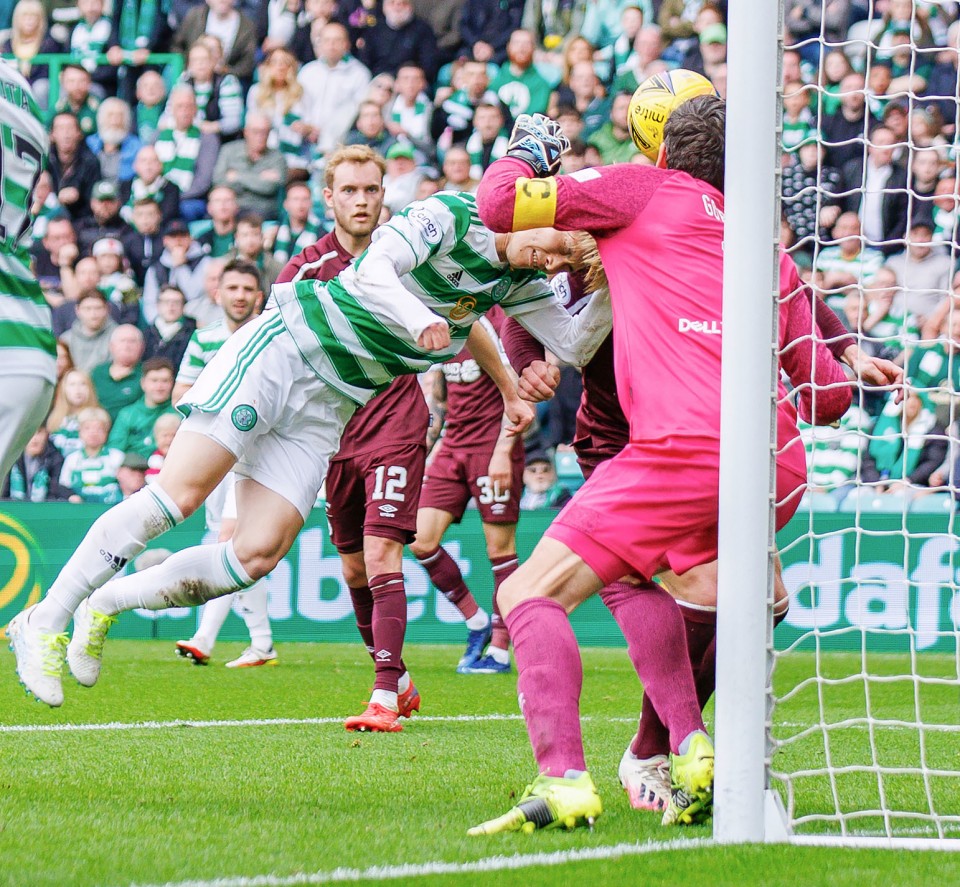 Kyogo Furuhashi (front L)  scores with a header for Scottish Premiership leaders Celtic during their 4-1 win over Hearts in Glasgow, Scotland on May 7, 2022. (For editorial use only)(Kyodo)

Matt O'Riley added a third for Celtic in the 69th minute.

Japan midfielder Reo Hatate entered the game midway through the second half and had an attempt saved moments before fellow substitute Giorgos Giakoumakis completed the rout with his 90th-minute goal.

"I thought (the team) were outstanding," former Yokohama F Marinos boss Postecoglou said. "When we've needed someone, they've stepped up and it's a different person wearing the cape every time." 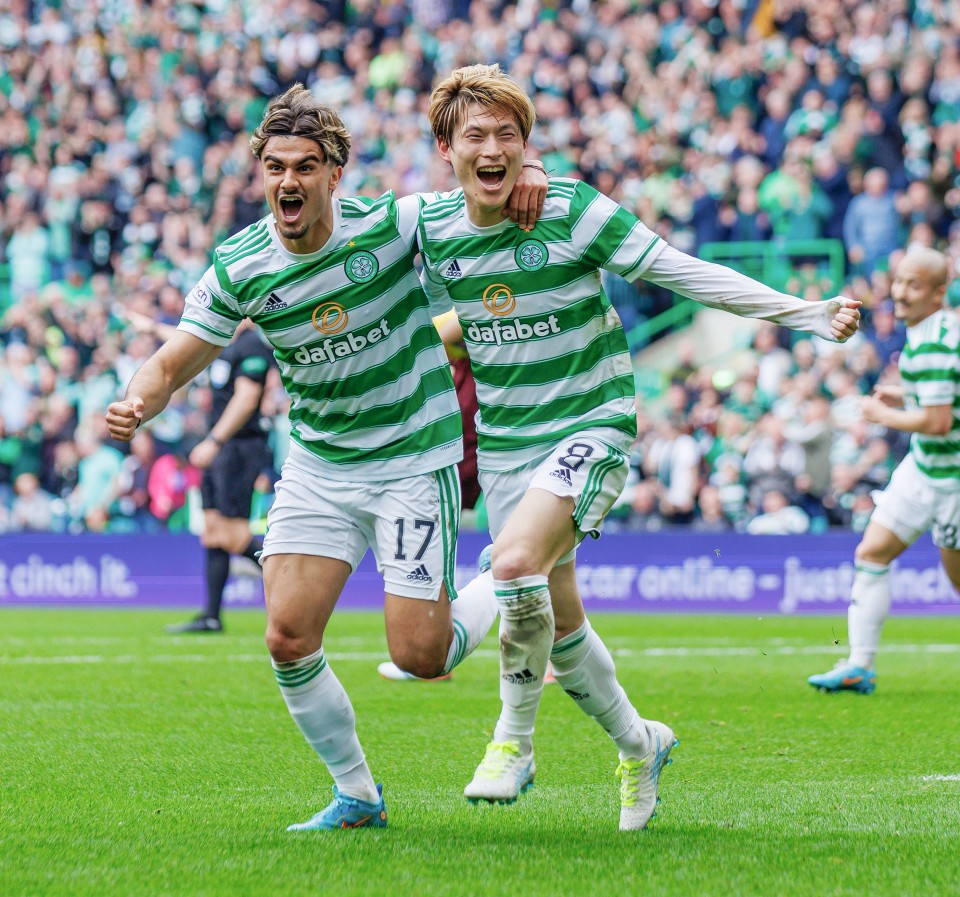 Kyogo Furuhashi (R) celebrates with teammate Jota after scoring for Scottish Premiership leaders Celtic during their 4-1 win over Hearts in Glasgow, Scotland on May 7, 2022. (For editorial use only)(Kyodo)

Celtic could be crowned champions as early as Sunday, should Rangers fail to win their match at home to Dundee United.

Elsewhere in Europe, Takefusa Kubo made his first start in two games for relegation-threatened Mallorca, who suffered a 6-2 loss in a crucial battle with fellow Spanish top-flight stragglers Granada.

Kubo created a number of early chances but overall struggled to make an impact for Mallorca, who went into the break tied 1-1 before collapsing in the second half.

In the German second division, Samurai Blue defender Ko Itakura played the full 90 minutes for Schalke as they secured promotion back to the Bundesliga with a 3-2 win over St. Pauli.

In the Austrian top flight, Keito Nakamura scored a pair of early goals for LASK, who drew 3-3 at home with Hartberg.