China has failed to persuade Pacific island countries to sign an agreement covering a wide spectrum of issues from trade, security and police cooperation to fisheries, Australian media reported Monday, while Beijing has been stepping up efforts to boost its influence in the region.

Foreign ministers from China and 10 Pacific island nations, including Papua New Guinea, Tonga and Samoa, held a meeting in Fiji on the same day, but they did not sign such a far-reaching deal as some countries expressed concern about the move, according to the Australian Broadcasting Corp. 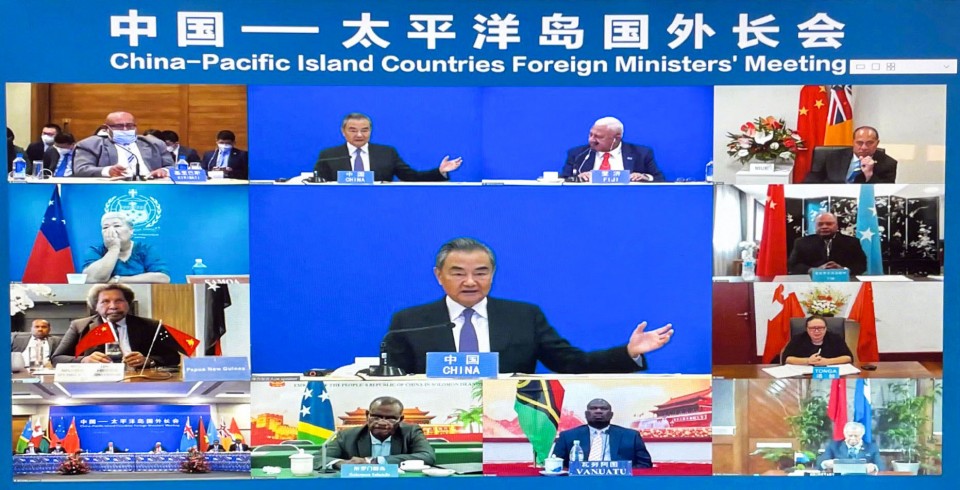 Fijian Prime Minister Frank Bainimarama said in a press conference that the island countries prioritize "consensus" for any regional agreement, the ABC said, suggesting that there was opposition to some of China's proposals amid intensifying geopolitical rivalry between Beijing and Washington in the Pacific.

Micronesia's President David Panuelo is quoted as saying that signing the multilateral pact between China and Pacific island nations could trigger "a new Cold War." Micronesia has diplomatic relations with China, but it has depended on the United States for security.

China, however, is expected to continue talking with the 10 countries in an attempt to bolster security ties, as its tensions with the so-called Quad, comprising the United States, Japan, India and Australia, have grown.

Chinese President Xi Jinping was quoted by the official Xinhua News Agency as saying in a written speech to Monday's foreign ministerial gathering that China is ready to "build an even closer China-Pacific island countries community with a shared future."

"No matter how the international landscape may evolve, China will always be a good friend that shares the same ideal and follows the same path" and "a good brother going through thick and thin" with the Pacific island nations, Xi said.

In April, China and the Solomon Islands signed a security pact, which would reportedly allow the deployment of Chinese police, military and other armed personnel, as well as the docking of the Asian country's ships in the islands.

The administration of U.S. President Joe Biden has warned the Solomon Islands against any possible moves toward inviting a Chinese military presence, while Australia attempted to prevent the island nation from formally signing the agreement with Beijing.

Biden and Japanese Prime Minister Fumio Kishida said in a statement released following their meeting last week in Tokyo that the pact between China and the Solomon Islands "was concluded in a nontransparent manner without addressing regional voices of concern."

Chinese Foreign Minister Wang Yi is on an eight-country tour of the Pacific islands from last Thursday through Saturday.