Nearly 1,000 people on Tuesday protested against the landslide victory of Ferdinand Marcos Jr., the son and namesake of the late Philippine dictator, in the country's presidential election held the previous day.

Monday's election drew "attention to the kind of politics that is so rotten, so backward, that it would allow heirs of a dictator (to get elected)," Renato Reyes of the left-leaning group Bayan (Nation) told Kyodo News after joining the pro-democracy protests in front of the office of the Commission on Elections. 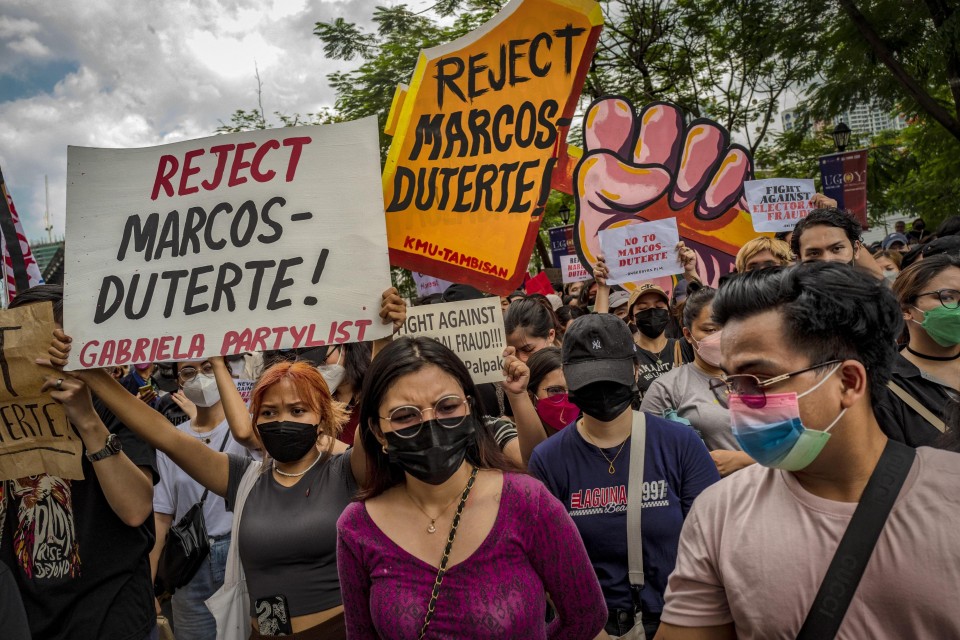 Filipinos take part in a protest against election results outside the Commission on Elections building on May 10, 2022, in Manila. (Getty/Kyodo)

Marcos Jr., the 64-year-old former senator, won 30.9 million votes in the race against opposition and democracy icon Vice President Leni Robredo, 57, who garnered 14.7 million votes with 97.8 percent of the ballots counted, according to election returns.

Reyes said they "denounce" Marcos Jr. as well as Philippine President Rodrigo Duterte for having "benefited from massive disinformation" on social media.

Political analysts often liken the campaign of Marcos Jr. to that of Duterte, who won the 2016 election aided by online trolls and bloggers. Duterte will exit the presidency on June 30 after completing the single six-year granted to presidents under the country's Constitution.

The Congress is set to officially proclaim Marcos and Duterte-Carpio in late May as the winners of the presidential and vice presidential races.

Also on Tuesday, the Commission on Elections dismissed petitions to disqualify Marcos Jr. over his unpaid taxes when he served as governor of Ilocos Norte province after his family's return to the Philippines from a five-year exile.

Marcos, popularly known as "Bongbong," is being accused of spreading fake news to revise the history of his father's 21-year rule fraught with human rights violations and embezzlement of public funds.

In 1986, the pro-democracy "people power" revolution toppled the dictatorship of Marcos senior and sent his family into exile. He died in 1989, and the remaining members of his family were eventually allowed to return to the Philippines.

The Marcoses and the Dutertes formed an alliance, campaigning on a ticket to continue Duterte's policies, such as his "war on drugs," which has killed thousands of civilians, and maintaining friendly relations with China.

In an address short of an official victory speech hours after voting ended, Marcos Jr. thanked voters and asked them to keep their trust in him for a "bright future ahead."

Robredo, meanwhile, sought to reassure her dismayed supporters while taking note of reports of technical glitches and vote-buying incidents during the election.

"Although some votes have yet to be cast, although we still have questions that need to be addressed, the people have spoken, and it is becoming clearer and clearer," said the human rights lawyer.

She added, "In the name of the Philippines, which I know you deeply love, we have to listen to it because, in the end, we only have one and the same nation to share."