As for regional issues, the ministers affirmed the importance of strengthening trilateral cooperation involving the United States to deal with North Korea's nuclear and missile threats as they met in Seoul on the eve of South Korean President-elect Yoon Suk Yeol's inauguration, according to the Japanese Foreign Ministry.

Hayashi and Park "shared a view that bilateral and trilateral strategic collaboration also involving the United States is needed more than ever in the current international situation where the rules-based international order is being threatened, and they have no time to spare in improving Japan-South Korea relations," the ministry said in a statement. 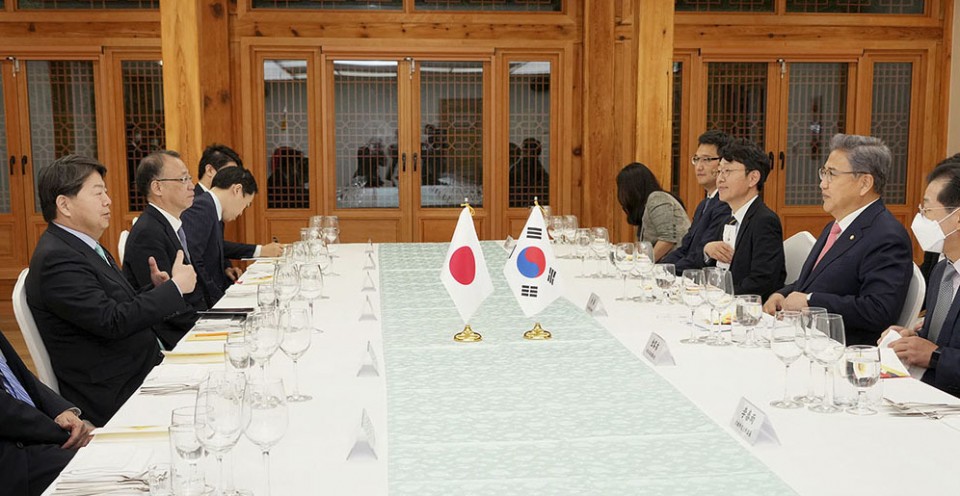 During the meeting that lasted about two hours, they agreed that the two nations "should not stand by and let Japan-South Korea relations deteriorate any further," it said.

Hayashi strongly condemned Russia for its aggression on Ukraine, saying it rocks the foundation of the international order and affects not only Europe but also Asia, according to the ministry.

Hayashi will attend Yoon's inauguration ceremony as a special envoy of Prime Minister Fumio Kishida and hand Yoon a letter from the premier when he later meets with the new president.

Before leaving for South Korea, Hayashi told reporters he would make the two-day trip "an important opportunity to closely communicate" with the new administration to bring bilateral ties back to a "sound footing."

His visit marked the first by a Japanese foreign minister to South Korea since June 2018.

Earlier Monday, Kishida said, "Difficult issues remain between the two countries, but they cannot be left as they are."

Tokyo maintains that wartime issues have been resolved and that Seoul should follow through on agreements aimed at resolving disputes, such as a 2015 deal that settled the issue of "comfort women" procured for Japan's wartime military brothels.

Eight members of a cross-party group of Japanese lawmakers dedicated to promoting legislative exchanges between the two neighbors will also attend the inauguration ceremony, according to Fukushiro Nukaga, a former finance minister.

Nukaga, a Liberal Democratic Party lawmaker who heads the group, told reporters in Tokyo that he will have talks with Yoon on Wednesday.

Expectations have grown for an improvement in Tokyo-Seoul ties since Yoon won a tight presidential election in March. The conservative main opposition candidate called for a "future-oriented" approach to the bilateral relationship during the campaign.

Relations became strained under the current administration of President Moon Jae In over issues originating from Japan's 1910-1945 colonial rule of the Korean Peninsula.

The disputes between the two nations also include the issue of compensation demands from South Korean plaintiffs over what they say was wartime forced labor.

In addition, the two sides have been at loggerheads over islets in the Sea of Japan controlled by Seoul and claimed by Tokyo, known as Takeshima in Japan and Dokdo in South Korea, as well as Japan's tighter control of semiconductor material exports to South Korea introduced in July 2019.

The inauguration also comes as the United States is seeking to boost its trilateral security cooperation with Japan and South Korea following the renewed North Korean missile and nuclear threat, as well as Russia's invasion of Ukraine.

Last month, the incoming South Korean foreign minister headed a delegation to the United States dispatched by Yoon for policy consultations. Well-informed on U.S. affairs, he, like Hayashi, studied at Harvard University. Park also studied at the University of Tokyo.