Sole yokozuna Terunofuji made a sputtering start to his injury comeback Sunday at the 15-day Summer Grand Sumo Tournament, suffering an upset loss against komusubi Daieisho.

Having missed most of the March grand tournament with right heel and left knee injuries, Terunofuji lost for the second straight meet against Daieisho, who went to his trademark pushing and thrusting attack in the day's final bout at Ryogoku Kokugikan. 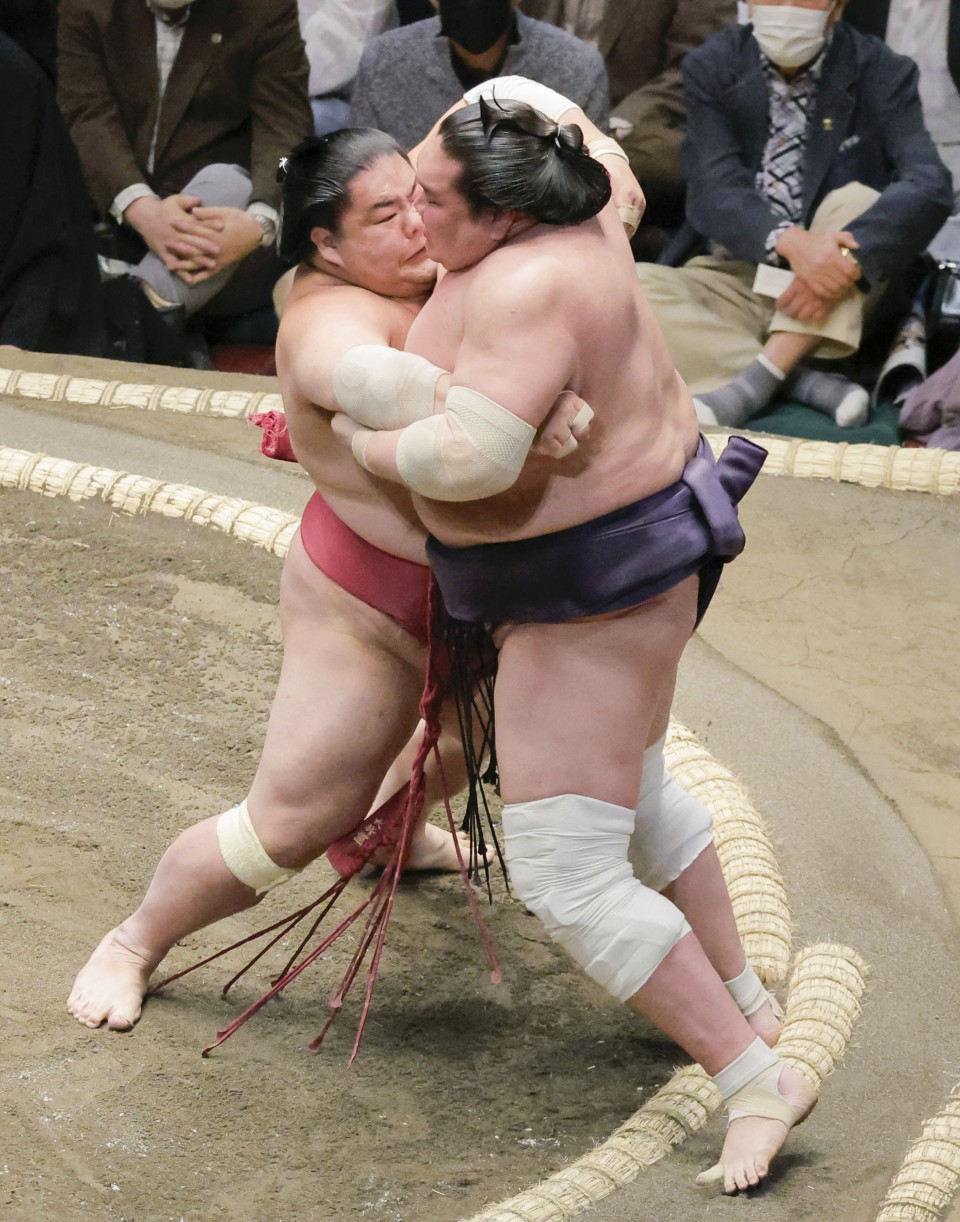 Daieisho (L) defeats Terunofuji on the opening day of the Summer Grand Sumo Tournament at Tokyo's Ryogoku Kokugikan on May 8, 2002 (Kyodo)

The komusubi was strong off the mark and had all the momentum as he pushed out the six-time Emperor's Cup winner, who faces questions about his health after showing little resistance.

"I needed to go forward and do my style of sumo," Daieisho said. "I've been working on my thrusting attack and pushing attack and improved my skills."

In an opening day of upsets, Mitakeumi was the only winner among the three ozeki, with both Takakeisho and Shodai falling to lower-ranked opponents.

Winner of the January tournament, Mitakeumi pushed out former ozeki Takayasu, fighting as a No. 1 maegashira following a strong run of results.

Takayasu made a promising start with an inside grip, but Mitakeumi countered from the outside before maneuvering the maegashira over to the edge and out.

No. 2 Kotonowaka continued to polish his impressive credentials by pushing out Takakeisho.

The powerfully built 24-year-old sidestepped Takakeisho's charge and slapped his face before shoving him over the straw.

"I just wanted to keep constant pressure on the ozeki with my pushing attack going forward. But I still need to keep improving," said Kotonowaka, who had never previously beaten Takakeisho.

Shodai, who opened the March tournament as a demotion-threatened "kadoban" ozeki, made another lackluster start, losing to No. 1 Kiribayama by force out.

"I just wanted to go forward, and gave everything I had," said former komusubi Kiribayama, who is eyeing a return to the three "sanyaku" ranks below yokozuna. "I still have a long way to go," he said.

Sekiwake Wakatakakage, winner of the March championship in his debut at the third-highest rank, looked strong as he forced out No. 3 maegashira Hokutofuji.

The ascendant star held his ground after Hokutofuji drove forward from the jump, then patiently waited for an opening to wrench the former komusubi off balance and bundle him out.

Sekiwake Abi suffered an upset loss against Mongolian No. 4 Tamawashi, who thrust out his more-fancied opponent.

Mongolian komusubi Hoshoryu was unable to make a winning start to his second tournament at sanyaku, losing by thrust down to No. 4 Endo.