European Council President Charles Michel condemned Russia on Friday for threatening to use nuclear weapons following its invasion of Ukraine, saying during his Hiroshima visit it is a "shameful and unacceptable" threat to global security.

In one of the two Japanese cities devastated by the 1945 U.S. atomic bombings at the end of World War II, Michel said he feels "seized by an intense determination" to eliminate nuclear weapons after visiting the Hiroshima Peace Memorial Museum. 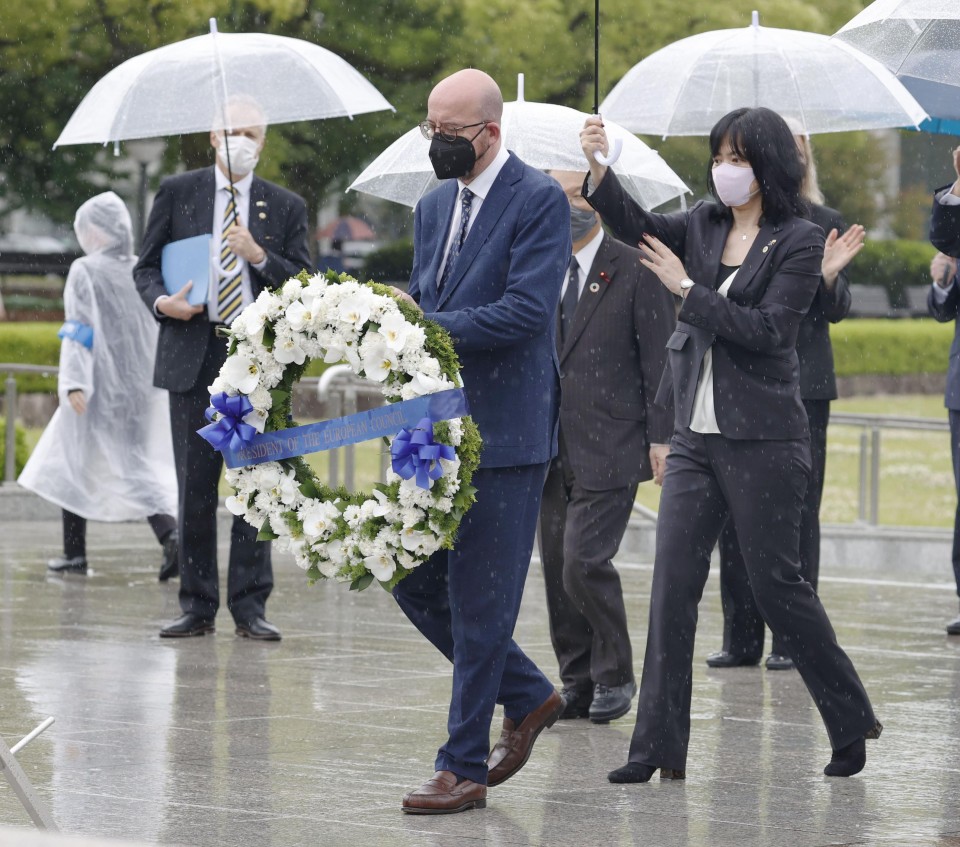 In a speech following his 35-minute tour of the museum on the history and aftermath of the bombing, Michel said Hiroshima is a "stark reminder of the urgency" to rid the world of nuclear arms, and that the suffering there and in Nagasaki was "haunting even today."

Michel made his trip to Hiroshima to highlight EU opposition to the use of nuclear arms amid tensions heightened by threats including Russia's invasion of Ukraine and North Korean ballistic missile tests.

The European Council president laid flowers at the cenotaph for victims of the bombing on Aug. 6, 1945, and met with Hiroshima Mayor Kazumi Matsui as well as atomic bomb survivors.

Michel and European Commission President Ursula von der Leyen held talks with Prime Minister Fumio Kishida in Tokyo on Thursday. Japan and the EU have summits at least once a year.

The EU leaders and Kishida said in a joint statement released after the talks, "We remain committed to the ultimate goal of realizing a world without nuclear weapons, regardless of the current severe international situation."

A senior EU official said Michel decided to go to Hiroshima because the city is a symbol for areas affected by nuclear weapons and also where Kishida is elected from.

A-bomb survivor and Hiroshima resident Hiroshi Shimizu, 79, expressed hope that Michel's visit will contribute to ending the Russian invasion by raising awareness about the destructive potential of nuclear weapons.

But Shimizu was less convinced by the effect of foreign dignitaries' visits alone.

"The world won't change just by having important people here. It's important they embed what they have learned into their own countries, and that the people raise their voices against war," he said.