The Mongolian-born grand champion improved to 6-3 by forcing out No. 5 maegashira Tobizaru (5-4) in the final bout of Day 9 at Ryogoku Kokugikan, using brute strength to pick up and deposit his opponent over the edge. 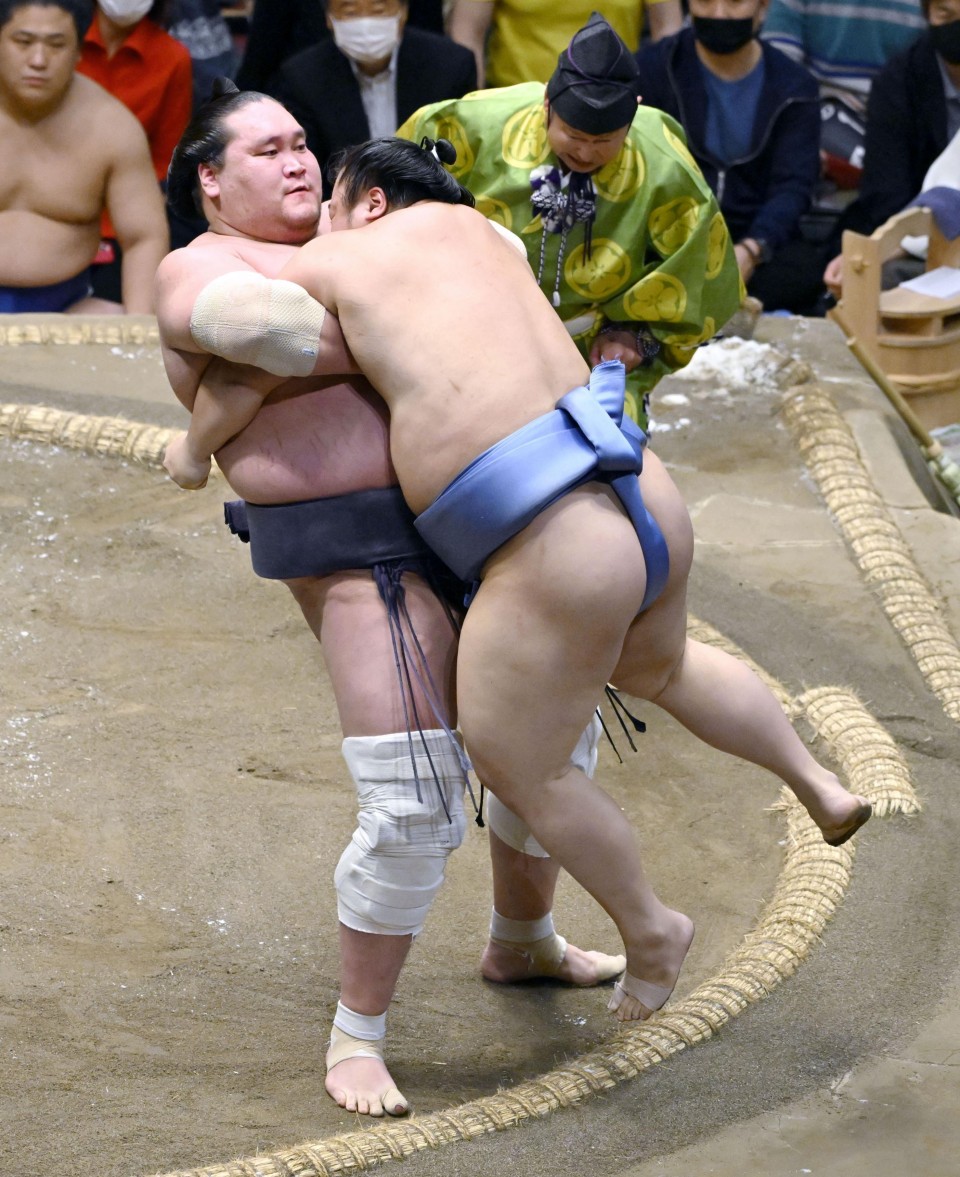 Terunofuji (L) defeats Tobizaru on the ninth day of the Summer Grand Sumo Tournament on May 16, 2022, at Tokyo's Ryogoku Kokugikan. (Kyodo)

A day after taking his third loss of the 15-day meet against No. 4 Takanosho, Terunofuji patiently waited until Tobizaru's opening attack lost steam, then hoisted the maegashira to the other side of the rope with an arm barring force out.

Returning from knee and ankle injuries that prompted his early withdrawal from the March tourney, Terunofuji has so far only shown glimpses of the dominant wrestler who has collected five Emperor's Cups since July 2020.

He remains one win back from Takanosho and three other rank-and-filers -- No. 11 Aoiyama, No. 12 Sadanoumi and No. 15 Ichiyamamoto -- who are tied for the lead at 7-2.

Former sekiwake Takanosho strengthened his bid for a return to the three elite "sanyaku" ranks below yokozuna by blowing away ozeki Mitakeumi (4-5). The No. 4 won the opening clash and gave no ground on his way to a quick force out.

"I'm in a good spot right now mentally," said Takanosho. "Even though I'm at 7-2, I still haven't gotten a winning record, so that's my next goal."

Four other wrestlers share the second rung of the leaderboard at 6-3. They include komusubi Hoshoryu, No. 2 Kiribayama, and No. 3 Tamawashi, who dropped from the leading pack with a loss to No. 4 Endo (4-5).

Rising star Hoshoryu exhibited his outstanding grappling technique with a takedown of No. 1 Takayasu.

The 22-year-old nephew of Mongolian great Asashoryu allowed former ozeki Takayasu (2-7) to charge forward from the jump, luring him into an arm-bar throw.

Former komusubi Kiribayama pushed out one of the current holders of the rank, Daieisho (5-4), who has beaten several higher-ranked opponents here, including Terunofuji.

The champion of the March tournament, sekiwake Wakatakakage, improved to 4-5 by slapping down ozeki Takakeisho (5-4).

After nearly slipping over, Wakatakakage used his quick footwork to close the gap on Takakeisho and prevent the powerful pusher thruster from going to his preferred attack. As Takakeisho tried to drive his way out of trouble, Wakatakakage seized an opening to slap the charging ozeki down.

"I'm just trying to maintain my focus despite my disappointing run," Wakatakakage said. "I'm trying to take it day by day."

Fighting to stave off a losing record, beleaguered ozeki Shodai (3-6) notched his most impressive win of the meet to date against sekiwake Abi (5-4).

The winner of a single Emperor's Cup delivered a strong opening hit and pushed his way to a convincing victory over Abi, a special prizewinner at two of the previous three tournaments.