Japanese Prime Minister Fumio Kishida and his Malaysian counterpart Ismail Sabri Yaakob on Friday affirmed opposition to infringement of any nation's sovereignty and agreed to cooperate in responding to impacts of Russia's invasion of Ukraine on the global economy and tackling humanitarian issues resulting from the crisis.

The leaders reaffirmed the importance of maintaining international order based on the rule of law, with Kishida saying he strongly opposes any unilateral attempts to change the status quo in the East and South China seas, the Japanese Foreign Ministry said, referring to military activities of an increasingly assertive China. 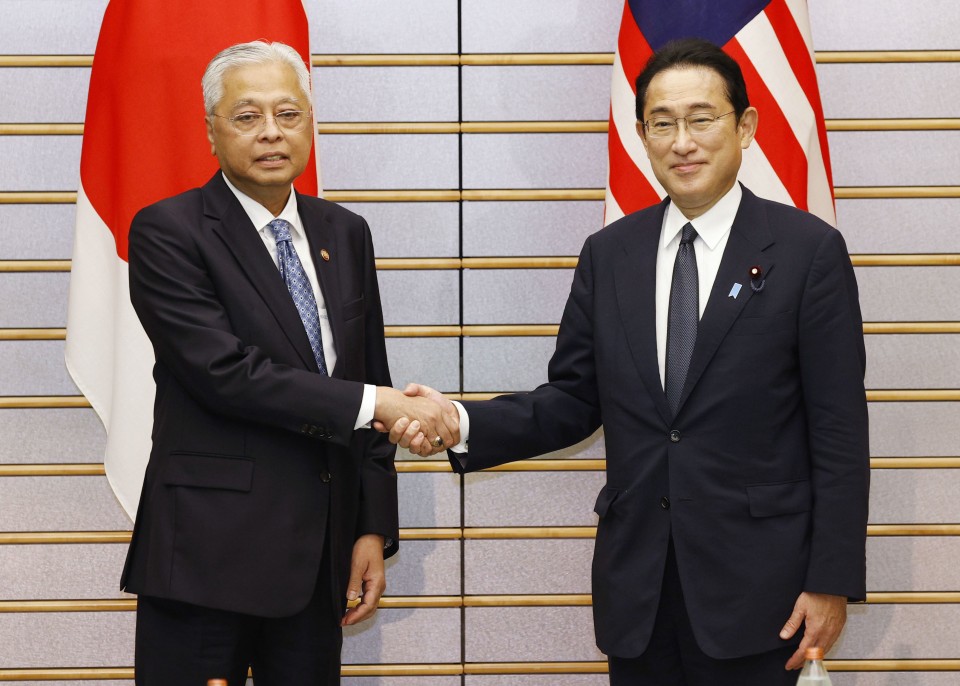 Japanese Prime Minister Fumio Kishida (R) and Malaysian Prime Minister Ismail Sabri Yaakob shake hands before the start of their meeting in Tokyo on May 27, 2022. (Kyodo)

Kishida sought Malaysia's support in realizing a free and open Indo-Pacific, a Japanese and U.S.-promoted vision for countering China's growing clout in the region.

In response, Ismail Sabri expressed hope the two countries will further strengthen their strategic partnership, according to the ministry.

Also discussed were concerns over a recent series of ballistic missile tests by North Korea, as well as renewed calls for cooperation between the two countries to reduce carbon emissions.

With this year marking the 65th anniversary of the establishment of diplomatic relations between Japan and Malaysia, the leaders agreed to strengthen bilateral ties in various areas including youth and sports exchanges and cooperation in the aviation industry, the ministry said.

Kishida in March sent former Prime Minister Shinzo Abe to Malaysia as a special envoy in commemoration of the anniversary.