A small Japanese opposition party appears to be going all out for its survival beyond a key election this summer, raising the possibility that it could become a dynamo for change in the country's political landscape.

The Democratic Party for the People's recent cozying up to Prime Minister Fumio Kishida's Liberal Democratic Party has fueled speculation among political circles that it wants to join the ruling coalition, which also involves junior partner Komeito.

For the LDP, the small opposition party may not be a strange political bedfellow, and their closer relations in the run-up to the House of Councillors election in July would help the ruling party prevent an unwanted scenario -- opposition parties joining forces to shake the LDP's hold on power. 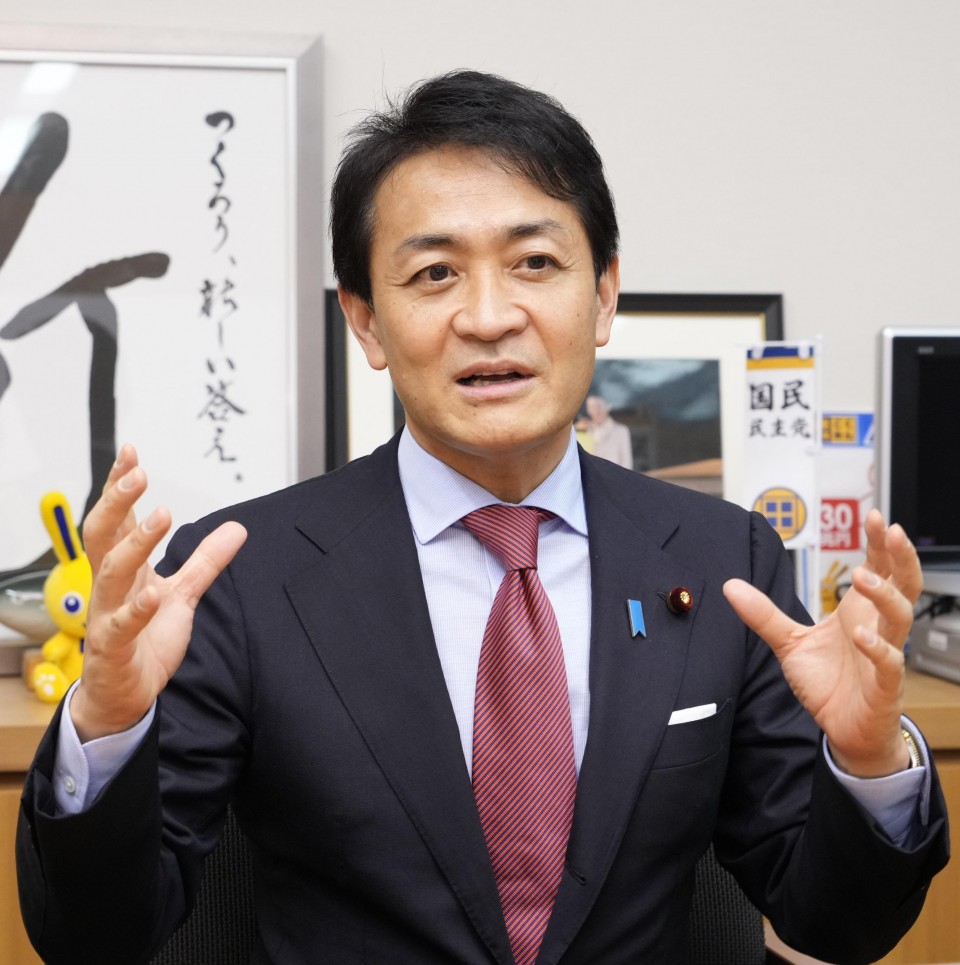 Yuichiro Tamaki, head of the opposition Democratic Party for the People, speaks during an interview in Tokyo on April 22, 2022. (Kyodo)

That speculation has already created hiccups with other opposition parties, especially the Constitutional Democratic Party of Japan, which shares the same support base -- Rengo -- the nation's largest umbrella group for labor unions.

And most recently, it has hit the Japan Innovation Party, the opposition party that scrapped an agreement with the Democratic Party for the People to seek a change of government together.

For its part, the Democratic Party for the People has kept mum about the possibility of joining the governing coalition.

"What is at stake is our survival," party leader Yuichiro Tamaki told reporters recently. "We are not in a qualified position to talk about (what would happen) beyond the election."

In a rare move for an opposition party, Tamaki's party voted for a government budget for fiscal 2022 in parliament. He said he had secured an assurance from Kishida that the party's preference for gasoline tax cuts to fight rising fuel prices would be considered, he said.

The LDP-Komeito coalition has launched consultations with the small opposition party to discuss possible gasoline tax cuts and recently kicked off a debate on bolstering support for young people who care for family members due to illness, disability or other difficult conditions.

"It has become all the more apparent that the Democratic Party for the People, with its survival at stake, wants to join the ruling coalition because it is struggling to find its distinctive place on the political spectrum," said Naoto Nonaka, a professor of comparative politics at Gakushuin University.

"It is working with the coalition under the name of policy coordination but looks as if it does not mind getting absorbed by the LDP," Nonaka said.

The recent turn of events has ramifications for other opposition parties with the upper house election only two months away. The Democratic Party for the People's strategy to seek cooperation from various sides has also led to criticism by some opposition lawmakers who see it as having "no principles."

Eyes are on Rengo, which has served as the major support base of Tamaki's party and the major opposition Constitutional Democratic Party of Japan, as it can sway election dynamics.

Under Kishida, the LDP is warming to the major labor organization, formally known as the Japanese Trade Union Confederation, with around 7 million members from nearly 50 labor unions.

"The LDP has a sense of alarm and does not want to see opposition parties joining hands to counter the ruling parties and Rengo members united heading into the upper house election," Nonaka added.

Kishida's call for aggressive wage hikes and his push for fairer wealth distribution under a new form of capitalism appear to resonate with Rengo. The policy agendas have also made the Constitutional Democratic Party of Japan's policy platform less distinctive, political analysts say.

In a display of closer relations, Kishida became the first prime minister in nine years to attend Rengo's New Year's gathering. For the group's May Day event on May 1, Hirokazu Matsuno, a close aide who serves as the top government spokesman, was dispatched on the prime minister's behalf as he was on an overseas trip.

Yu Uchiyama, a political science professor at the University of Tokyo, said it happens in Japanese politics that labor unions shift in favor of ruling parties to achieve policy goals because of a fractured opposition camp.

"A new variant is the Japan Innovation Party. I doubt Rengo, or the labor unions supporting the Democratic Party for the People, would feel comfortable seeing the two political parties together," Uchiyama said.

Though it was scrapped in the end, the agreement between the two opposition parties to work together toward a change of government raised more questions than answers for some, including the Constitutional Democratic Party of Japan.

A key factor to watch is whether parties pushing for constitutional revision can hold on to their two-thirds majority in the upper house, which is needed to initiate any changes to the supreme charter before it can be put to a national referendum.

"Much depends on the outcome of the upper house election. If the LDP cannot increase its seats, it may seek support from other parties outside the coalition. So from the left and right sides of the LDP, the Democratic Party for the People and the Japan Innovation Party are waiting for that to happen," Gakushuin's Nonaka said.

So far, Tamaki of the Democratic Party for the People has not shown his cards, emphasizing that the priority is on realizing policies for the people.

"That (cooperative) stance won't change even if our partners are the ruling parties," Tamaki told reporters. 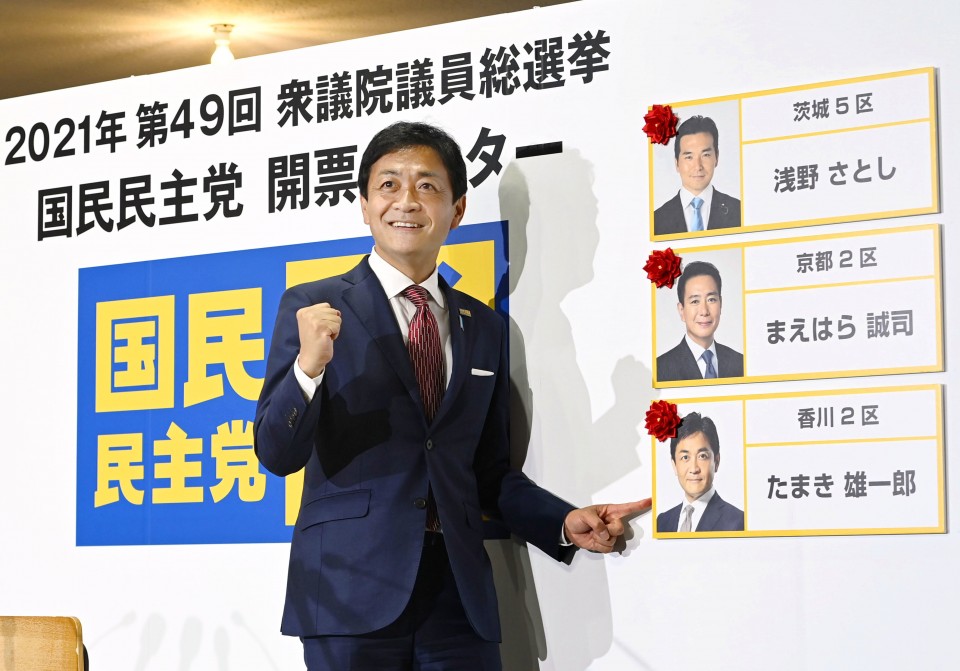 Yuichiro Tamaki, leader of the Democratic Party for the People, poses on Oct. 31, 2021, in front of pictures of candidates who won in the day's House of Representatives election at the party's headquarters in Tokyo. (Kyodo) ==Kyodo