Anthony Albanese was sworn in as Australia's new prime minister on Monday, after claiming victory for his center-left opposition Labor Party in Saturday's general election.

Albanese's swearing-in was expedited to allow him to attend a summit of the leaders of the "Quad," made up of Japan, the United States and India, in Tokyo on Tuesday.

The 59-year-old leader of the Labor Party, which returned to power for the first time in nine years, was sworn in by Australia's Governor-General David Hurley in Canberra, alongside four senior ministers. Vote counting continues to determine the final few seats in parliament. 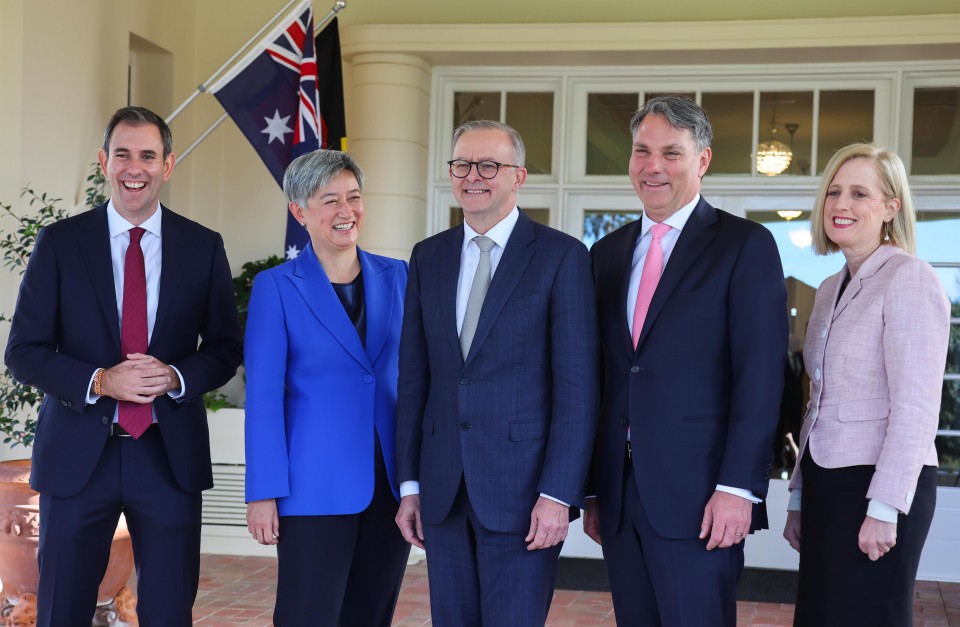 (From L) Jim Chalmers, Penny Wong, Anthony Albanese, Richard Marles and Katy Gallagher pose for a photograph outside Government House after being sworn in as treasurer, foreign minister, prime minister, deputy prime minister and minister for finance respectively on May 23, 2022, in Canberra, Australia. (Getty/Kyodo)

The ministers will cover all ministerial portfolios in an interim arrangement, Albanese said Monday, until a full list of ministers is announced next week.

Richard Marles was sworn in as deputy prime minister and minister for employment, Penny Wong as foreign minister, Jim Chalmers as treasurer, and Katy Gallagher as finance minister, minister for women and attorney-general.

Soon after the ceremony, Albanese and Wong boarded a flight to Tokyo for the Quad meeting where the Australian leader will appear alongside U.S. President Joe Biden, Japanese Prime Minister Fumio Kishida and Indian Prime Minister Narendra Modi.

Speaking to reporters ahead of his departure to Japan, Albanese said while in Tokyo he will take the opportunity to send a message to the world that there is a new government in Australia.

"It's a government that represents a change in the way that we deal with the world on issues like climate change...and the way that we value our friendships and long-time alliances," he said, adding that he will hold one-on-one meetings with the three other leaders on the sidelines of the summit.

Albanese also said that he received a phone call from Biden late Sunday, and had "a very fruitful and positive conversation" renewing his acquaintance with the U.S. president.

It remains unclear whether the Labor Party will win the 76 seats needed to form a majority government in the 151-seat House of Representatives, with projections by the Australian Broadcasting Corp. showing Labor on track to win 72 seats, while 12 seats remain in doubt.

If the Labor Party fails to secure the 76 seats, it is expected to go into negotiations with minor parties and independents to form a minority government.