Japan will slowly phase out oil imports from Russia while maintaining its interests in oil and gas projects in the Russian Far East, Prime Minister Fumio Kishida said Monday.

Kishida made the remarks as the nation balances the need to alleviate cost of living pressures while reducing its reliance on Russia in response to its war in Ukraine.

The premier told a virtual meeting of leaders of the Group of Seven nations earlier in the day that Japan will ban Russian oil imports "in principle" as part of additional sanctions levied on Moscow to punish it for its war launched in late February. 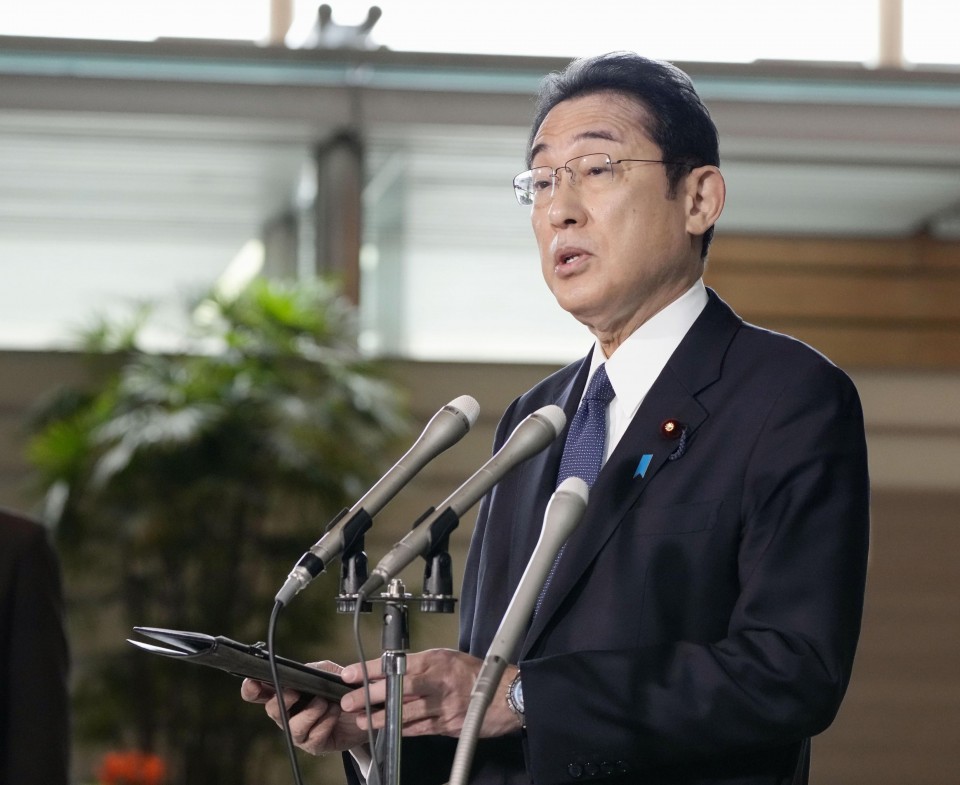 Prime Minister Fumio Kishida speaks to reporters at his office in Tokyo on May 9, 2022. (Kyodo)

"This is a very difficult decision, but the unity of the G-7 is most important now," Kishida said in Tokyo.

The measure on oil imports marks a major shift for resource-poor Japan, which had been reluctant to take the step as it tried to diversify its supplies. Tokyo has already announced it will phase out Russian coal.

Russia accounted for 3.6 percent of Japanese crude oil imports in 2021, coming after Saudi Arabia, the United Arab Emirates, Kuwait and Qatar. The four Middle Eastern countries provided about 90 percent of the oil supply in total.

Kishida noted the projects on Russia's Sakhalin, a large island north of the Japanese archipelago, are vital for his nation in securing a stable energy supply in the long term. The government and Japanese companies hold stakes in them.

"We will take steps to phase out in a manner that will minimize adverse effects on (Japanese) people's lives and business activities, but our plan to maintain our interests (in the projects) remains unchanged," he said.

Japan's top government spokesman, Chief Cabinet Secretary Hirokazu Matsuno, explained in a regular news conference that maintaining interests in the projects is also important to ensure the effectiveness of sanctions against Russia.

"If we exit from the Sakhalin 1 and 2 projects and Russia or a third country obtains the interests, it will benefit Russia, and there is a possibility that the sanctions will not be effective," said Matsuno.

Kishida did not give a specific timeline for the steps, only saying Japan will reduce or halt imports "in light of the reality."

Industry minister Koichi Hagiuda said Japan will be urging other oil-producing nations to increase their output as the phasing out of Russian crude is expected to intensify an international race to secure supplies.

Matsuno also said that Japan needs to diversify energy sources and suppliers to reduce its reliance on Russia and that the country will "take every measure," including the use of renewable and nuclear power, to that end.

Japan has been seeking to restart nuclear power plants halted in the wake of the Fukushima nuclear crisis in 2011. Kishida said the country will continue to put safety first and gain local consent to restart plants.

Japan not pulling out of Russian energy project: PM Kishida