U.S. President Joe Biden on Monday launched an Indo-Pacific economic initiative joined by a dozen countries including Japan, setting the stage for deeper engagement in the fast-growing region where China is expanding its clout.

The Indo-Pacific economic framework, or IPEF, is touted by the United States as a "21st-century economic arrangement" that will tackle new challenges ranging from setting standards for the digital economy, ensuring secure supply chains and helping make major investments for clean energy transition.

But details, including how negotiations will proceed and how agreements will be enforced, remain unclear, leaving questions as to whether the initiative can become a credible alternative to major regional free trade agreements that the United States has opted out of but Beijing has increasingly sought to join. 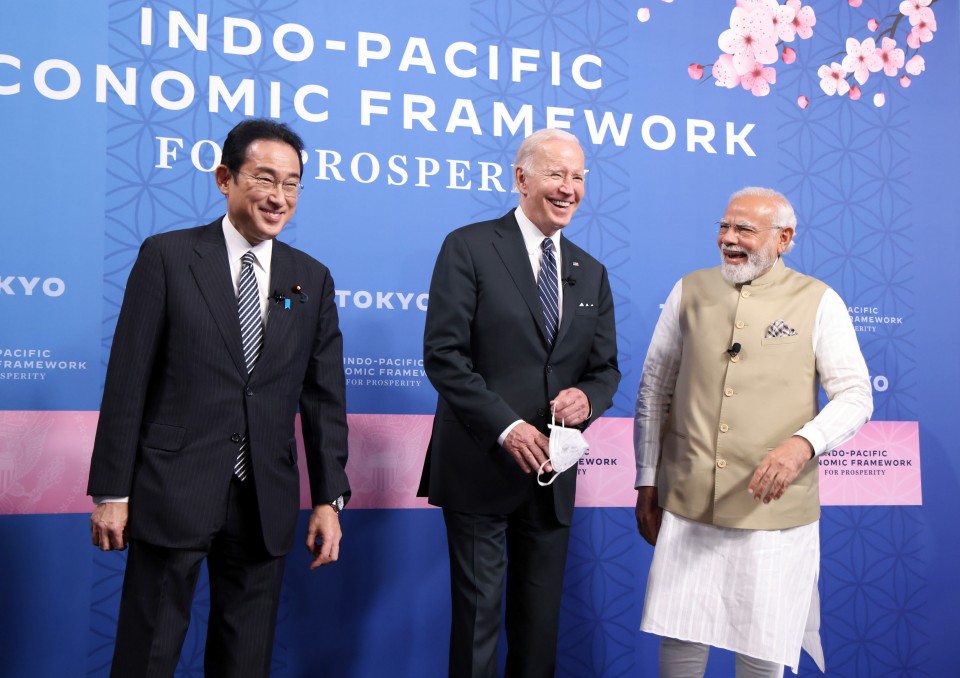 (From L) Japanese Prime Minister Fumio Kishida, U.S. President Joe Biden and Indian Prime Minister Narendra Modi attend a photo session at the start of the launch event of the Indo-Pacific economic framework, or IPEF, in Tokyo on May 23, 2022. (Pool photo) (Kyodo) ==Kyodo

In addition to the United States, the initial members are Australia, Brunei, India, Indonesia, Japan, Malaysia, New Zealand, the Philippines, Singapore, South Korea, Thailand, and Vietnam, according to the U.S. government. The members together represent 40 percent of the world's gross domestic product.

Noting that joining the framework means signing up to work toward an economic vision for a "free and open" Indo-Pacific, Biden said during a launch event that a long-term U.S. commitment to the region and the work with partners will help "win the competition of the 21st century together."

In a statement, the 13 countries acknowledged that "deepening economic engagement among partners is crucial for continued growth, peace, and prosperity," and the Indo-Pacific Economic Framework for Prosperity is expected to contribute to such cooperation.

Many of the 13 nations, including Japan, Australia and Singapore, are members of what was originally called the Trans-Pacific Partnership free trade deal, which Biden's predecessor Donald Trump withdrew the United States from in 2017.

The Biden administration has been clear that the IPEF will not be a traditional free trade agreement that involves tariff-cutting commitments, reflecting persistent concerns inside the United States that free trade deals and globalization in the past have led to offshoring and erosion of U.S. jobs.

But trade experts have questioned whether the IPEF can provide meaningful incentives for participation without offering greater market access to the world's largest economy, which, in usual trade talks, has served as a carrot for Washington's bid to set tougher labor standards or boost intellectual property protection.

According to the Biden administration, the IPEF will center on four pillars -- fair and resilient trade, supply chain resilience, infrastructure and clean energy, and tax and anti-corruption.

Member countries do not necessarily have to join all pillars, and can choose to participate only in certain components of the framework.

The joint statement said that members will start "collective discussions toward future negotiations" on the four pillars.

The IPEF partners will engage in discussions on "various ways to strengthen economic cooperation" to achieve the goals of the pillars, while inviting other interested Indo-Pacific partners to join them, the document said.

With the region's e-commerce sector rapidly growing, the trade pillar will focus on pursuing "high-standard rules of the road in the digital economy," including standards on cross-border data flows and data restrictive measures, while addressing concerns over online privacy and unethical use of artificial intelligence, according to the U.S. government.

The IPEF will also seek "first-of-their-kind supply chain commitments" that better anticipate and prevent disruptions in supply chains, after the coronavirus pandemic exposed the fragility of the global supply chain for semiconductors and other products.

Under the clean energy pillar, members will deepen cooperation on technologies and mobilize financing, including concessional financing, by supporting the development of sustainable infrastructure and by providing technical assistance.

Biden said at the launch event that he expects "a lot of hard work ahead" of the members to forge consensus on each of the pillars.

"But...it's clear that we all recognize the fundamental direction we need to move in. We share the same goal of ensuring a free and open Indo-Pacific that will deliver greater prosperity and greater opportunity for all of our children," he added.

Kishida said it is important to come up with "concrete deliverables" at an early date in areas each member feels necessary so that the IPEF will become a "meaningful" framework for the regional economic order.

Biden initially made the proposal to develop the IPEF in the fall during virtual regional meetings, with the announcement of the launch of IPEF negotiations coming as he makes his first visit to Asia since becoming president in January last year.

U.S. Commerce Secretary Gina Raimondo told a press conference prior to Biden's trip to South Korea and Japan that the United States is seeking to urgently fill "a vacuum" that has been created since the Trump administration "disengaged" with the region.

After Trump pulled the United States out of the TPP, which was seen as a counterweight to China's growing influence in the region, Japan and the other 10 remaining members moved to salvage most of the deal, which has been renamed the Comprehensive and Progressive Agreement for Trans-Pacific Partnership.

The declining U.S. economic presence in the region has become more obvious as another mega trade deal involving 15 Asia-Pacific countries, including Japan, China, South Korea, Australia and members of the Association of Southeast Asian Nations, took effect in January this year. China, meanwhile, applied to join the CPTPP last year.

The Japanese government believes that a U.S. return to the CPTPP is the most desirable outcome, but has nevertheless welcomed the new initiative as a sign that Washington is stepping up its engagement in the region.

One issue has been whether Taiwan will join the framework, a potentially controversial move as it could upset China and complicate efforts to bring in Southeast Asian nations, many of which have close ties with China.

China views Taiwan as a renegade province to be reunified with the mainland, by force if necessary. Taipei, although having reportedly expressed its desire to join the IPEF, was not among the initial partners.

A White House official said Sunday that the United States is looking to deepen its economic partnership with Taiwan, including on semiconductors and supply chains, but added, "We're pursuing that in the first instance on a bilateral basis."

The following is the gist of a statement issued by the United States and 12 other countries upon the launch of the Indo-Pacific Economic Framework for Prosperity on Monday.

-- participants acknowledge that deepening economic engagement among them is crucial for growth, peace and prosperity.

-- will focus on four pillars -- trade, supply chains, clean energy and infrastructure, and tax and anti-corruption.

-- participants will launch discussions toward future negotiations on the four pillars.

-- members invite participation from additional Indo-Pacific partners that share their goals and interests.