Shohei Ohtani allowed five runs and struck out 10 batters in an uneven outing as the Los Angeles Angels suffered a 6-3 series-opening defeat to the Toronto Blue Jays on Thursday.

Ohtani (3-3) took the loss against the Blue Jays at Angel Stadium, yielding six hits, including a game-opening leadoff homer and a sixth-inning leadoff homer, while walking one over six innings. He was pitching on seven days' rest. 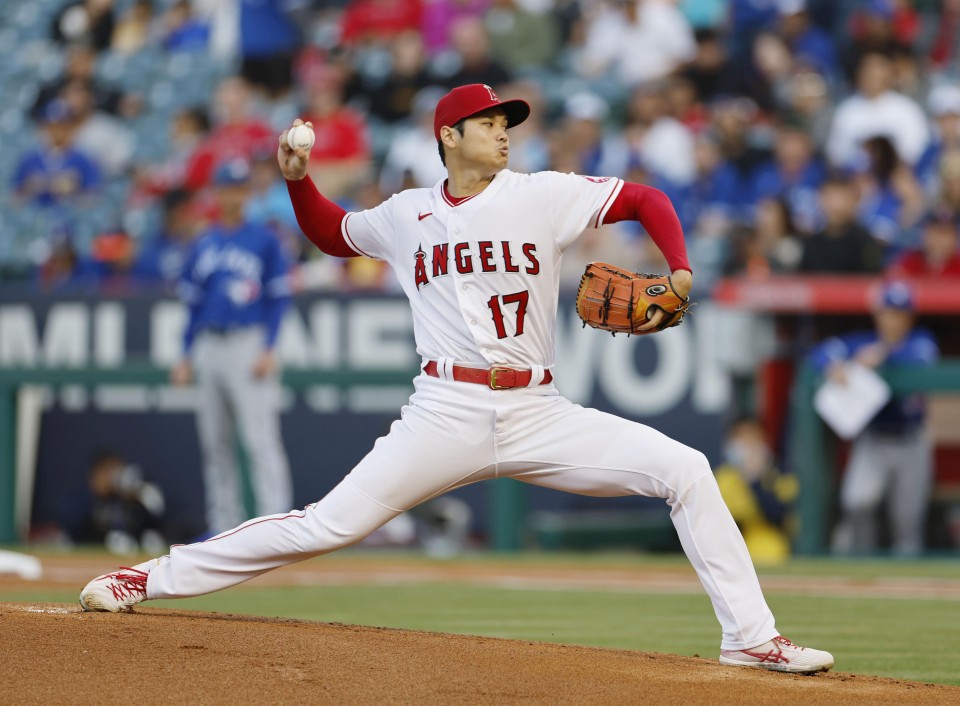 Shohei Ohtani of the Los Angeles Angels throws a pitch during a baseball game against the Toronto Blue Jays on May 26, 2022, at Angel Stadium in Anaheim, California. (Kyodo) ==Kyodo

"I got a fair number of strikeouts but it was as if I was tricking myself (into not feeling the stiffness in my lower back)," Ohtani said.

"But overall, I couldn't just let the ball fly the way I wanted."

As the Angels' designated hitter, he went 0-for-2 with an RBI fielder's choice and a walk, and left for a pinch-hitter in the eighth. Ohtani has hit in all eight games he has pitched this season.

At Cincinnati's Great American Ball Park, Chicago Cubs right fielder Seiya Suzuki went 1-for-2 with a stolen base, but left the game after he jammed his left ring finger sliding into second base in the third inning.

"The game just finished so it's hard for me to comment," Suzuki said of his injury that the team called a sprain.

"I couldn't even hold my bat so I figured I shouldn't play. I'll have to rest tomorrow and see how it feels. I want to return as soon as possible."

The Cincinnati Reds beat the Cubs 20-5, tallying their highest run count in 23 years. They had a combined 20 hits, including two home runs and five RBIs from Kyle Farmer.