Japanese Prime Minister Fumio Kishida and his Thai counterpart Prayut Chan-o-cha agreed Thursday they will never tolerate the attempt to change the status quo by force in Ukraine in response to Russia's invasion of the country.

Kishida told the Thai prime minister in their summit in Tokyo that the international community needs to be "on the same page in raising the voice of opposition against Russia," according to the Japanese Foreign Ministry. 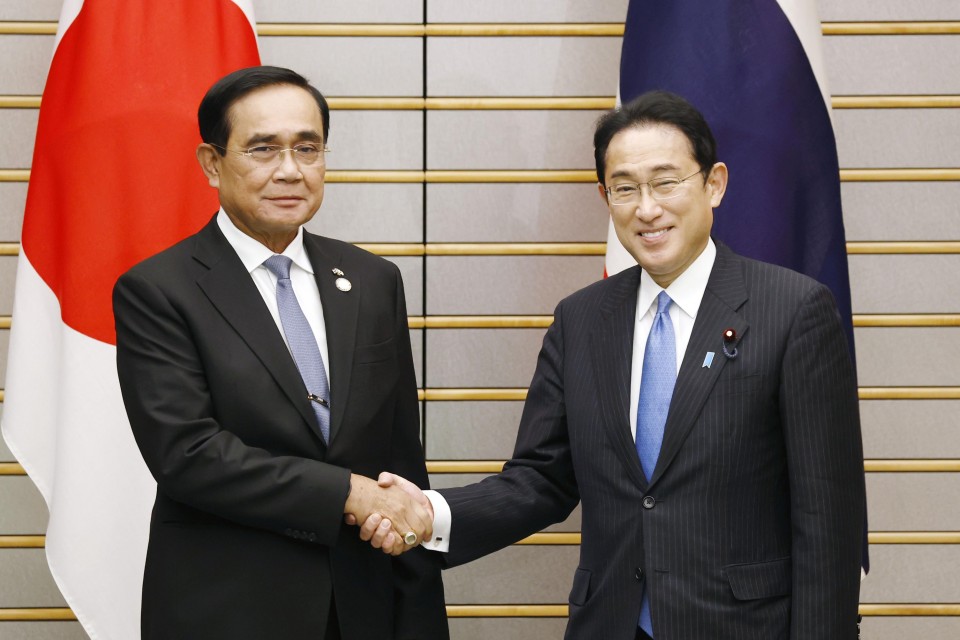 Japanese Prime Minister Fumio Kishida (R) and his Thai counterpart Prayut Chan-o-cha shake hands ahead of their talks in Tokyo on May 26, 2022. (Kyodo)

Prayut said in response that Thailand shares the same view with Japan on Russia's aggression against Ukraine in principle, adding that diplomatic efforts are vital to end the war as soon as possible, according to the ministry.

Japan has imposed sanctions on Russia over the invasion in coordinated efforts with other Group of Seven countries, while Thailand maintains a neutral policy on the Russia-Ukraine conflict.

The meeting comes as Japan is seeking to enhance ties with Southeast Asian countries to counter the growing political and economic clout of an assertive China amid concerns over a similar situation taking place in the region as Russia's military aggression continues.

Kishida expressed Japan's cooperation for a successful Asia-Pacific Economic Cooperation summit meeting to be held in November in Bangkok chaired by Thailand.

In a separate meeting with Singaporean Prime Minister Lee Hsien Loong the same day, Kishida asked for cooperation to realize "a free and open Indo-Pacific."

During the meeting, Lee welcomed the establishment of the Indo-Pacific economic framework or IPEF by the United States on Monday with 13 countries including Japan and Singapore participating in the deal.