A tourist boat that sank off Hokkaido last month, leaving 14 people dead and 12 missing, was successfully raised to the surface Thursday after an initial attempt to salvage the vessel earlier this week resulted in it sinking to greater depths.

Nippon Salvage Co., hired by the Japan Coast Guard, lifted the 19-ton Kazu I from the seabed at a depth of 182 meters, with its hull breaking the surface at around 6:55 p.m. 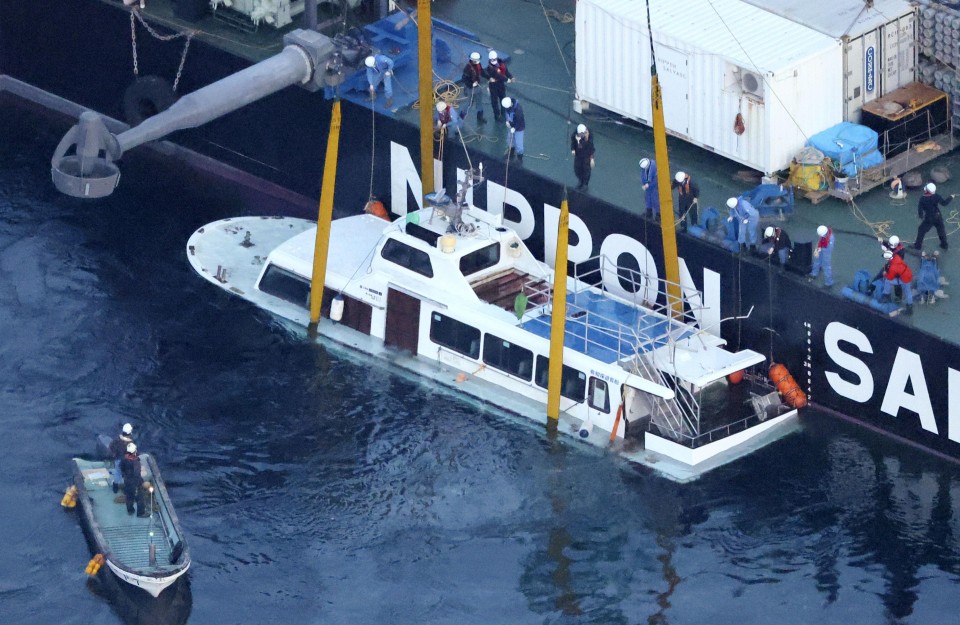 The tourist boat Kazu I is raised to the surface of the sea off the Hokkaido town of Shari, northern Japan, on May 26, 2022, as seen in this photo from a Kyodo News helicopter. (Kyodo)

The boat is scheduled to be placed on the deck of the barge Kaishin using a crane Friday morning after being taken to shallow waters, where its anchor can be dropped.

According to the coast guard, the boat was lifted from the seabed around 3 p.m. Thursday, pulled up by nylon belts wrapped around its bow and stern and tightened to a steel frame lowered with wires.

While being taken to shallow waters, the vessel will be secured using belts and ropes in a "side-hugging" technique, with the starboard side of the Kazu I resting against the port side of the barge.

The belts are stronger than those used in the salvage company's initial attempt. The tour boat will be transported to the port of Abashiri as early as Friday, and seawater will be drained for several days before finally bringing it ashore.

The boat was on the seabed about 11 kilometers west of Utoro port in Shari, from where it departed on April 23 for a three-hour cruise around the Shiretoko Peninsula, a World Natural Heritage site, with 26 people aboard, despite bad weather forecasts and warnings.

The boat dropped back to the seabed on Tuesday while being towed to shallow waters after it was raised to a depth of around 20 meters.

It was located on the seabed at a depth of around 120 meters on April 29 near Kashuni Falls, a popular scenic site near the tip of the peninsula, from where it had issued a distress call.

The coast guard is continuing to search for the missing using patrol vessels and aircraft. Deepwater divers ended a two-day search inside the boat last week after finding no trace of the missing.

The coast guard intends to launch a full-fledged investigation into the cause of the accident at the port of Abashiri, hoping to find clues about the fate of the 12 people unaccounted for.

The Japanese government is also communicating with Russian authorities after two bodies, possibly of the missing, were found washed up on Kunashiri, one of four Moscow-controlled islands off Hokkaido that are at the heart of a territorial dispute with Tokyo. 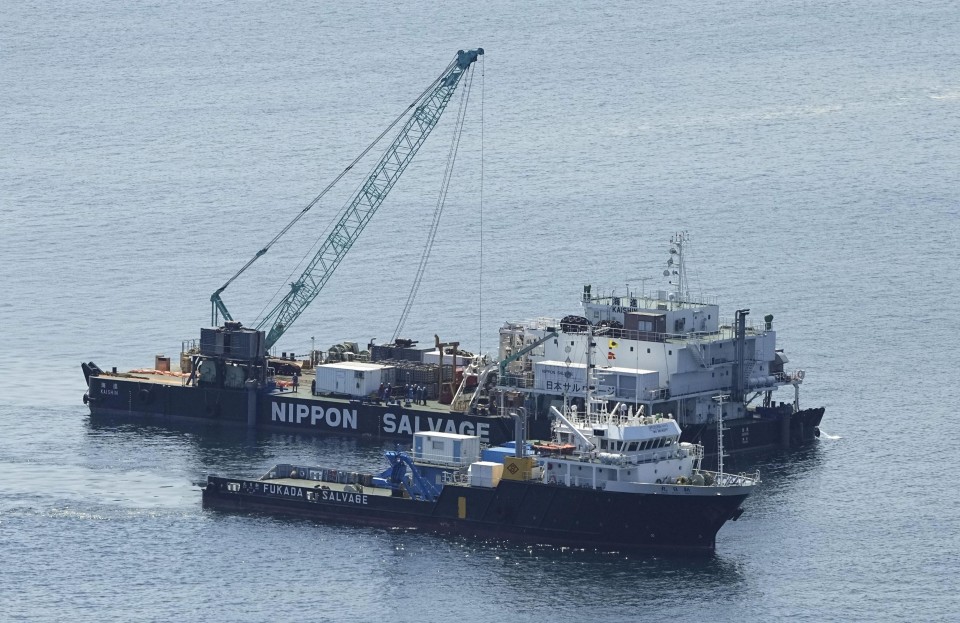 Photo taken May 26, 2022, from a Kyodo News helicopter shows operations off the Hokkaido town of Shari, northern Japan, to salvage a tourist boat that sank in late April with 26 people aboard. The boat dropped back to the seabed at a depth of 182 meters while being towed by a salvage company on May 24. (Kyodo) ==Kyodo