About 130 production bases at Toyota Motor Corp., its affiliates and other businesses in central Japan on Wednesday faced a severe industrial water supply disruption caused by a massive leak, with some operations at the carmaker, its supplier and others suspended.

The leak was first detected Sunday at a facility in Aichi Prefecture that stores water taken from a nearby river and used by plants in the area, according to the operator. 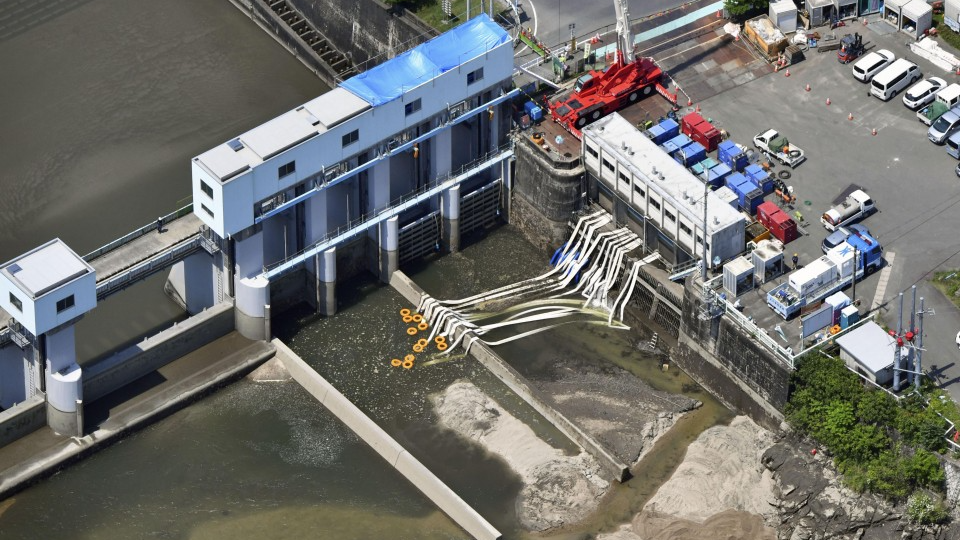 Photo taken from a Kyodo News helicopter on May 18, 2022, shows a water pumping and storage facility in Toyota, Aichi Prefecture, where a major leak occurred. (Kyodo)

Toyota suspended part of parts production Wednesday and said its Toyota Industries Corp. affiliate will stop daytime vehicle assembly operations at one of its factories in Aichi on Thursday.

Other Toyota affiliates Jtekt Corp. and Denso Corp. said they do not expect production to be affected in the foreseeable future as they have water stored and access to well water. Some other group firms were examining the impact.

Power company Jera Co. said it halved output at a thermal power plant in the prefecture from 8 p.m. to save water usage. Two power generators run by Osaka Gas Co. were also affected by the supply disruption.

Toyota and other companies used well water and other sources to run their plants Wednesday. The water was used to cool and clean components at various industrial operations, the prefectural officials said.

The farm ministry's bureau in central Japan, which operates the water facility, said Wednesday the massive leak was caused by a hole in the bed of a reservoir.

With the leak, a water purification plant has been unable to secure the required amount of water, and the lack of reservoir water will force it to halt its supply to the businesses.

The average daily water supply from the water purification plant in Anjo was around 143,000 cubic meters in April, according to the prefectural government.