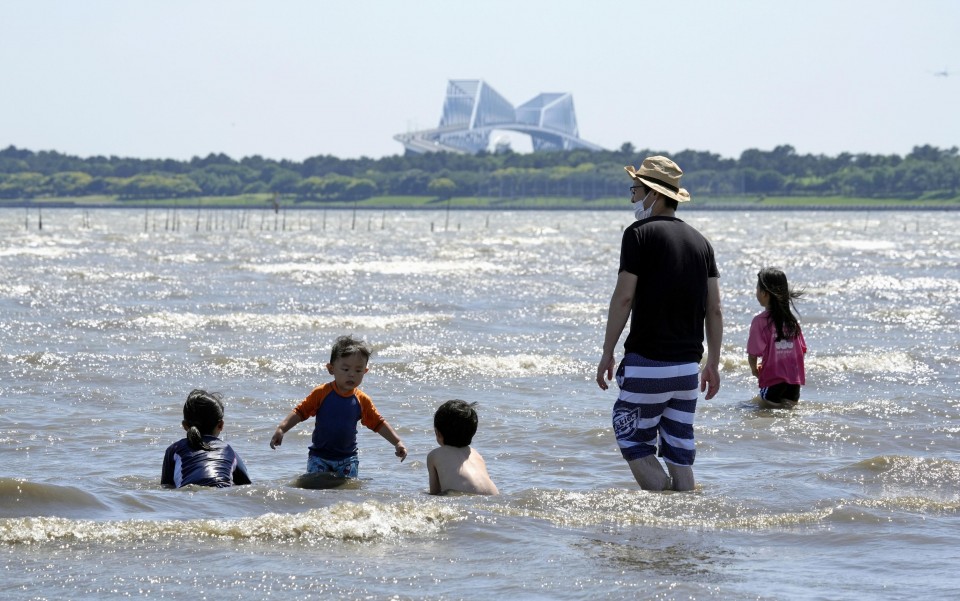 People bathe at a beach at Kasai Marine Park in Tokyo during hot weather on May 29, 2022. (Kyodo) ==Kyodo

Of the eight, six automakers, including Toyota Motor Corp. and Honda Motor Co., marked declines. Toyota saw a 9.1 percent fall to 692,259 cars, the first decrease in three months and below its forecast of about 750,000 units.

In a statement, the ministers from Britain, Canada, France, Germany, Italy, Japan and the United States plus the European Union "condemn in the strongest terms" Pyongyang's test-firing of an intercontinental ballistic missile last Wednesday, an act they say "undermines international peace and security."

SHANGHAI - Shanghai will lift its two-month-long lockdown from midnight on Wednesday, the municipal government said Monday, allowing most of the city's citizens to leave home.

China's financial and commercial hub with a population of around 25 million has been locked down in a phased manner since March 28 amid the spread of the highly contagious Omicron variant of the coronavirus.

TOKYO - Japan will undergo a policy review by the U.N. Committee on the Rights of Persons with Disabilities in late August following a two-year delay due to the coronavirus pandemic, sources close to the matter said Monday.

The review, Japan's first, will recommend non-legally binding policy improvement measures to improve the lives and societal participation of people with disabilities. Japan ratified the Convention on the Rights of Persons with Disabilities in 2014.

NAGASAKI - The Nagasaki city government was ordered by a court Monday to pay around 19.75 million yen ($155,000) in compensation to a female journalist who was sexually assaulted by a male senior official in 2007 and suffered additional harm as a result of falsehoods spread by another official.

The plaintiff's side had demanded that the southwestern Japan city pay around 74 million yen in the suit filed at the Nagasaki District Court, arguing the now-deceased official misused his position and exercised authority to assault the reporter, and the city also failed to prevent additional harm.

KOBE - Japanese supercomputer Fugaku has lost its position as the world's fastest in terms of computing speed, ranking second after topping the list in a twice-yearly ranking the last four times in a row, its developer Riken research institute said Monday.

Named after an alternative word for Mt. Fuji, Fugaku lost the top spot to the Frontier supercomputer of the U.S.-based Oak Ridge National Laboratory, out of a ranking of 500 supercomputers.

KATHMANDU - The bodies of 16 of the 22 passengers and crew of a light plane that went missing in central Nepal were recovered when search teams reached the wreckage on Monday, aviation authorities said.

Local police and members of the Nepal Army climbed to the crash site as helicopters could not access the mountainous area in Sanosware, Mustang district, at an altitude of some 4,420 meters, according to Tek Raj Sitaula, a spokesman of the Tribhuvan International Airport in Kathmandu.