Up to around 6,100 people would die in the event a major earthquake hits the heart of Tokyo, the metropolitan government said in a report Wednesday, revising down the estimate by around 30 percent from a decade ago.

The report by the metropolitan government's panel of earthquake experts attributes the reduction of about 3,500 people to advances in the quake resistance of buildings and the greater use of non-combustible materials in their construction.

The panel simulated significant earthquakes with different epicenters for the latest damage projection, and concluded that the largest death toll of up to 6,148 would result if a quake with a magnitude of 7.3 originated in the southern part of central Tokyo.

Such a temblor would register the maximum 7 on Japan's seismic intensity scale, and rock some 60 percent of Tokyo's 23 wards with an intensity of upper 6 or above.

At an intensity of upper 6, many people find it impossible to remain standing or move without crawling. According to the meteorological agency, the jolts are strong enough to toss people through the air.

Of the estimated deaths, 3,209 would be caused by collapsed buildings and 2,482 by fires, the report said. 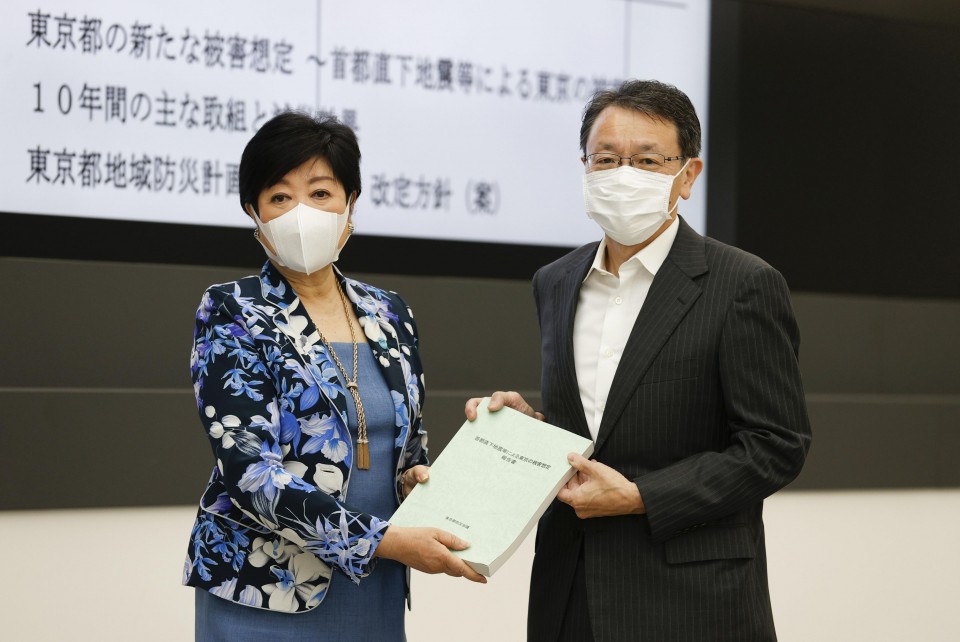 Naoshi Hirata (R), professor emeritus at the University of Tokyo and head of the Tokyo metropolitan government's earthquake experts panel, hands a simulation report to Gov. Yuriko Koike in Tokyo on May 25, 2022. (Kyodo)

Around 194,000 homes and other buildings would be damaged, while some 4.53 million people would be unable to return to their homes.

Among the factors cited for the reductions in the death and damage estimates is an improvement in the earthquake resistance of houses, with the proportion of quake-resistant houses increasing from 81 percent to 92 percent in 2020 in the space of 10 years.

Another factor is a decrease in densely populated wooden housing areas where fires can easily spread.

During the rapid urbanization period in postwar Tokyo, such areas were developed on about 16,000 hectares of land, mainly just outside the JR Yamanote loop line, according to the metropolitan government.

But thanks in part to subsidies for demolishing old housing units or replacing them with new ones, the acreage of such areas has shrunk over the years to about 8,600 hectares in 2020.

The panel of experts indicated that if further measures are taken, the number of deaths from collapsed buildings and fires could be reduced to around 800.

"Although the number of deaths has been reduced, losses of as many as 6,000 people must not be allowed to happen," Naoshi Hirata, head of the panel and professor emeritus at the University of Tokyo, said. "It is necessary to steadily advance measures."

The metropolitan government is expected to revise its disaster prevention plan based on the latest projections.

Quick evacuation could cut quake fatalities by 80% in northern Japan