The United States on Friday imposed fresh sanctions on North Korea over its development of weapons of mass destruction and ballistic missiles, a day after China and Russia vetoed a U.N. Security Council resolution to slap tougher sanctions on Pyongyang.

The Treasury Department said two banks, one trading company and one individual are the targets of the new sanctions for their support of North Korea's weapons development programs. 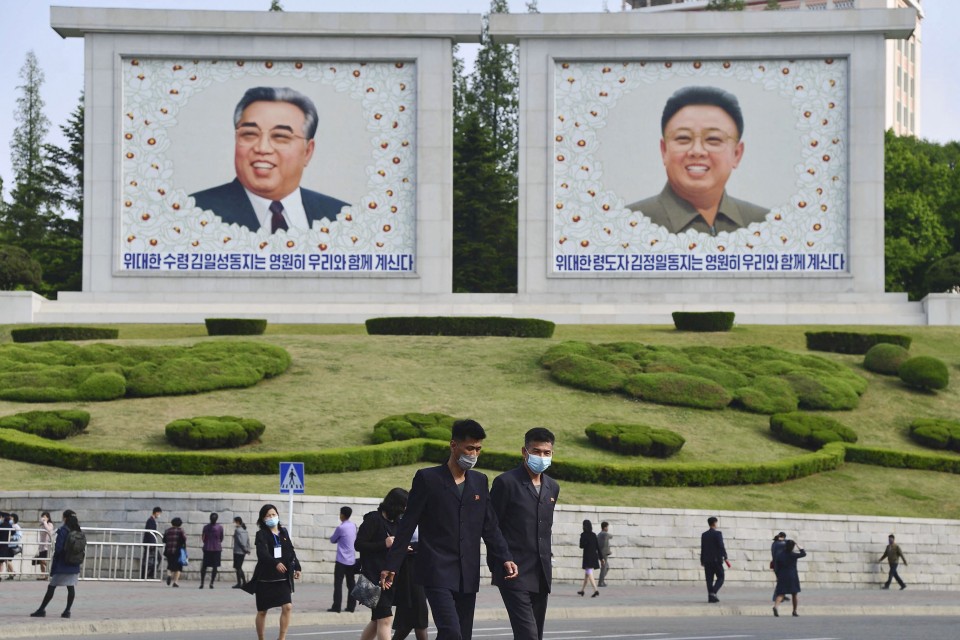 People wearing face masks walk by portraits of late North Korean leaders Kim Il Sung and Kim Jong Il in Pyongyang on May 6, 2022. North Korea's state-run media reported on May 12 that the country had detected the Omicron variant of the coronavirus from a sample collected in Pyongyang earlier in the month. (Kyodo) ==Kyodo

"The United States will continue to implement and enforce existing sanctions while urging the DPRK to return to a diplomatic path and abandon its pursuit of weapons of mass destruction and ballistic missiles," said Brian Nelson, undersecretary of the treasury for terrorism and financial intelligence, referring to the country by the acronym for its official name, the Democratic People's Republic of Korea.

According to Treasury, the two banks subject to the sanctions are Russian financial institutions -- the Far Eastern Bank and Bank Sputnik.

The Air Koryo Trading Corp. was also designated a sanctions target "for providing, or attempting to provide, financial, material, technological or other support for, or goods or services" in support of the Ministry of Rocket Industry, the department said.

Jong Yong Nam, an individual who has been in Minsk, Belarus, since 2019, "has directly supported or helped generate revenue" for a North Korean organization linked to the ballistic missile development, it added.

The U.S.-proposed Security Council resolution aimed at enhancing sanctions on North Korea over its multiple ballistic missile launches this year was rejected Thursday, marking a first since sanctions on Pyongyang were initially adopted in 2006.

North Korea has repeatedly test-fired ballistic missiles this year, including a launch of an ICBM in March, bringing an end to a self-imposed moratorium on such tests dating back to April 2018.

Speculation is also growing that it may carry out a nuclear test in the near future as North Korea shows no signs of returning to negotiations with the United States. Pyongyang has not tested nuclear devices since September 2017.