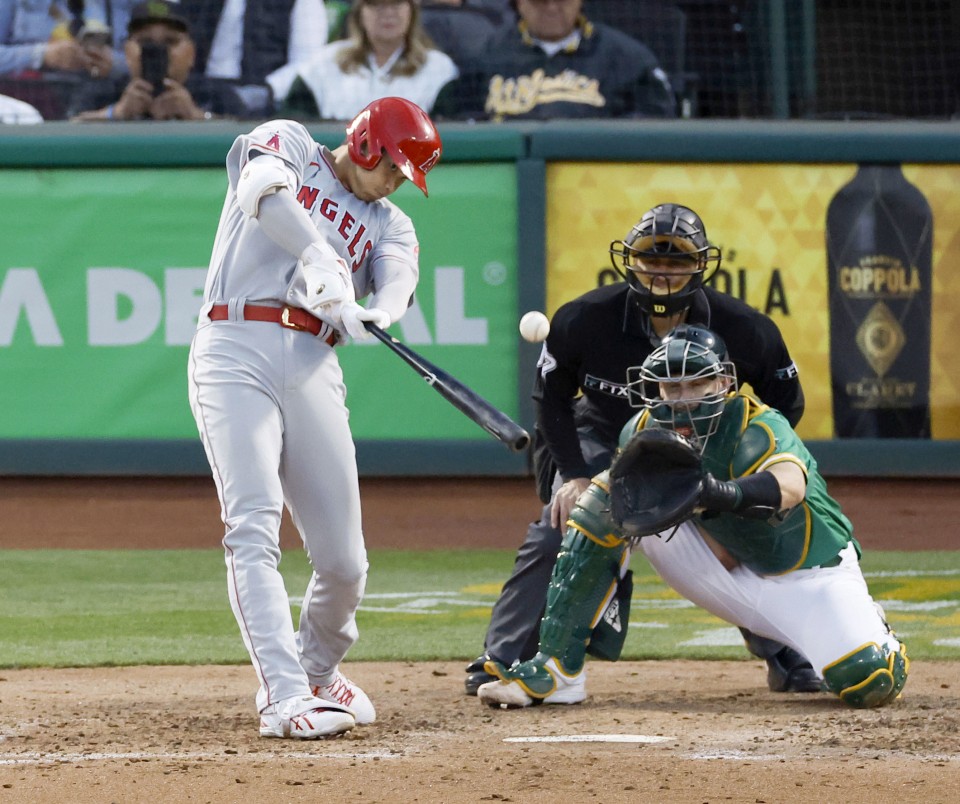 Shohei Ohtani of the Los Angeles Angels hits his 100th homer in Major League Baseball in the fifth inning of a baseball game against the Oakland Athletics on May 14, 2022, at Oakland Coliseum in Oakland, California. (Kyodo)

"It's still early in the season, and I'll be doing my best to get more (home runs)," said Ohtani after his 444th game in which he featured as a batter.

"I think people have high expectations of me getting extra-base hits, so (getting the record) is big in that sense."

According to MLB.com, Babe Ruth was the only previous MLB player with 100 home runs and 250 strikeouts.

"I've had surgeries and other things too, but I'm glad to have played this much and come so far," said Ohtani, who has been a fanatic about his fitness and nutrition since he was a youngster with the Nippon Ham Fighters and used to haul a huge suitcase packed with supplements and protein on road trips.

Ohtani said former New York Yankee Hideki Matsui was a player he looked up to and vowed to raise his own game at the plate.

"He was a better batter in general. He's always been my target," Ohtani said. "The best batters are those who can draw walks and also get extra-base hits."

"I've been talking with my coaches about adjustments. I feel I've been expanding my strike zone a bit. I think if only I can be more selective and only offer on pitches I can put good swings on, I'll be better off."

Ohtani's 99th MLB home run on May 9 against the Tampa Bay Rays was the first grand slam since he turned pro out of high school. His 100th, belted off Adam Oller (0-3) over the center-field wall at Oakland Coliseum, was his seventh this year.

Ohtani was 2-for-4 with an RBI in the Angels' 4-3 walk-off loss in Saturday's opener. Ohtani's homer was his only hit in five at-bats in the second game.

Seiya Suzuki, who has been carrying a right ankle injury, returned to the starting lineup for the first time in four games and went 1-for-4 and scored in the Chicago Cubs' 4-2 win against the Arizona Diamondbacks.

Although he started the season on a tear, Suzuki has struggled to time MLB pitching in recent weeks.

"I just happened to put a good swing on (the single), so I'm glad," Suzuki said. "However, things still don't feel right, and it's like I'm testing out different things."