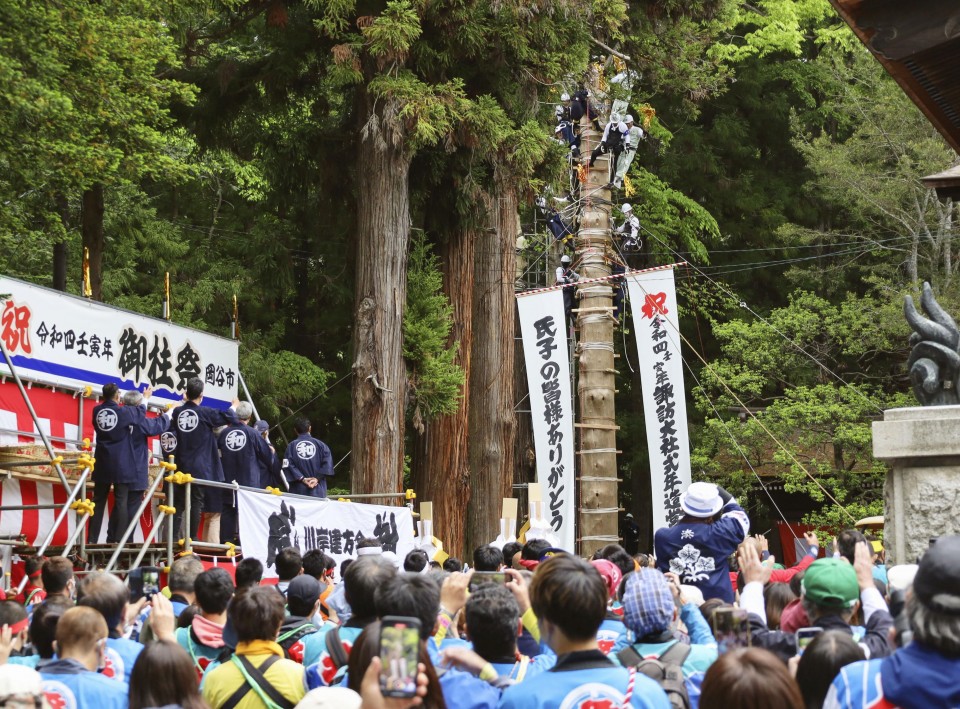 A 17-meter-long trunk is erected vertically in Shimosuwa in the central Japan prefecture of Nagano on May 16, 2022, the final day of the Onbashira Festival at Suwa Taisha shrine. (Kyodo) ==Kyodo

TOKYO - Japan will accept small-scale tours for vaccinated tourists from the United States, Australia, Thailand and Singapore as a trial later this month toward the full-scale reception of foreign visitors planned for June, the government said Tuesday.

Japan has closed its borders to foreign tourists since the early stage of the coronavirus pandemic in 2020. But it has been relaxing its travel restrictions in phases since March, accepting businesspeople, technical interns and students, as the COVID-19 situation has improved.

Once it clears parliament, the supplementary budget for the year that started in April will be used to finance part of a 6.2 trillion yen relief package compiled in late April.

YAMAGUCHI, Japan - A 24-year-old man mistakenly sent 46.3 million yen ($360,000) in COVID-19 relief money by the western Japan town he resides in, says he gambled it all away on overseas casino sites, sources close to the matter said Tuesday.

The man is unlikely to be able to return the money transferred to him in error by the town of Abu, Yamaguchi Prefecture, according to his lawyer, who said a resolution through litigation is being considered.

The chipmaker plans to restart in 2024 its Kofu factory in Yamanashi Prefecture, which had been shuttered in 2014, implementing new high-end equipment and doubling its power semiconductor output.

BEIJING - North Korea on Tuesday reported more than 269,500 new cases of fever and six more deaths in the past day as suspected coronavirus cases continue to spread rapidly.

The number of new fever cases between Sunday evening and 6 p.m. Monday fell from some 392,900 cases recorded the day before. The total number of deaths now stands at 56, the state-run Korean Central News Agency said.

PHNOM PENH - Cambodian Prime Minister Hun Sen said Tuesday that he has decided to shift his official date of birth to the day he was actually born, despite having used the wrong day for a few decades.

Hun Sen said he made the decision following the death of his elder brother on May 5, which he suspects might be in some way related to his sibling also having an incorrect date of birth that caused a conflict with the Chinese zodiac calendar.

MANILA - Outgoing President Rodrigo Duterte's efforts to liberalize foreign ownership of key industries in the Philippines were important as much as a "danger" should the next leader fail to safeguard national security, an economist says in commenting on Duterte's economic policy.

President-elect Ferdinand Marcos Jr. is likely to continue Duterte's infrastructure program, foreign borrowing and a friendly approach to China used as a means to pull the economy out of deep recession in 2020 due to the coronavirus pandemic.

TOKYO - The Japanese government said Tuesday it will request companies operating bullet trains to accelerate construction work to boost the earthquake resistance of shinkansen lines if it is technically viable.

The move comes after services on the Tohoku Shinkansen Line were suspended for about a month due to a magnitude 7.4 quake that hit the country's northeast in March.