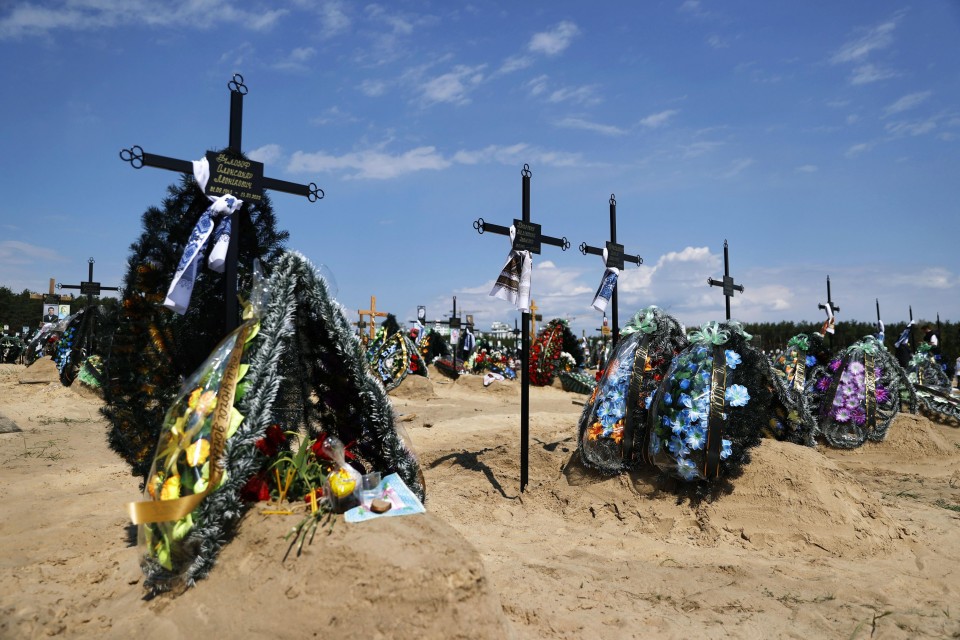 Photo taken May 3, 2022, shows a gravesite in Irpin, near Kyiv, amid Russia's invasion of Ukraine. (Kyodo) ==Kyodo

WASHINGTON - The defense chiefs of Japan and the United States on Wednesday agreed to align the two countries' security strategies and strengthen cooperation to deter any attempt to change the status quo by force in the Indo-Pacific amid China's growing assertiveness.

The meeting in the Pentagon took place as Japan plans to update its National Security Strategy by the end of this year, with Russia's war against Ukraine generating a fresh drive in Tokyo toward beefing up its defense and deterrence capabilities.

TAIPEI - A delegation of youth division members of Japan's ruling Liberal Democratic Party reaffirmed the importance of peace and stability in the Taiwan Strait in terms of the security of Tokyo and Taipei in talks Thursday with Taiwan President Tsai Ing-wen.

Diet member Norikazu Suzuki of the delegation expressed opposition in the talks to Russia's invasion of Ukraine and told Tsai that Japan is against any unilateral change to the status quo by force, describing Taiwan and Japan as "two countries" geographically close to each other.

LONDON - Japan and Britain are expected during their leaders' summit Thursday to agree in principle to allow their troops to enhance cooperation as they aim to make the Indo-Pacific region "free and open" despite an assertive China's clout there.

Russia's invasion of Ukraine and support for the war-torn nation are also high on the agenda for Japanese Prime Minister Fumio Kishida and his British counterpart, Boris Johnson, as both nations maintain strong sanctions to punish Moscow for its aggression.

WASHINGTON - Japan's industry minister showed a negative view Wednesday about keeping pace with the European Union over its plan to ban oil imports from Russia as an additional sanction against Moscow following its invasion of Ukraine.

"Japan has limited resources and it is difficult for us to immediately align ourselves" with the EU, Economy, Trade and Industry Minister Koichi Hagiuda told reporters in Washington after meeting with senior U.S. officials.

TOKYO - Nearly 80 percent of people in Japan think the burden on Okinawa in hosting the bulk of U.S. forces in the country is not fair compared with other prefectures, a Kyodo News survey showed Wednesday.

The nationwide mail survey, conducted ahead of the 50th anniversary of Okinawa's reversion to Japanese administration on May 15, found that 58 percent of respondents supported transferring some of the U.S. military facilities outside of the southern prefecture.

TOKYO - A manga adaptation of a Nobel winner's book on the experiences of women who served in the Soviet Union's campaign against Germany in World War II is proving a timely success among Japanese readers looking to better understand war amid the Russian invasion of Ukraine.

The comic series is based on and shares its name with the Japanese title for Nobel Prize in literature winner Svetlana Alexievich's 1985 nonfiction book "The Unwomanly Face of War." She interviewed over 500 women to tell their frontline stories, and the manga carefully recounts them to challenge perceptions of war.