Japan's ruling Liberal Democratic Party will propose that the government sharply increase its defense spending, party members said Thursday, suggesting they will push for, at a minimum, an amount equivalent to 2 percent of the nation's gross domestic product, double the current level.

The party's draft proposal for revising the government's National Security Strategy will also include the controversial idea of possessing the ability to disable an enemy country's missiles in its territory, as well as its command and control systems.

The proposal was approved at a meeting of LDP's Research Commission on National Security and will be submitted to Prime Minister Fumio Kishida next week so it can be reflected in the government's review of the long-term guideline, to be finalized by the end of the year. 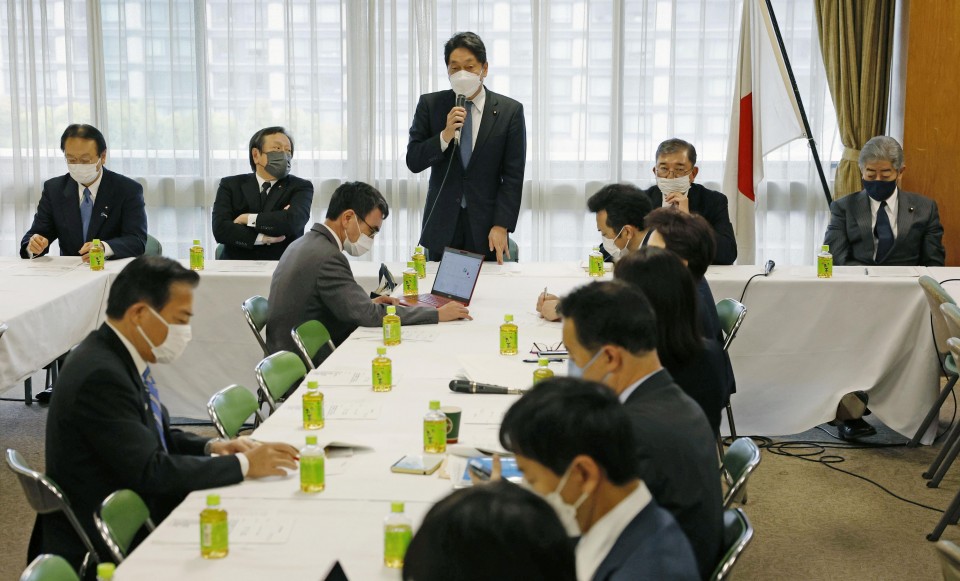 The Liberal Democratic Party's Research Commission on National Security holds a meeting at the party headquarters in Tokyo on April 21, 2022. (Kyodo)

The proposal for acquiring such an attack capability, however, could fuel concerns that the country would deviate from its exclusively defense-oriented policy under the war-renouncing Constitution.

The move comes amid China's growing military clout at a time when Russia's invasion of Ukraine has left many wondering what that could mean to the region's security. North Korea's intercontinental ballistic missile test-launch last month has also put a renewed focus on that country as a growing missile and nuclear threat.

"With the defense spending target of more than 2 percent of GDP for NATO nations in mind, our country also aims to realize that the budget meets a level necessary to fundamentally reinforce defense capabilities in five years," the draft proposal said, referring to the numerical goal of North Atlantic Treaty Organization members.

Minoru Kihara, a member of the commission, told reporters after the meeting that the defense spending equal to 2 percent of the GDP is "not a goal but an indicator" for raising the budget. "We are not a NATO member, but many Western nations have set (the figure) as a target, and we should take that into account when increasing the budget," he said.

Japan's defense budget for the current fiscal year to March 2023 totaled 5.4 trillion yen ($42 billion), marking a record high for the eighth year in a row and up 1.1 percent from the previous year's initial budget. The budget has grown for 10 years in a row.

"Most Japanese citizens are not hoping Japan will conduct preemptive attacks," said former Defense Minister Itsunori Onodera, who heads the commission, adding that the new description was chosen for its "simplicity."

With the military buildup of Beijing and nuclear and missile threats by Pyongyang in mind, the draft proposal was compiled on the assumption that it is hard to intercept missiles amid the rapid advancement of technology, and the current missile defense system could be insufficient to defend the nation.

The draft proposal said the Japan-U.S. role-sharing, in which U.S. forces serve as a deterrent against potential enemies, should be maintained within the bounds of Japan's Constitution and international law and "under the concept of its exclusively defense-oriented policy."

Along with the National Security Strategy, the government plans to review two other key documents on defense by the year-end.