Japan shifts to hard-line stance on territorial dispute with Russia

Tokyo has switched to a hard-line stance in its decades-long territorial dispute with Moscow following Russia's invasion of Ukraine, stating in its annual foreign policy report released Friday that four northern islands are "illegally occupied" by Russia.

The 2022 Diplomatic Bluebook maintained the view from last year on China, saying its increasing military activities have become "a source of strong concern from the aspect of security for the international community and regions including Japan."

The report highlighted Tokyo's departure from a conciliatory approach toward Russia, with the "illegally occupied" wording on the status of the islands, off Japan's northernmost main island of Hokkaido, appearing for the first time since the 2003 report. 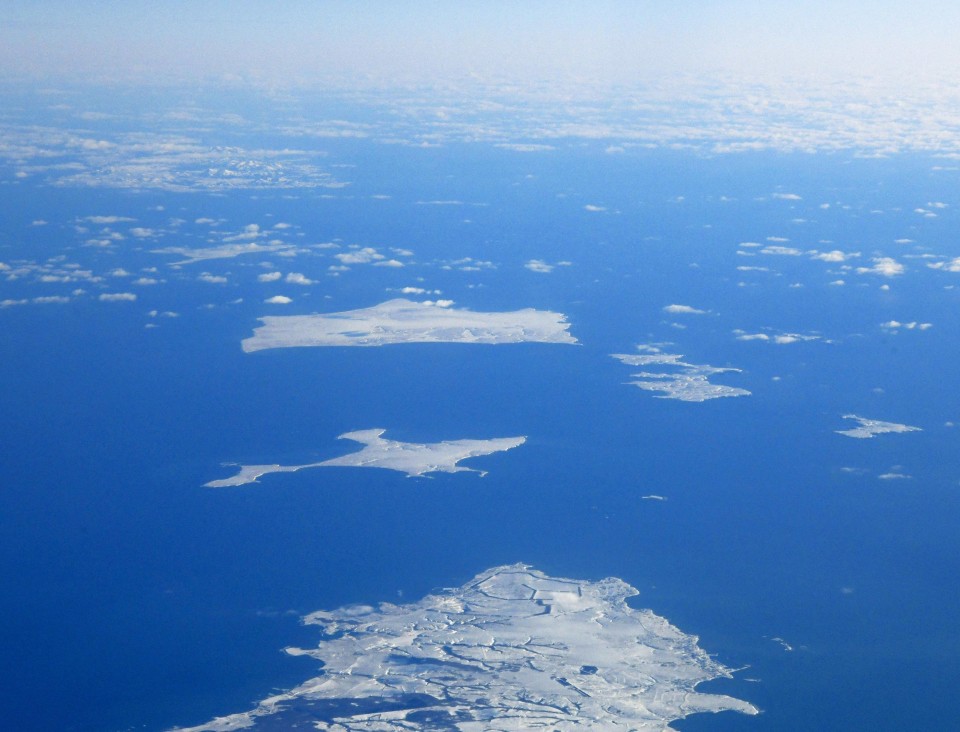 Photo taken Jan. 30, 2019, from a Kyodo News airplane shows Russian-held, Japanese-claimed islands off Japan's northernmost main island of Hokkaido. At the bottom is Cape Nosappu in Hokkaido, and in the center is the Habomai islet group. (Kyodo) ==Kyodo

The dispute over the islands -- Etorofu, Kunashiri, Shikotan and the Habomai islet group -- stems from their seizure by the Soviet Union, Russia's predecessor state, in the weeks following Japan's World War II surrender on Aug. 15, 1945. It has prevented the two nations from signing a peace treaty.

The bluebook also said the islands, called the Southern Kurils in Russia and the Northern Territories in Japan, are an "inherent" part of the territory of Japan, a description that had been absent since the 2011 report.

"The Northern Territories are islands over which Japan has sovereignty, and are an inherent part of the territory of Japan, but now are illegally occupied by Russia," the bluebook said.

Calling the Russian invasion of Ukraine "an outrage that undermines the foundation of the international order not only in Europe but also in Asia," the report said the current circumstances leave the prospects for an outcome in the territorial talks uncertain.

The Japanese government strongly demands that Russia heed the criticism of the international community, withdraw its troops from Ukraine and comply with international law, the report states. Japan has imposed economic sanctions in line with Western nations since the invasion began on Feb. 24.

The administration of former Prime Minister Shinzo Abe hoped that progress in negotiations on the territorial issue would lead to the return of some of the islands based on a 1956 bilateral treaty.

During his tenure from December 2012 to September 2020, Abe met with Russian President Vladimir Putin over 20 times without a breakthrough.

Under the 1956 pact, the Soviet Union agreed to return some of the islands upon the conclusion of a peace treaty.

Asked about the wording in the Japanese policy report, Kremlin spokesman Dmitry Peskov said the four islands are an "integral territory" of Russia, adding that continuing the peace treaty talks with Japan has become difficult due to Tokyo's "hostile actions" toward Moscow, according to Russia's Tass news agency.

In an overview of the global situation, the report said the world "has entered an age of U.S.-China competition," from the time in which Washington had supported the world's stability and prosperity through "overwhelming political, economic and military power," referring to enhanced presence of emerging and developing nations.

On relations with the United States, it said the Japan-U.S. alliance has become "stronger than ever before in history," as the two nations held eight summit and 15 foreign ministerial talks by the end of February after the launch of U.S. President Joe Biden's administration in 2021.

In descriptions of Asia, the report lists "China, Mongolia and others" before "Korean Peninsula" for the first time since the 2002 edition, displaying the government's strong interest in China's growing clout in the region.

It said Beijing's "unilateral attempts to change the status quo" in waters near the Japanese-controlled, Chinese-claimed Senkaku Islands in the East China Sea are "completely unacceptable."

It condemned North Korea's missile launches as "absolutely unacceptable," saying the country has been firing missiles "at an extremely high frequency and in new forms" since the beginning of this year, including its first launch of an intercontinental ballistic missile in March since November 2017.

On South Korea, the document said its relations with Japan are in a "very severe situation," citing conflicting issues over compensation for women coerced into working in military brothels and wartime laborers.

Although last year's report said the situation had "remained unacceptable to Japan," the latest one did not use such wording and instead said such a state "cannot be left untouched as it is."

The apparent softened stance came after the country's main opposition candidate Yoon Suk Yeol was elected in March as the next president, with the conservative president-elect seen as willing to improve soured bilateral ties.