Once declared to be squatters in a ruling by the nation's top court, descendants of wartime Korean laborers in western Japan opened a museum Saturday, aiming to celebrate the civic collaboration that eventually secured their right of abode.

The Utoro Peace Memorial Museum, located in Kyoto Prefecture's Uji, chronicles 77 years of struggle, starting with the first generation of Korean residents there who chose to stay in Japan at the end of World War II, partly because of the difficulties of returning to the Korean Peninsula. They had been involved in building an airfield when the war came to a close in 1945, but Japan's defeat stopped construction. 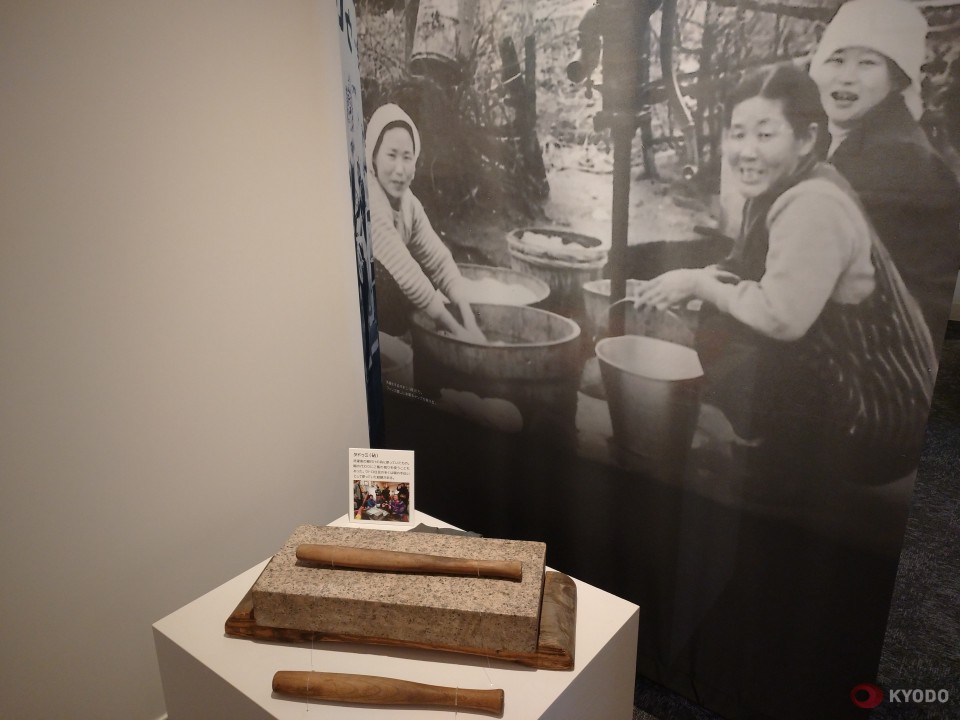 An estimated 1,300 workers from the peninsula, then under Japanese rule, were engaged in the construction of the airfield, according to the operator of the three-storied museum.

Often facing discrimination in Japanese society, those who continued living in bunkhouses for Korean airfield laborers formed a community that became known as Utoro. Residents supported each other in the years after the war, and with cheaper rents, the neighborhood also attracted Koreans from other parts of Japan.

But while the nation overall quickly recovered from the war's destruction, Utoro households went entirely without water due to the lack of legal land ownership until 1988, when Uji city authorities finally laid water pipes after obtaining approval from the landowner at the time.

Despite the lack of such a basic utility, which forced them to draw water from wells, the residents were allowed to continue living in the community for decades. They built houses and raised children who then started families of their own in Utoro.

But their life was upended when a real estate firm in Osaka Prefecture, which had obtained the legal ownership of Utoro's land, filed a lawsuit with the Kyoto District Court in February 1989, demanding the residents vacate the 2-hectare plot and their houses.

The real estate firm had purchased the land from Nissan Shatai Co., a member of the Nissan Motor group, which manufactured aircraft during the war and had been the owner of the Utoro property.

Facing the threat of eviction, the residents sent representatives to the United States while placing an ad in The New York Times to appeal for support in protecting their homes. The residents thought support from American consumers could sway Nissan, which they said had ignored their request for negotiations.

As the plight of the Utoro community became more widely known to surrounding Japanese neighborhoods through the lawsuit, a group of Japanese citizens in Kyoto Prefecture, including scholars, formed the Association to Protect Utoro in March 1989. 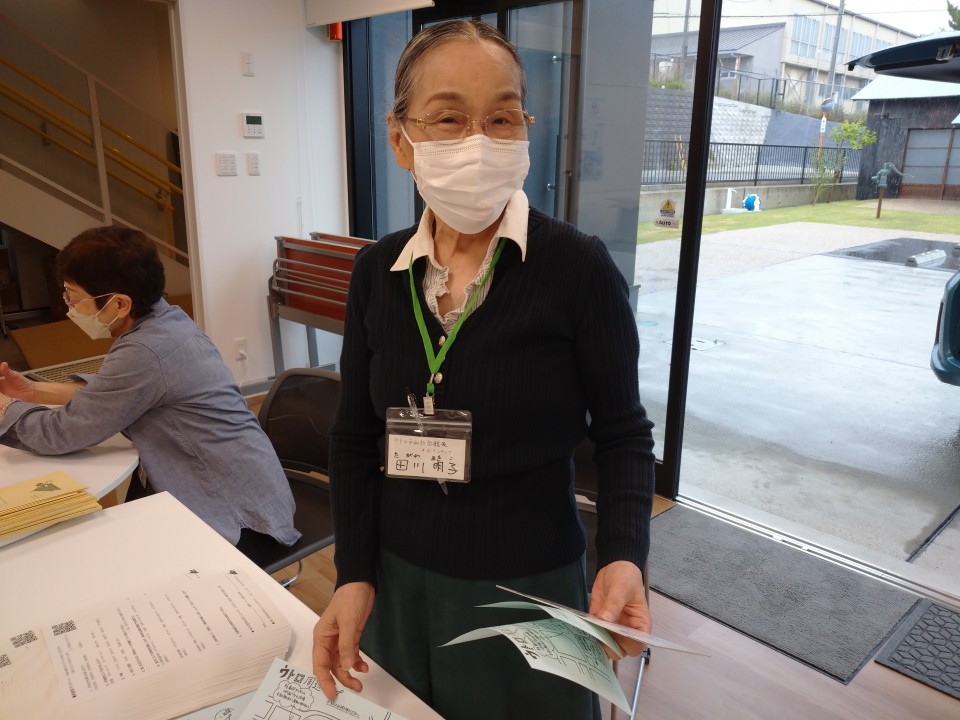 Akiko Tagawa, the current leader of the association, said she started helping people of Utoro after becoming acquainted with a woman from the community who was the same age as her.

"She told me there was no running water or sewage and she could see the stars in the sky at night from inside her house" through gaps in the roof, said Tagawa, also director of the museum. "I was shocked at how different it was from the environment I grew up in."

The legal battle dragged on until November 2000, when the Supreme Court upheld lower court rulings in favor of the real estate developer, giving the green light to the eviction of all Utoro households.

As Japan's local and central governments stood by, remaining uninterested in the dispute, it was the United Nations that actively supported the Utoro community.

In July 2005, the U.N. special rapporteur on racism, Doudou Diene, visited the community to witness the precarious conditions in which the ethnic Koreans lived, and met elderly first-generation residents who told him about their fear of losing a place to live.

In a report on his visit to Japan to the U.N. Economic and Social Council, the Senegalese jurist wrote that sanitary conditions in Utoro were "deplorable," with many families still having no running water and there being no sewage pipes, while residents suffered from frequent floods and sewage reflux.

"The poor existing basic infrastructures were built by the inhabitants: public authorities never came to this area," he said.

Lamenting that the Koreans lived under the constant threat of eviction, the U.N. special rapporteur called on the Japanese government to take immediate action to save them from becoming homeless.

Support also grew notably in South Korea. A South Korean NGO sent a fact-finding team to Utoro. Citizens raised funds to help Utoro residents purchase the land on which they lived. In December 2007, the country's National Assembly approved 3 billion won of public funds to be spent on Utoro residents. 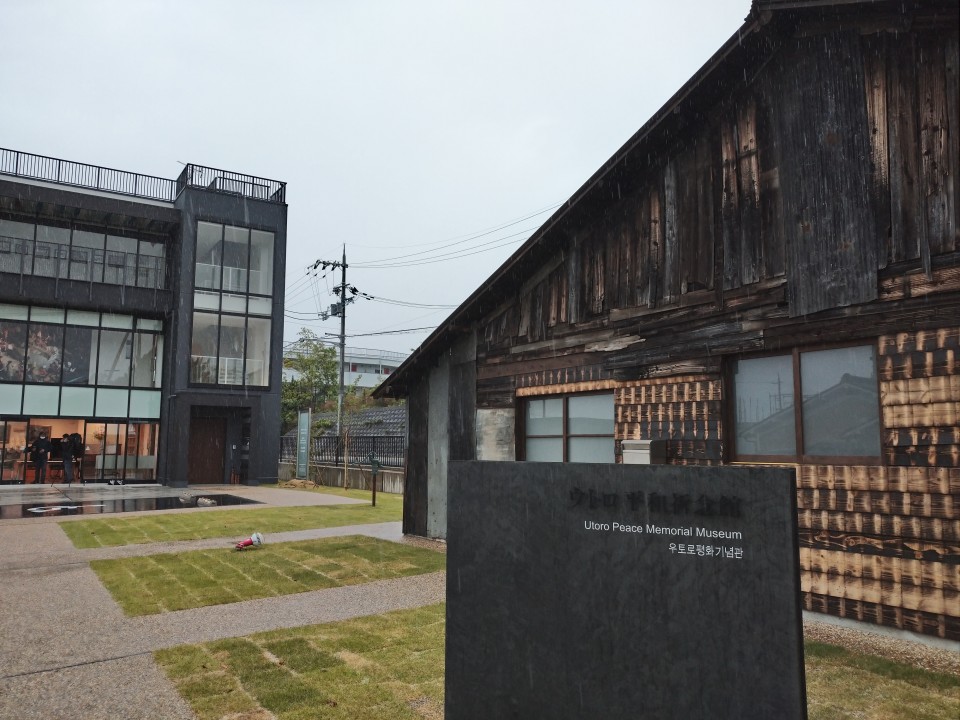 Photo taken April 29, 2022, shows a bunkhouse (R) for wartime Korean laborers working at an airfield in Kyoto Prefecture. It stands outside the Utoro Peace Memorial Museum (back). (Kyodo)

The residents later agreed with the central and local governments to tear down their houses so that public housing could be built, and implementing a range of works to improve the local living environment. The museum, built entirely with donations, is part of an ongoing plan being promoted by the city of Uji and the residents to better the living climate.

In January 2018, the phase-one construction of public housing was completed and 40 Korean households moved into the brand-new building.

But just when a bright new chapter seemed to have opened for Utoro, the community was hit by an arson attack in August 2021. Although no one was injured, the fire gutted or damaged seven buildings. About 40 signs that used to stand on Utoro streets, which were to be on display at the museum, were also burned down.

A 22-year-old Japanese man indicted over the attack last December later told Kyodo News in written correspondence that he committed the crime in order to draw attention to what he called the residents' "illegal land occupation," despite the fact the residents were now the legal landowners.

The museum exhibits old household items used by the residents as well as photos and videos. Outside the museum stands an old wooden house that is the only surviving bunkhouse from the wartime period, showing visitors how the Korean laborers used to live.

It also has a multipurpose hall and an outdoor exhibition space where various events can be held to promote exchanges between visitors and local residents.

"Utoro is a town created by war, but this museum is a place to pray for peace. I hope many Japanese, especially young people, will visit," Tagawa said.

Since the arson attack forced the museum operator to enhance security measures, it is soliciting additional donations from the public. 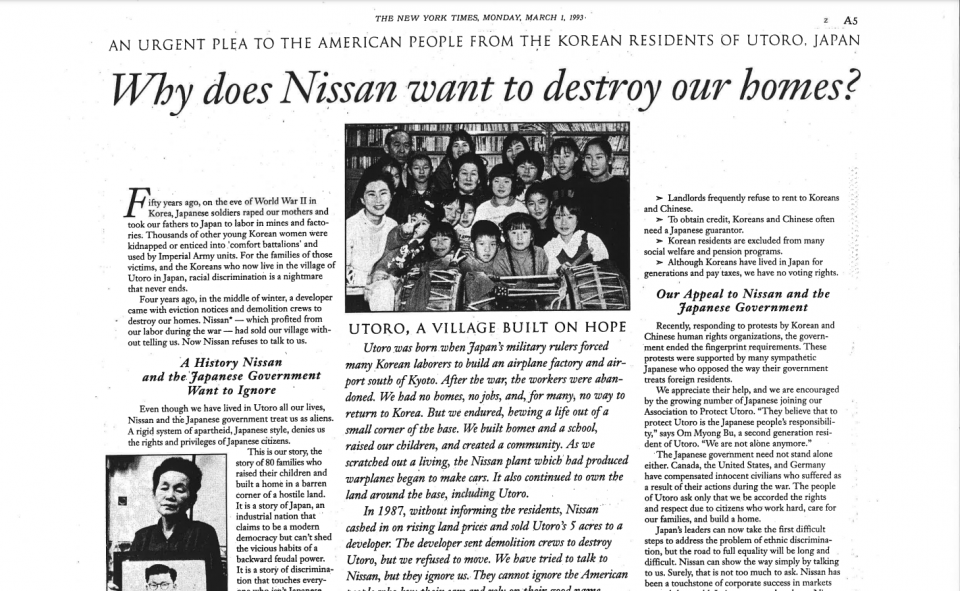 Photo shows top half of an opinion ad placed by Utoro residents in the New York Times in March 1993. (Photo courtesy of Utoro Peace Memorial Museum)(Kyodo)

The following is a chronology of key events in the history of Utoro, a community of ethnic Koreans in Uji, Kyoto Prefecture in western Japan.

Around 1943 -- Bunkhouses built in the current Utoro quarter for Korean workers constructing an airfield.

1988 -- Waterworks system installed in Utoro. Until then, residents had to draw water from wells. 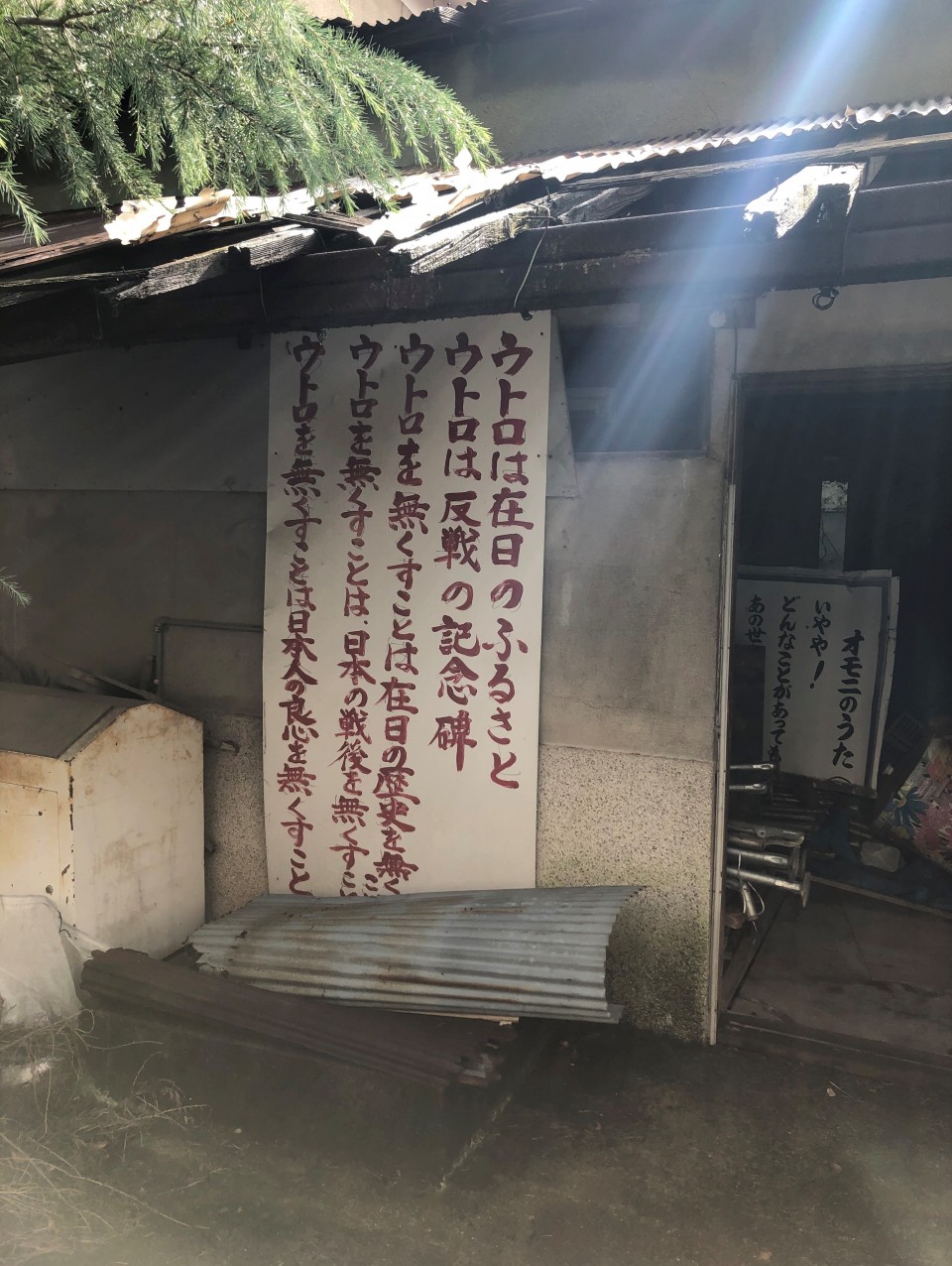 Photo shows a sign bearing slogans that used to be on display in the Utoro community of ethnic Koreans in Uji, Kyoto Prefecture in western Japan. One of the slogans says, "To lose Utoro is to lose the conscience of the Japanese people." (Photo courtesy of Ku Ryang Ok)(Kyodo)

2010 and 2011 -- Using donations from Korean residents, Japanese and South Korean citizens and the South Korean government, about a third of Utoro land is purchased from the real estate firm.

Aug. 2021 -- Utoro hit by arson attack. No one injured but fire guts or damages seven buildings.