The United Nations on Thursday suspended Russia from the Human Rights Council amid international condemnation over the brutal killings of civilians in Ukraine by Russian soldiers, making Moscow the first among permanent members of the Security Council to be excluded from the panel.

During a special session of the General Assembly, a resolution demanding the suspension of Russia's membership in the council was approved by majority vote.

U.S. President Joe Biden hailed the decision, saying in a statement, "This is a meaningful step by the international community further demonstrating how (Russian President Vladimir) Putin's war has made Russia an international pariah." 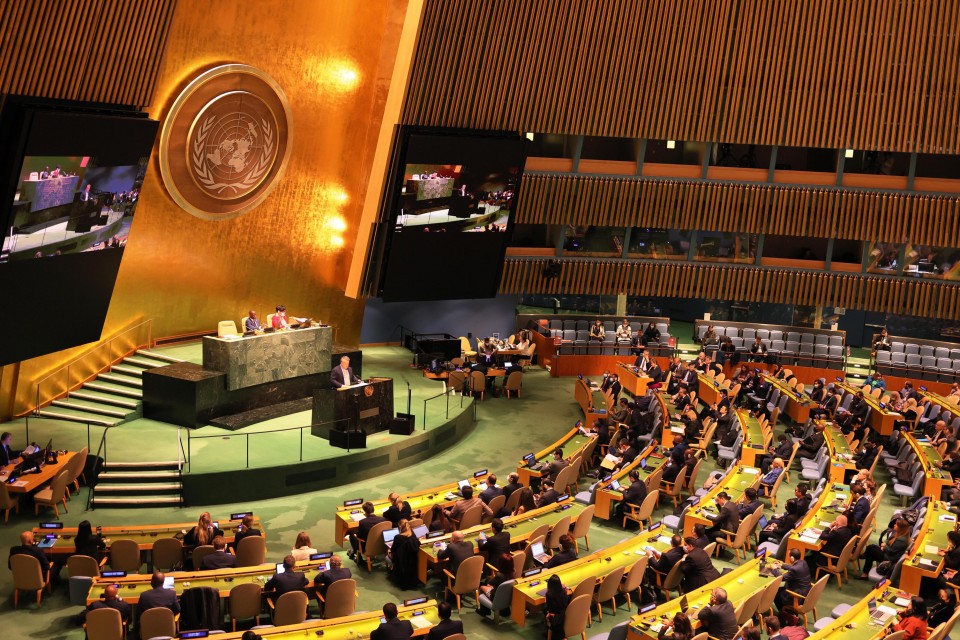 Sergiy Kyslytsya, permanent representative of Ukraine to the United Nations, speaks as members of the U.N. General Assembly meet for a special session on the Russian invasion of Ukraine on April 7, 2022, in New York. (Getty/Kyodo)

In light of Russia's systemic violations of human rights and its forces' involvement in war crimes, Biden said, "Russia has no place on the Human Rights Council," a position he accused Moscow of abusing to "spread its disinformation" about the conflict.

"Russia's lies are no match for the undeniable evidence of what is happening in Ukraine," he added.

Following the vote, Russia's Foreign Ministry said the country is halting its activity in the council the same day. In a statement, the ministry rapped the decision as politically-motivated and illegitimate.

Asserting that the council is dominated by member states implicated in severe human rights violations, Russia argued in its statement that it would be meaningless for Moscow to remain on the council as currently organized, apparently indirectly criticizing the United States and others.

While 93 countries including Japan, Britain and the United States backed the resolution, 24 countries such as China, North Korea and Russia voted against it.

An additional 58 countries including India abstained from voting, suggesting the international body has failed to demonstrate strong unity in expelling Russia from the council over its suspected involvement in war crimes in Ukraine.

In contrast, around 140 countries supported two earlier resolutions in General Assembly votes in March -- one condemning Russia's invasion of Ukraine and another calling for an improvement of the humanitarian situation resulting from the military aggression.

Prior to Russia, Libya had been the only country suspended from the council. It was ousted over a crackdown by its forces on anti-government protesters in 2011.

The latest resolution expressed "grave concern" over reports of "gross and systematic violations and abuses of human rights."

Following reports that hundreds of civilian bodies have been found in the suburbs of the capital Kyiv, Western countries and others are intensifying their criticism of Russia, which launched its military campaign against Ukraine on Feb. 24. The international response to the latest incident has included further economic sanctions against Moscow.

Russia has denied any involvement in the brutal killings of civilians in Ukraine. Among major economies, China has refrained from accusing Moscow over the war in Ukraine, even after evidence of many civilian deaths near Kiev came to light.

Also on Thursday, leaders from the Group of Seven industrialized countries issued a statement condemning the killing of civilians and noncombatants in Bucha and other Ukrainian towns and supporting a call by U.N. Secretary General Antonio Guterres for an "independent investigation" into the deaths to hold Russia accountable.

"We underscore that those responsible for war crimes and violations of international humanitarian law, including the indiscriminate use of force or attacks intentionally targeting civilians, must be held accountable and brought to justice," the G-7 statement said.

The Human Rights Council includes 47 member states elected to three-year terms. Russia's current membership was set to expire at the end of 2023.

U.N. assembly calls for protection of civilians in war-torn Ukraine