About 373 million people in 45 cities across China have come under some form of lockdown due to a surge in coronavirus cases amid the spread of the highly contagious Omicron variant, according to estimates by a Nomura Holdings Inc. unit.

The figure amounts to 26.4 percent of the total population, as the government in Beijing continues to pursue a radical zero-COVID policy, fueling concerns that stringent measures could negatively affect the world's second-largest economy and the global supply chain. 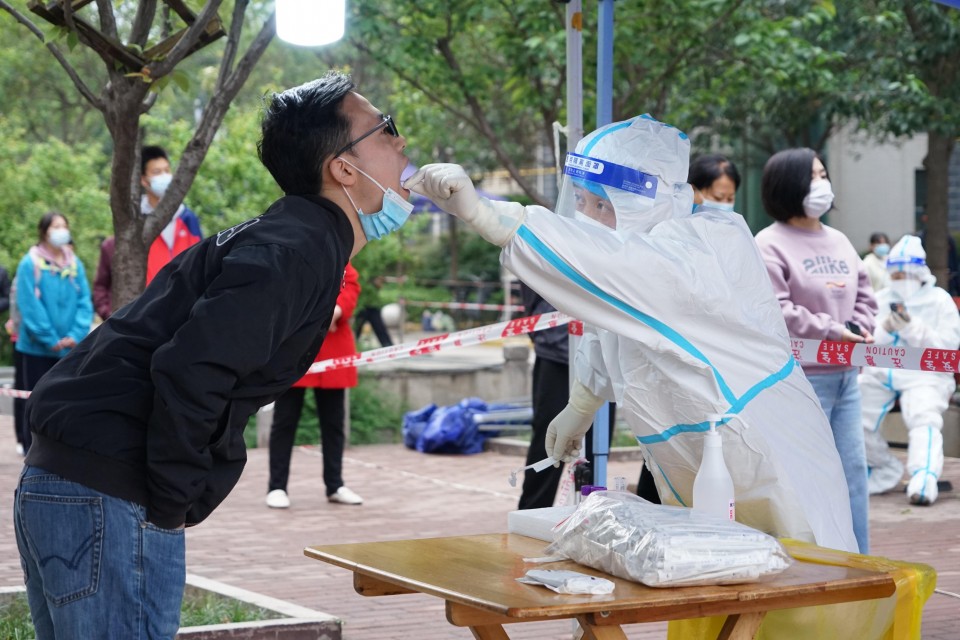 A medical worker gives a nucleic acid test to a citizen in a community in Xian, China, on April 16, 2022. (Costfoto/Future Publishing/Getty/Kyodo)

In China's financial and commercial hub of Shanghai, many parts of which have been locked down since March 28, the number of infections between the start of the measure and Friday totaled 314,000.

According to Nomura International (Hong Kong) Ltd., complete or partial lockdowns had been implemented in the 45 Chinese cities as of Monday, up from 23 cities with a total population of 193 million a week earlier.

The 45 cities' combined annual gross domestic product amounts to some 46 trillion yuan ($7.2 trillion), or 40.3 percent of the country's economy.

In the areas under lockdowns, residents have seen their movements restricted, with public transportation, such as buses and subways, halted. In Shanghai, videos of scuffles between police and residents, frustrated with the strict isolation policy, went viral at one point, but they were later deleted.

The Japanese Consulate General in Shanghai said it has appealed on behalf of the plight of some 11,000 Japanese companies based in the city in a letter sent to the municipal government, saying the lockdown has "severely impacted" their operations and uncertainties over the measure have "greatly restricted" their activities.

The city of Xian has imposed steps to restrict the movement of its 13 million residents through next Tuesday after 43 infections were confirmed as of Friday, with commercial facilities asked to shut down.

China faces its toughest fight against the spread of the virus since the initial outbreak in the central city of Wuhan more than two years ago.