Shanghai will remain under lockdown as it needs to analyze results of mass testing for the coronavirus conducted Monday, local authorities said, amid a rapid acceleration of infections.

China has sent about 2,000 military medical staff and thousands of additional health care workers to Shanghai, official media said, as the number of new COVID-19 cases confirmed in the country's most important financial center hit a record high for the third straight day. 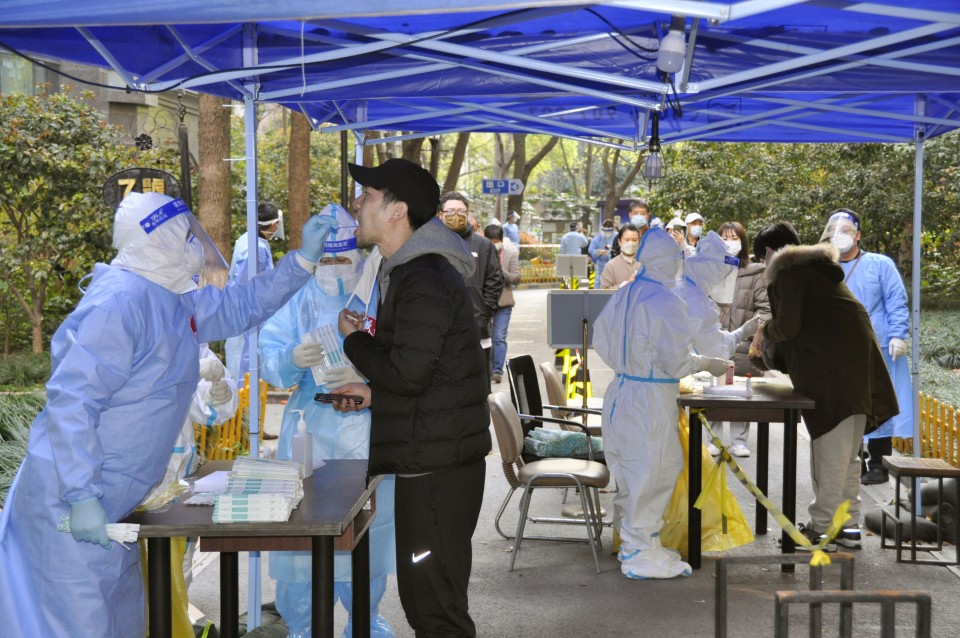 People take PCR tests for the novel coronavirus in Shanghai on April 4, 2022, as a lockdown continues in the city to curb COVID-19 infections. (Kyodo) ==Kyodo

Chinese health authorities said Monday that 13,137 new cases were reported nationwide in the previous 24 hours, of which 9,006, mostly asymptomatic, were confirmed in the megacity of 26 million people that began a two-stage lockdown on March 28, first in its eastern districts.

Lockdown measures later imposed on Shanghai's western areas were initially due to be lifted at 3 a.m. on Tuesday, but the city government said the curbs requiring people to stay at home will continue to be "strictly" implemented, "except for medical treatment," until all necessary work for the testing is completed.

Major parts of Shanghai's eastern side also remain under lockdown even after its initial end on Friday.

The medical personnel from various units affiliated with the People's Liberation Army were dispatched Sunday to the city as the outbreak, driven by the highly transmissible BA.2 Omicron subvariant of the virus, is challenging China's stringent "zero COVID" policy.

Still small by global standards, many officials seem to believe no optimism is warranted due to increasing infections in the populous city, while many residents brace for the lockdown to last for a while.

In addition to the personnel from the PLA's army, navy and joint logistics forces, Shanghai received Monday more than 20,000 medics from across the country for its toughest fight against the spread of the virus since the initial outbreak in Wuhan more than two years ago, the official China Daily reported on its website.