East Japan Railway Co. on Monday resumed bullet train services between Iwate and Miyagi prefectures that were suspended after a powerful earthquake hit northeastern Japan more than two weeks ago.

The trains will operate at a reduced speed of up to 160 kilometers per hour and the number of services will be kept at around 60 percent of normal times, according to the company, also known as JR East. 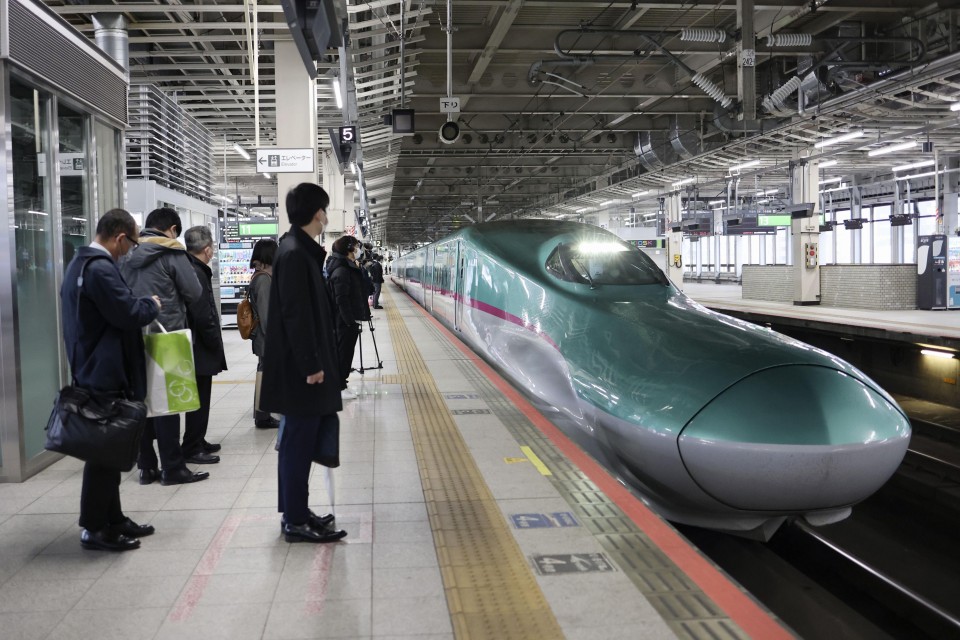 A Tohoku Shinkansen bullet train arrives in Sendai Station in Sendai, Miyagi Prefecture, on April 4, 2022. It is the first bullet train to run between Sendai and Ichinoseki, Iwate Prefecture, since services were suspended following an M7.4 quake on March 16. (Kyodo)

The M7.4 quake on March 16 derailed a Tohoku Shinkansen bullet train in Shiroishi, Miyagi, causing suspension of services in areas stretching from Tochigi Prefecture, north of Tokyo, to Iwate Prefecture. JR East has gradually restored its services in the affected areas, aiming to start operating the entire line around April 20.

The temblor left three people dead and more than 200 injured across more than 10 prefectures.

At Sendai Station around 6:30 a.m. Monday, many passengers, including those commuting to work, were seen hastily boarding the first bullet train departing for Iwate after the suspension ended.

Hiroyuki Takasawa, a 64-year-old resident of Sendai who was on his way to his workplace in Morioka, Iwate, welcomed the resumption.

He said he had been forced to take a bus to Morioka during the suspension and had to stay at a hotel in the city on weekdays.

"It's been a long time (to have life disrupted)," he said.

JR East said recovery efforts are under way at the scene of the derailment, with workers hurrying to restore damaged infrastructure, including rail tracks.

The derailed train has been already removed from the site of the accident and is expected to be transported to a JR East facility in Miyagi soon, according to the company.

JR East plans to resume bullet train services between Sendai and Fukushima stations, the only stretch of the line on which operations are still suspended, around April 20, connecting the two ends of the Tohoku Shinkansen line, Tokyo and Shin-Aomori, for the first time since the quake.