The United States on Thursday announced plans for its largest-ever release of emergency oil reserves in an effort to address rising energy prices amid Russia's war in Ukraine, vowing to put 1 million barrels on the market per day for the next six months.

President Joe Biden is coordinating the action with allies and partners around the world, and other countries are expected to follow suit, bringing the total release to "well over" an average of 1 million barrels per day, according to the White House. 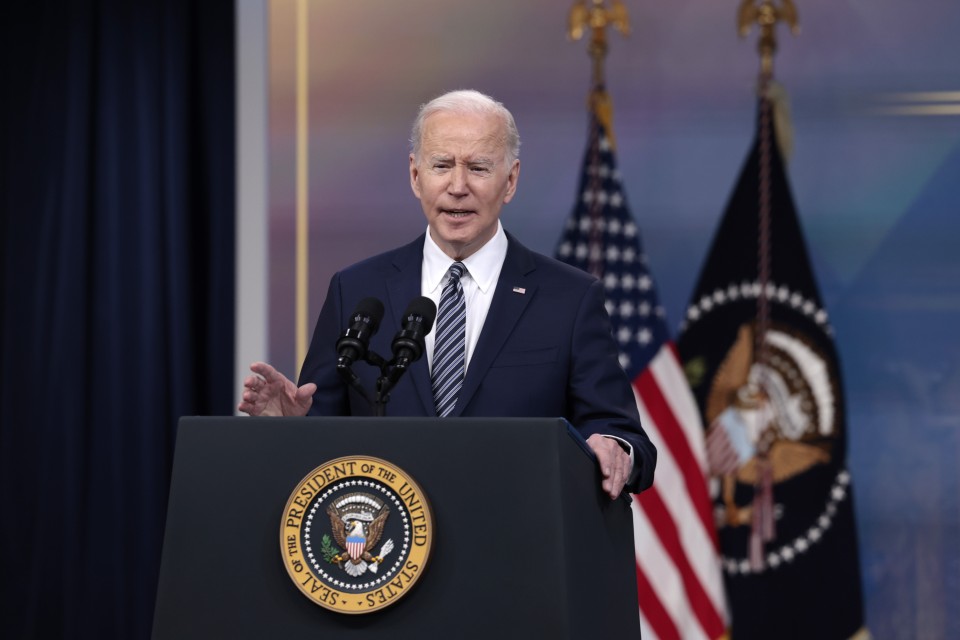 U.S. President Joe Biden delivers remarks on gas prices in the United States from the South Court Auditorium of the White House on March 31, 2022 in Washington. (Getty/Kyodo)

The International Energy Agency has called an emergency meeting for Friday, raising the prospects of possible coordinated actions among its members.

The Paris-based organization, in which countries including the United States and Japan are members, decided in early March on a release of 60 million barrels of oil from emergency reserves to ensure the stability of oil markets.

According to the IEA, Russia is the world's third-largest oil producer and the largest exporter. Its exports of about 5 million barrels a day of crude oil represent roughly 12 percent of global trade, with around 60 percent of Russia's oil exports going to Europe and another 20 percent to China.

The latest U.S. decision came as the Biden administration has banned Russian oil and other energy imports to punish Moscow over its invasion of Ukraine, in addition to other sanctions, even at the risk of driving crude prices higher amid concerns over supply disruptions.

While insisting that the oil ban was "the right thing to do," Biden said his administration will seek to ease the burden households are facing due to higher gas prices by increasing oil supply "immediately" through the release from the U.S. Strategic Petroleum Reserve -- known as the world's largest supply of emergency crude oil -- and by encouraging domestic production.

"This record release will provide a historic amount of supply to serve as (a) bridge until the end of the year when domestic production ramps up," the White House said.

The Energy Department will use the revenue from the release to restock the Strategic Petroleum Reserve in future years.

It will be the third time in six months that the United States will release oil from its emergency reserves. The Biden administration previously committed to freeing up 30 million barrels for the coordinated effort agreed among the 31 members of the IEA on March 1.

But it remains to be seen whether the latest move will help tame gas prices, which have increased by around $1 per gallon from the start of this year to over $4.20. The United States consumed an average of nearly 20 million barrels of petroleum per day in 2021, according to government data.

Kevin McCarthy, Republican minority leader of the U.S. House of Representatives, criticized the Democratic president's decision, saying the emergency reserve is "already at a 20-year low."

To increase domestic oil production, the Biden administration said it will call on Congress to make companies pay fees on acres of unused public lands and idled wells on federal lands.

"This is...not the time to sit on record profits. It's time to step up for the good of your country, the good of the world, to invest in immediate production that we need to respond to (Russian President) Vladimir Putin, to provide some relief for your customers, not investors and executives," Biden said as he sought cooperation from U.S. energy companies.

Emphasizing the importance of shifting to clean energy and reducing dependence on countries including China for key materials necessary for the advancement of renewables, Biden said he will resort to wartime powers -- the Defense Production Act -- to boost domestic production of minerals used in large-capacity batteries needed for electric vehicles and storage of renewable energy.

Lithium, nickel, cobalt, graphite and manganese would be among such minerals.

Among the 21 entities and 13 individuals designated by the Treasury Department is Joint Stock Company Mikron, which it says is Russia's largest chipmaker and a manufacturer and exporter of microelectronics.

The sanctions block the assets held by the blacklisted individuals and companies within the United States and prohibit them from engaging in transactions with U.S. citizens.