The Tokyo Stock Exchange marked Friday its final trading day ahead of its reorganization on Monday, as the bourse endeavors to lure more foreign investors in its first major shakeup in over 60 years.

Japan's main bourse has seen the number of companies listed on the First Section more than quadruple from 495 to 2,177 since 1949 when it reopened under its present name after World War II. The current market structure came into being in 1961 with the creation of the Second Section.

"This is simply the start of our new vision," Hiromi Yamaji, the company's president and CEO, said in an interview this week.

The reform comes as Japan seeks to boost its global standing as a financial center by increasing its attractiveness to foreign investors through stricter screening of top-performing listed firms. 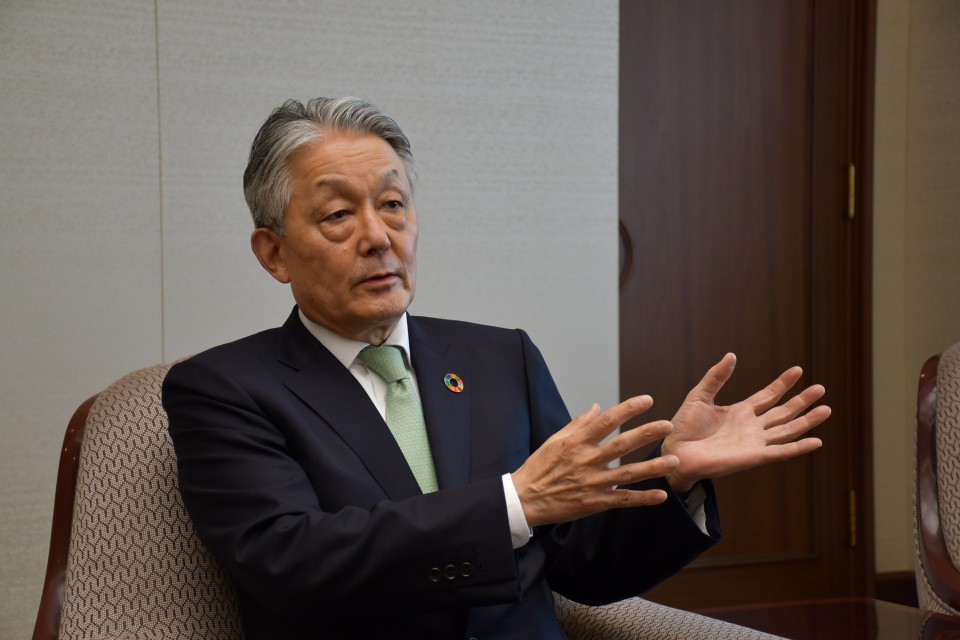 Hiromi Yamaji, president and CEO of Tokyo Stock Exchange Inc., speaks at an interview in Tokyo on March 30, 2022. (Kyodo)

The top-tier Prime section, equivalent to the current First Section, will have a greater focus on liquidity to attract various institutional investors.

The Standard section will be created through the merger of the Second Section and the Jasdaq market, mainly for midsize companies, while the Mothers market for up-and-coming companies will be renamed the Growth section.

However, the reorganization has garnered criticism from some foreign investors who say the shakeup is unlikely to lead to significant changes as the majority of firms are moving from the former First Section to the Prime section.

"The goal of the restructuring was to clarify the theme of each trading tier and encourage the steady growth of businesses," as opposed to whittling down the number of listed companies, Yamaji said.

To qualify to be on the Prime section, companies need to have at least 10 billion yen ($81.91 million) worth of floating shares, accounting for 35 percent or more of their outstanding shares in principle.

Those that failed to meet the benchmark, however, were able to submit a business plan demonstrating growth to meet the necessary standards.

As of Wednesday, a total of 1,839 firms, or around 84 percent, were slated to be placed on the highest trading tier out of the 2,177 now listed on the First Section.

As the bourse relies on foreign investors, Yamaji said it was paramount for Japanese businesses to engage with them by increasing English accessibility, noting that many firms could benefit by creating more English content for their websites and documents.

Approximately 60 percent of the daily trading volume on the Tokyo spot markets is currently made up of foreign investors, who boast an even higher share of around 75 percent in the derivatives markets, according to the chief executive.

Japan as a market holds many favorable qualities compared with some of its Asian counterparts, such as being a democracy and the third-largest economy in the world, as well as having the Financial Services Agency, which is known for its stability, as a supervisory agency, he added.