China's economy grew 4.8 percent from a year earlier during the January-March period, official data showed Monday, but the economic outlook has become dimmer due largely to the country's radical "zero COVID" policy.

The year-on-year gross domestic product figure was worse than the government's growth target of around 5 percent for this year, underscoring that the world's second-biggest economy has been slowing faster than expected.

The National Bureau of Statistics said China's economy "continued its momentum of recovery, performing within a reasonable range."

But it voiced wariness about the forecasts, saying, "We must be aware that with the domestic and international environment becoming increasingly complicated and uncertain, economic development is facing significant difficulties and challenges."

China's economic outlook has become cloudy as the authorities have implemented full or partial lockdowns in dozens of cities with the highly contagious Omicron variant spreading, hampering business activities. 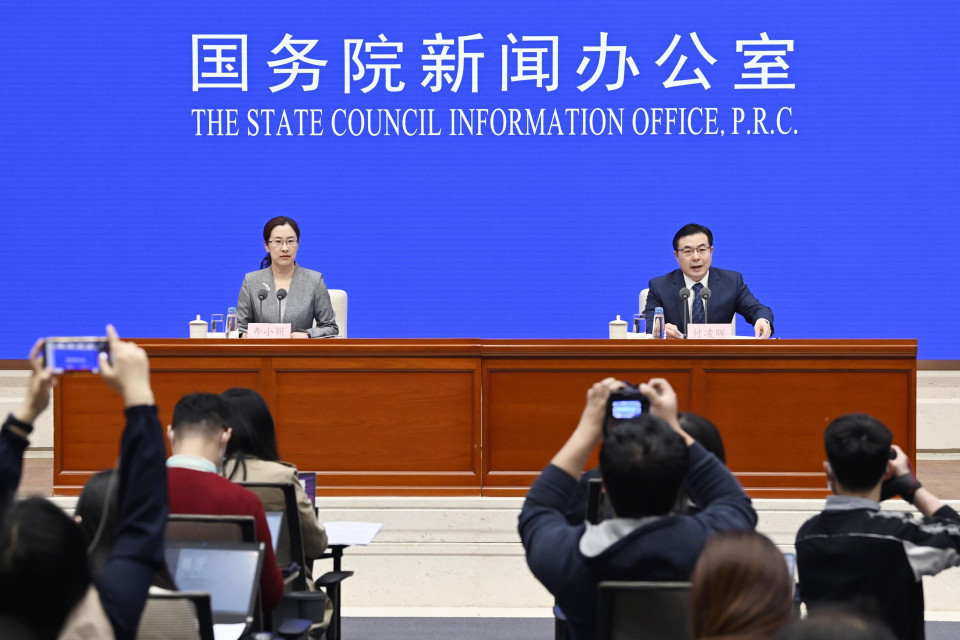 Officials of China's National Bureau of Statistics hold a press conference in Beijing on April 18, 2022. (Kyodo)

In late March, China decided to lock down its commercial center of Shanghai, which has a population of about 24.9 million, after sealing the southern technology hub of Shenzhen with 17 million people and Changchun in the northeast with 9 million.

Disruptions to the global supply chain from economic sanctions slapped by Western countries against Russia in the aftermath of its invasion of Ukraine may also deal a blow to the Chinese economy down the road.

China has been forced to suspend the full promotion of President Xi Jinping's ambitious "common prosperity" policy for the time being, a Chinese source familiar with the matter said Monday.

Last year, Xi promised to pursue common prosperity, aimed at reducing income gaps at home by levying more regulations on the nation's lucrative sectors including the IT and financial industries.

Xi's push to attain common prosperity has sparked fears that the most populous country would become a less attractive market, as the goal may place heavy burdens on the rich so that the government can coercively rectify economic inequality.

China was the only major economy to achieve growth in 2020. The economy expanded 8.1 percent from the previous year in 2021. In the October-December period alone, however, it grew a tepid 4.0 percent on year amid concern over another wave of coronavirus infections.

In an update of its World Economic Outlook report released in January, the International Monetary Fund said China's economic growth is estimated to slow to 4.8 percent this year as the government's efforts to curb the virus might dampen consumption.

Nevertheless, China has expressed resolve to continue its zero COVID policy, such as imposing lockdowns on cities when outbreaks occur and quarantines on travelers from abroad, even following the end of the Beijing Winter Olympics and Paralympics earlier this year.

Chinese Premier Li Keqiang has said that the nation's anti-epidemic steps have helped ensure "the health and safety of the people and maintained normal order in work and life."

After this year's seven-day parliamentary session in March, meanwhile, Li said that it is "not easy" to accomplish the GDP growth goal for 2022, pledging to implement policy measures that would generate more jobs to prevent a sharp downturn in the economy.

In China, speculation is rife that the ruling Communist Party will not ease the enforcement of the zero COVID policy until the end of its twice-a-decade congress in the fall, at which Xi is set to secure a controversial third term as leader.

Rather than relaxing regulations, Xi's leadership could tighten them to trumpet its achievements in bringing the coronavirus under control, some foreign affairs experts said.

Many Chinese citizens are believed to be frustrated by the all-encompassing constraints, now in place for more than two years. People infected with the Omicron variant are mostly asymptomatic or exhibit only mild symptoms.