The first day of trading following the overhaul ended without confusion. However, trading volume was thin as some investors apparently refrained from making big moves due to caution over possible system glitches caused by the transition.

The Prime, Standard and Growth markets replace the four sections formerly on the Tokyo bourse, as the operator has tried to create a clearer concept for each segment and revitalize a market that has fallen far behind U.S. peers in terms of capitalization. 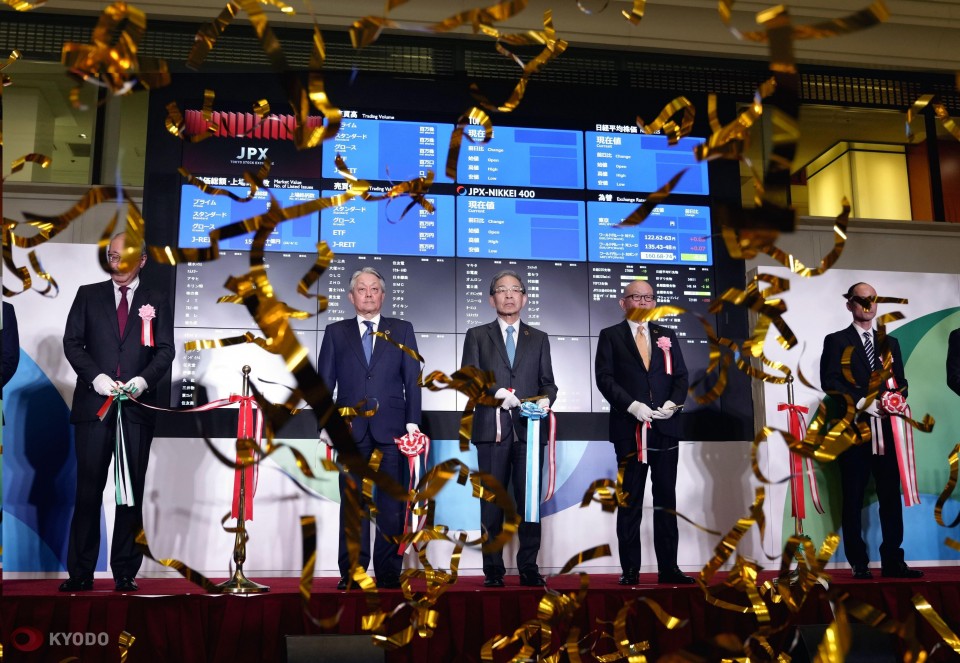 A ceremony is held at the Tokyo Stock Exchange to mark the reorganization of the market into three trading segments on April 4, 2022, a major reform aimed at imposing stricter listing standards and attracting more foreign investment. (Kyodo) ==Kyodo

By tightening standards on trading liquidity and corporate governance, Tokyo Stock Exchange Inc. hopes the top-tier Prime Market will lure more foreign investors, who made up about 70 percent of the trading value on the former First Section.

But investors and market observers expect the overhaul to create little change as over 80 percent of the roughly 2,100 issues on the First Section slid over to the Prime segment. Some investors said that the restructuring was more cosmetic than actual reform.

The reorganization is the biggest change to the core structure of the Tokyo bourse since 1961, when the First and Second sections were created to accommodate the growing number of listed companies during Japan's period of rapid economic expansion.

The new top-tier consists of 1,839 of the 3,771 listed companies on the bourse, including global names such as Toyota Motor Corp. and Sony Group Corp. The Standard Market for midsize firms and the Growth Market for up-and-comers consist of 1,466 and 466 firms, respectively.

"From today, I believe that 3,771 listed companies will begin new initiatives to grow consistently and improve their corporate value," Akira Kiyota, the chief executive of Japan Exchange Group Inc., the parent of the TSE, said at a ribbon-cutting ceremony held ahead of the start of trading.

But the Nikkei Stock Average, consisting of 225 issues in the Prime section, logged the smallest intraday movement of the year before finishing 0.25 percent higher at 27,736.47. The total trade volume of the TSE was about 20 percent lower than the average daily volume between January and February.

The bourse operator requires companies in the Prime segment to have a share float worth at least 10 billion yen ($82 million) that accounts for 35 percent or more of its outstanding shares.

The operator also calls on companies to improve corporate governance, including having outside directors make up one-third of board members and enhancing transparency by offering information to investors in English.

Of the firms in the Prime segment, 295 firms, or 16 percent, did not meet the requirements for the category but still earned a spot after submitting business plans laying out how they can meet the criteria.

The TSE has not set a concrete deadline for these companies to achieve this, adding to concerns over the effectiveness of the reorganization.

"The reorganization itself is unlikely to lead to a drastic rise in corporate performance or the evaluation of stocks," said Maki Sawada, a strategist in Nomura Securities Co.'s investment content department. "It is a first whereby the (TSE) is starting to emphasize the importance of corporate governance," she said.

The TSE will also reorganize the Topix stock index, representing all shares on the former First Section, in stages starting in October. It will eliminate in 2025 issues that do not meet its standards.

The operator launched discussions in 2018 about possibly reorganizing its market structure as there were overlaps between sections, including the Jasdaq and Mothers, which both included small-cap companies. There were also concerns that the First Section had too many smaller companies.

The revamp comes as Japan is seeking to boost its global standing. The Tokyo bourse had a capitalization of shares worth $6.17 trillion as of February, placing it fifth in the world behind markets such as the New York Stock Exchange and the U.S. Nasdaq, according to data from the World Federation of Exchanges.

In 1989, Tokyo briefly surpassed the New York bourse as the largest bourse in the world in terms of capitalization, calculated using the foreign exchange rate at the time. The benchmark Nikkei stock index posted its record-high that year when Japan was in the midst of its asset-inflated bubble economy.

Shanghai is now the largest bourse in Asia, while other Asian markets are also growing, the federation's data showed.

Joining the ceremony at the exchange, Masahiro Okafuji, chairman and CEO of major trading house Itochu Corp., expressed hopes that the reshuffling will help the Japanese market garner more attention from the world.

"I hope the new market will see each listed firm competing to improve corporate value, and investors from Japan and abroad evaluating the potential and attraction of each company fairly," said Okafuji, whose company is part of the Prime division.