The Bank of Japan's steadfast commitment to a loose monetary policy coupled with the authorities' inability to stem the yen's slide could send the Japanese currency to its weakest level in more than 20 years against the U.S. dollar.

Falling below 130 yen against the dollar Thursday after the central bank left its ultraeasy monetary policy unchanged, market analysts expect the yen to test the downside toward 135.15, a level not seen since Jan. 31, 2002. Once this support is breached, the next downside target is expected at 136.05, set in October 1998.

The yen has fallen about 15 yen, or 13 percent, to 20-year lows against the greenback since early March. A weaker yen traditionally benefits Japan's export-oriented economy. However, it is now hurting the resource-scarce country, battling surging energy and commodity prices. 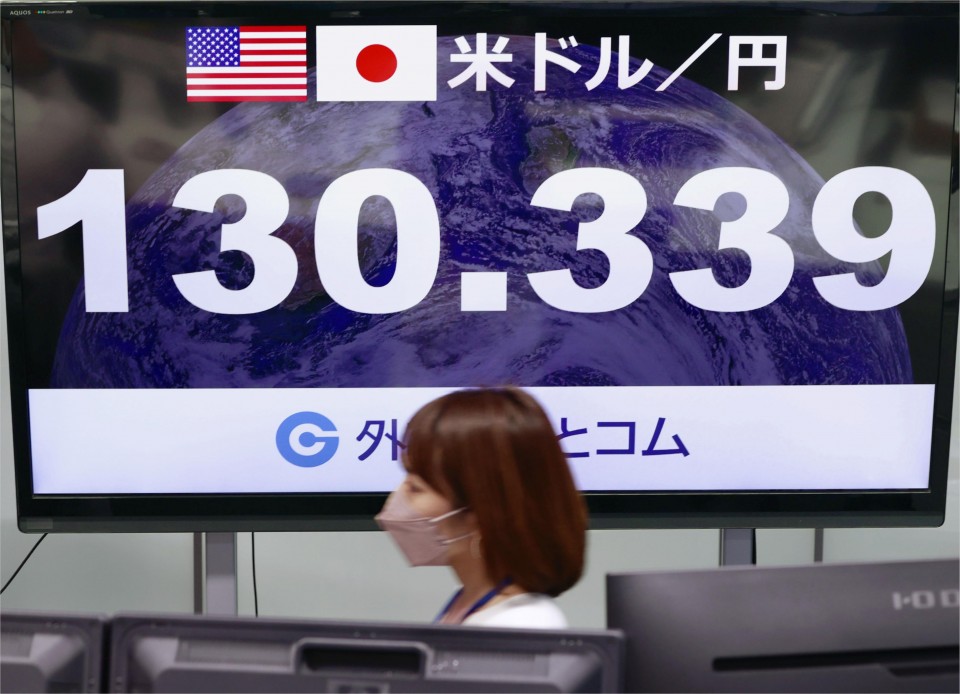 A financial monitor at a currency dealing house in Tokyo shows the Japanese yen tumbling below 130 to a fresh 20-year low against the U.S. dollar on April 28, 2022. (Kyodo) ==Kyodo

The weakening of the Japanese currency reflects the view among market participants that the BOJ will lag central banks in other major economies in normalizing monetary policy.

The BOJ also said after its regular two-day meeting that ended Thursday that it will carry out a fixed-rate government bond-buying operation "every business day" to stem a rise in the benchmark 10-year yield above its allowed limit.

In contrast, the U.S. Federal Reserve is expected to raise interest rates by 0.5 percentage point at its upcoming May 3-4 meeting. The incremental jump would be larger than the central bank's typical quarter-point increase as it tries to stem the fastest inflation the nation has seen in more than 40 years.

"The quickest way to stop the yen's fall is for the BOJ to normalize its monetary policy or for the (Fed) not to pursue interest rate hikes -- both of which are unrealistic at the moment," said Takuya Kanda, senior researcher at Gaitame.com Research Institute.

Demand for the currency of a country offering higher bond yields is often stronger. The yield on Japan's benchmark 10-year government bonds has stayed around 0.25 percent recently, compared to close to 3 percent for the 10-year U.S. Treasury yield as the policies of the Japanese and U.S. central banks continue to diverge.

The BOJ aims to attain its 2 percent inflation target through its easing policy. Governor Haruhiko Kuroda has reiterated that the bank needs to continue the nearly decade-old policy, as the inflation seen in Japan has come from surging raw material prices and lacks sustainability.

"Many investors have priced in the fact that the Fed is likely to accelerate its rate hikes and reduce its balance sheet," said Yukio Ishizuki, a senior foreign exchange strategist at Daiwa Securities Co.

Still, the governor and Finance Minister Shunichi Suzuki have warned that the rapid pace of the yen's fall is undesirable. Kuroda has said the yen's sharp fluctuations can cause trouble for companies making business plans.

"It's desirable that currency moves are stable, reflecting both economic and financial fundamentals," Kuroda said in a press conference after Thursday's meeting. "We will be watching the impact of currency moves on the economy and prices very carefully."

Their warnings have had little impact as market participants reckon there is a slim chance that the Finance Ministry will actually intervene in the currency market.

"It's become clear that verbal interventions don't make any difference, as investors see it as 'all words, no action,'" Kanda at Gaitame.com Research Institute said.

Japan posted the largest trade deficit in seven years in the fiscal year ended March 2022, as a surge in energy prices boosted imports with eight consecutive months of a deficit from August.

As long as demand for the dollar from importers remains strong trade-wise, attempts by the authorities to arrest the yen's tumble will prove short-lived, analysts say.

"Balance in currency demand has skewered as importers have constantly been buying the dollar, with that need unlikely to end as long as soaring commodity and energy prices don't fall," said Ishizuki.

The BOJ could ask other central banks to step into the market in concerted efforts. Other countries, however, look little interested in the yen's recent rapid depreciation as they are focusing on curbing inflation and mitigating the impact of the Ukraine crisis, analysts say.

With the House of Councillors election scheduled for the summer in Japan, voters are likely to focus on some of the factors that have recently pressured consumer spending, including elevated commodity prices and the yen's rapid depreciation, and how the government plans to mitigate those risks.

"It's not about when the yen might begin to strengthen again," Kanda said. "It's about how far it will fall."

Yen falls to 20-year low in 130 zone vs. dollar after BOJ meeting