FOCUS: Pregnant trainee in Japan feared being forced to return to Vietnam

A Vietnamese woman who came to Japan as a technical trainee and feared being forced to return home when she became pregnant, was arrested for allegedly abandoning the bodies of stillborn twins she gave birth to while alone at home.

Le Thi Thuy Linh was sentenced in January to three months in prison, suspended for two years. She has appealed to the Supreme Court, claiming the verdict would have been different had the judge known the plight of foreign trainees. 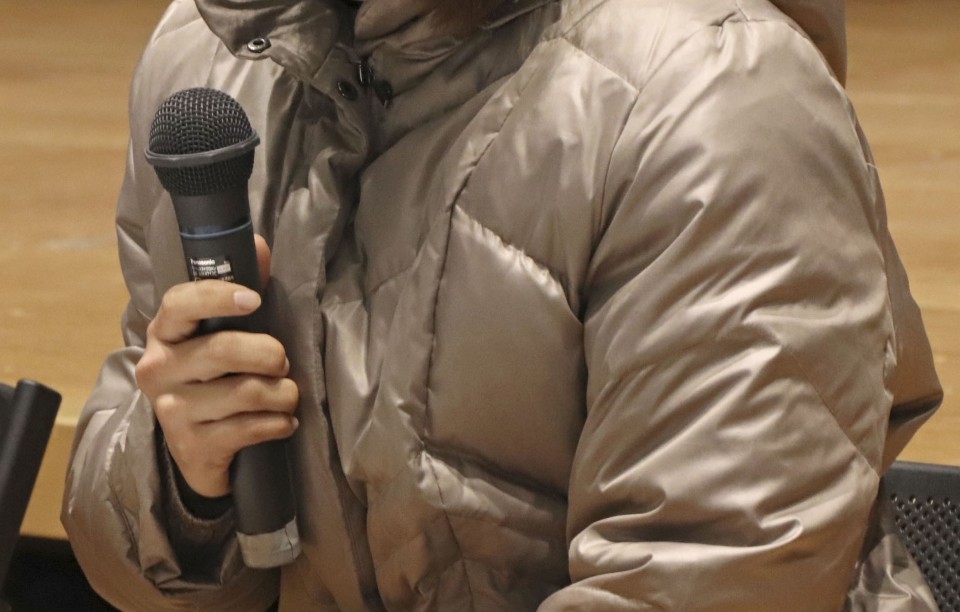 Le Thi Thuy Linh speaks at a press conference after a high court ruling on Jan. 19, 2022, on condition that her face not be exposed. (Kyodo)

The 23-year-old may have been found guilty because she is a technical trainee, her defense counsel asserts, while the point of legal dispute was whether she had left the bodies without burial -- an illegal act regarded as corpse abandonment -- or was preparing to bury them.

Her isolation during childbirth highlights the predicament of many foreign interns working at companies and farms in Japan under the government-sponsored technical training program, her defense counsel said. Such workers are mostly supervised by Japanese intermediary organizations.

"If the judge who wrote this decision had understood how much I and other technical trainees suffer and how we are afraid of our employers and supervising entities, the result would be different," Linh said in a written message to a press conference that her defense team held in Kumamoto, southwestern Japan, in February.

The team said its campaign seeking her acquittal has garnered more than 80,000 signatures of support. 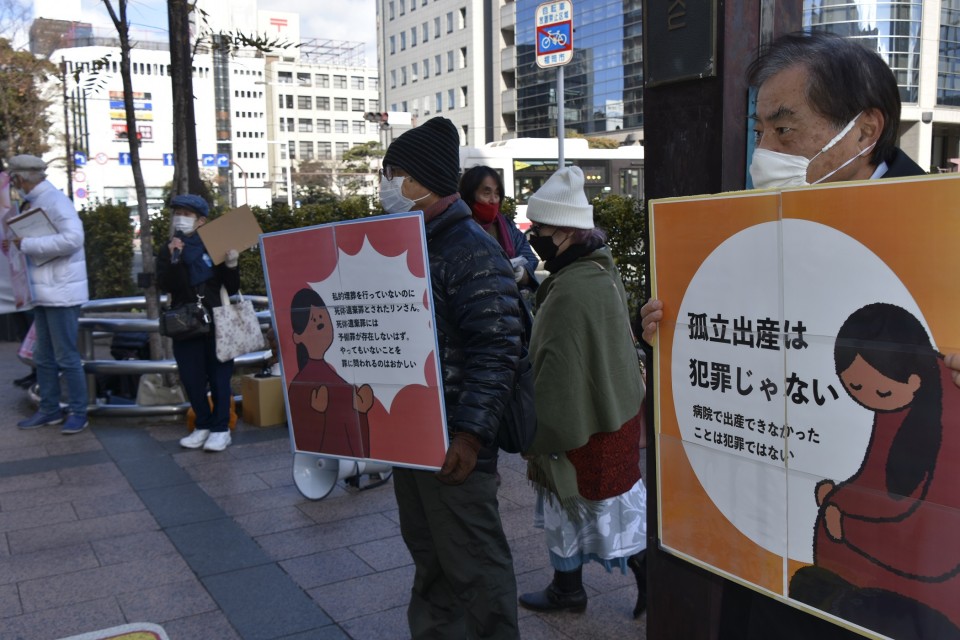 Supporters of Le Thi Thuy Linh campaign for signatures in support of her acquittal in Fukuoka, southwestern Japan, in January 2022. (Kyodo)

Linh began working from 2018 at an orange farm in Kumamoto Prefecture and became pregnant in the summer of 2020.

While Japanese law prohibits detrimental treatment of pregnant workers, Linh had heard nothing about it from the farm nor the intermediary that introduced her to the workplace.

She was also aware that a number of trainees had been forced to return home due to pregnancy.

As her family relied on her remittances, she could not return home. An abortion drug she bought online did not work. On Nov. 15, 2020, she gave birth to twin boys who did not breathe. 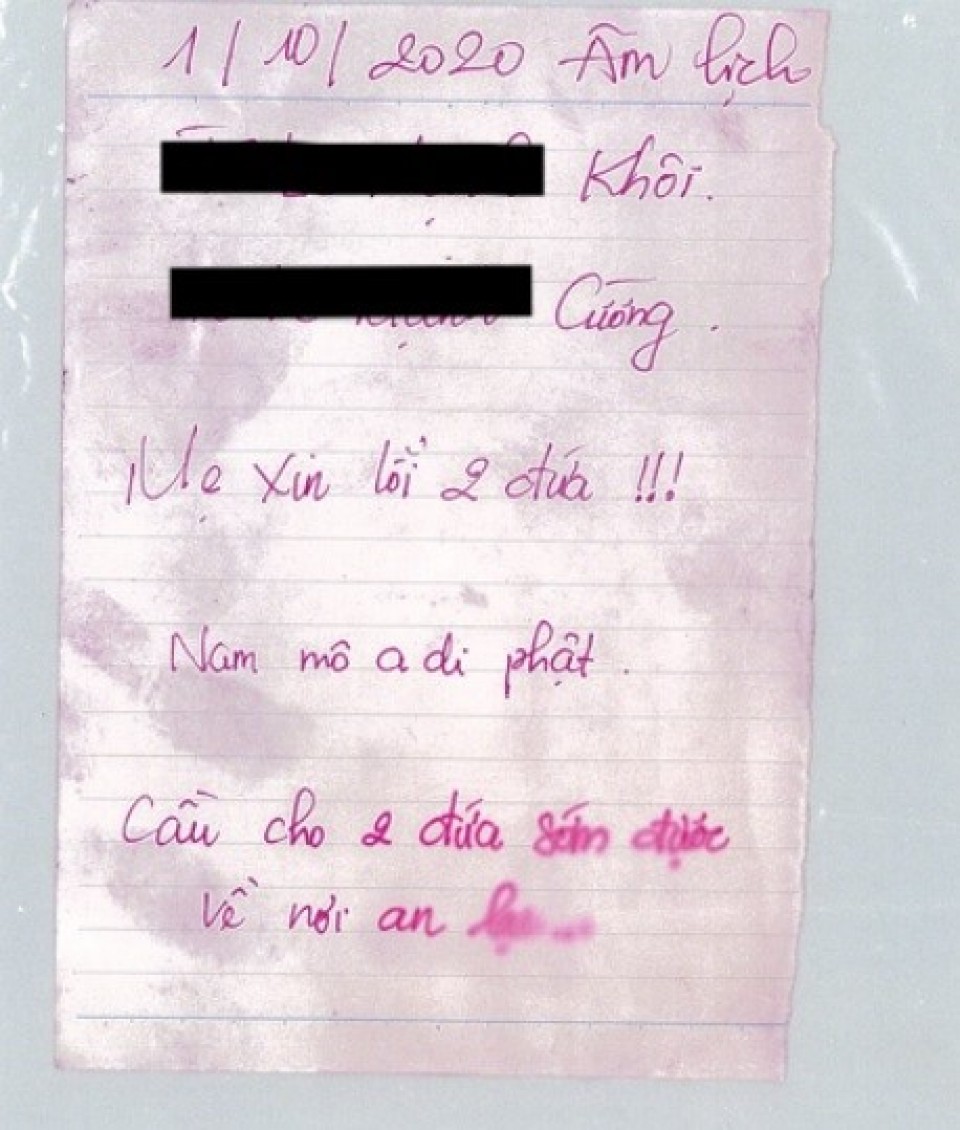 Photo shows a letter written by Le Thi Thuy Linh. (Photo courtesy of Kumustaka -- Association for Living Together with Migrants)(Kyodo)

Naming the boys "wise" and "vitality" in Vietnamese, Linh wrote a letter saying, "I'm sorry, my twin babies. Please sleep peacefully." She placed the letter along with their bodies, which she wrapped in towels, in a cardboard box that she sealed with tape.

Linh put the box in another that she also sealed and placed it on a shelf.

She was arrested on Nov. 19 after she mentioned the stillbirths at a hospital.

During her trial, Linh's defense team argued she kept the bodies at home with the intention of burying them and so did not abandon them.

The Fukuoka High Court dismissed the defense argument, ruling Linh had sought to hide the bodies because she placed them in sealed boxes after concealing her pregnancy in an effort to continue working in Japan.

Her actions hurt religious sentiments and feelings regarding mourning the dead, the court said.

After the ruling, lawyer Hiroki Ishiguro, who leads the defense team, said Linh sealed the boxes so the twins would not "feel cold," when she was close to her limits physically and mentally after giving birth and bleeding heavily.

"Is it appropriate to view it as disrespectful of the dead?" he asked.

With the case set to be considered by the top court, the defense team is concerned about whether a male-dominated bench would be able to understand the burdens of childbirth. Only two of the court's 15 justices are women, and five of the 15 try each case.

The defense team solicited opinions about their client's behavior, asking whether it was disrespectful of the dead, from mothers, obstetricians and religious activists as well as visitors to its website and submitted them to the court on April 11. 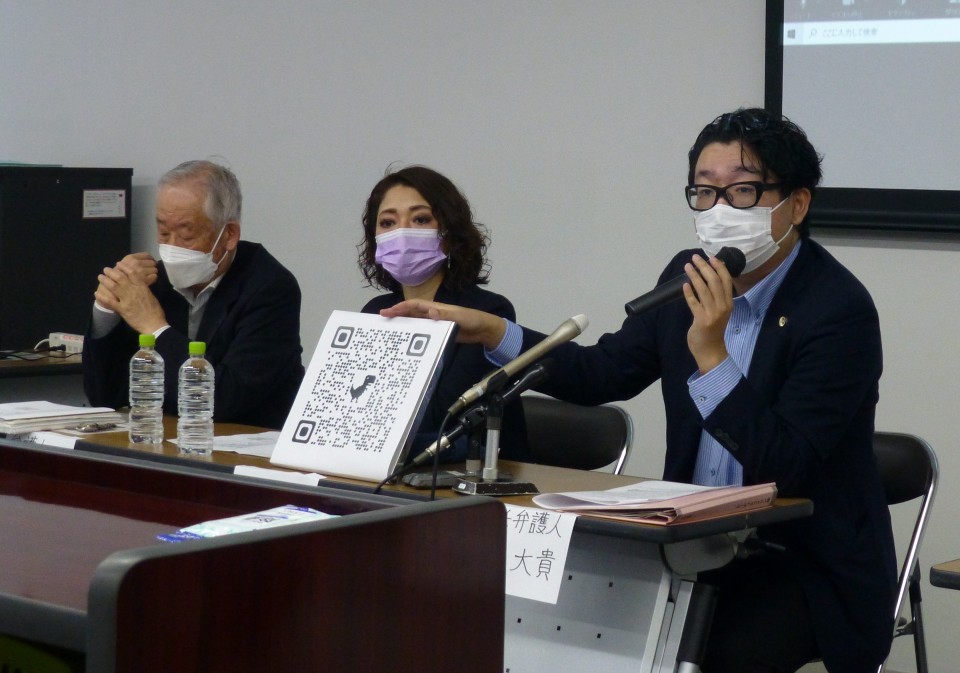 Lawyer Hiroki Ishiguro (R) speaks at a press conference in Kumamoto in February 2022 about soliciting opinions from the public regarding the case. (Kyodo)

According to nonprofit organization YWCA Kumamoto, which supports technical trainees, maternity-linked harassment is not uncommon.

One woman received an angry message from an intermediary organization and was deprived of her home after revealing she had become pregnant, according to the nonprofit that quoted her as saying, "I was treated like an object."

YWCA Kumamoto's Yukiko Kaikita said, "Being treated as a criminal after an isolated childbirth, is it only the woman's fault? It's also a matter of gender inequality in Japan. Linh-san was made to bear the burden of what Japanese society has left unresolved."

To prevent foreign trainees or students from becoming isolated during pregnancy, staffers at intermediary organizations, municipal governments, Japanese language schools and other entities need to offer support, said Sophia University professor Masako Tanaka during an online seminar in February for such staffers.

In a "survey of immigrants in Japan" conducted between June 2020 and September 2021, 18 percent of 290 female respondents reported being informed of restrictions before coming to Japan, such as having to return to their home countries if they became pregnant, while 19 percent of 161 women with partners had had unwanted pregnancies, she told the seminar. 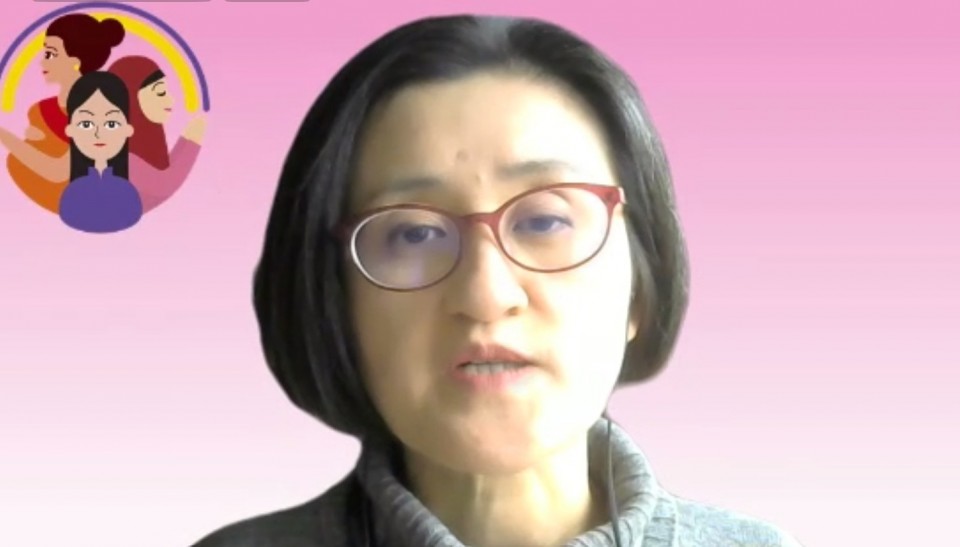 Tanaka said the entities should overcome language barriers through collaboration with other groups, while adding the problem stems not only from language but the difficulty of accessing safe contraception and abortion services in Japan.

Contraceptive pills and intrauterine devices are not easily available in Japan, while morning-after pills require a prescription and cost between 6,000 yen ($46.6) to 20,000 yen.

In addition, there are too few medical interpreters and drugs obtained on the internet can cause side effects.

Linh's case highlights "a serious problem regarding reproductive health and rights," Tanaka said, adding that addressing such issues would serve not only foreign residents but all women in Japan.

The technical training program for foreign workers is problematic in itself, said Shoichi Ibusuki, who co-heads a liaison group of lawyers dealing with problems faced by foreign trainees.

There were 354,104 foreign trainees in Japan as of the end of June 2021, of whom 42 percent were women, according to the Justice Ministry.

A total of 637 women stopped working under the program due to pregnancy or childbirth between November 2017 and December 2020, and only 11 of them had returned to work, a Health, Labor and Welfare Ministry survey showed. 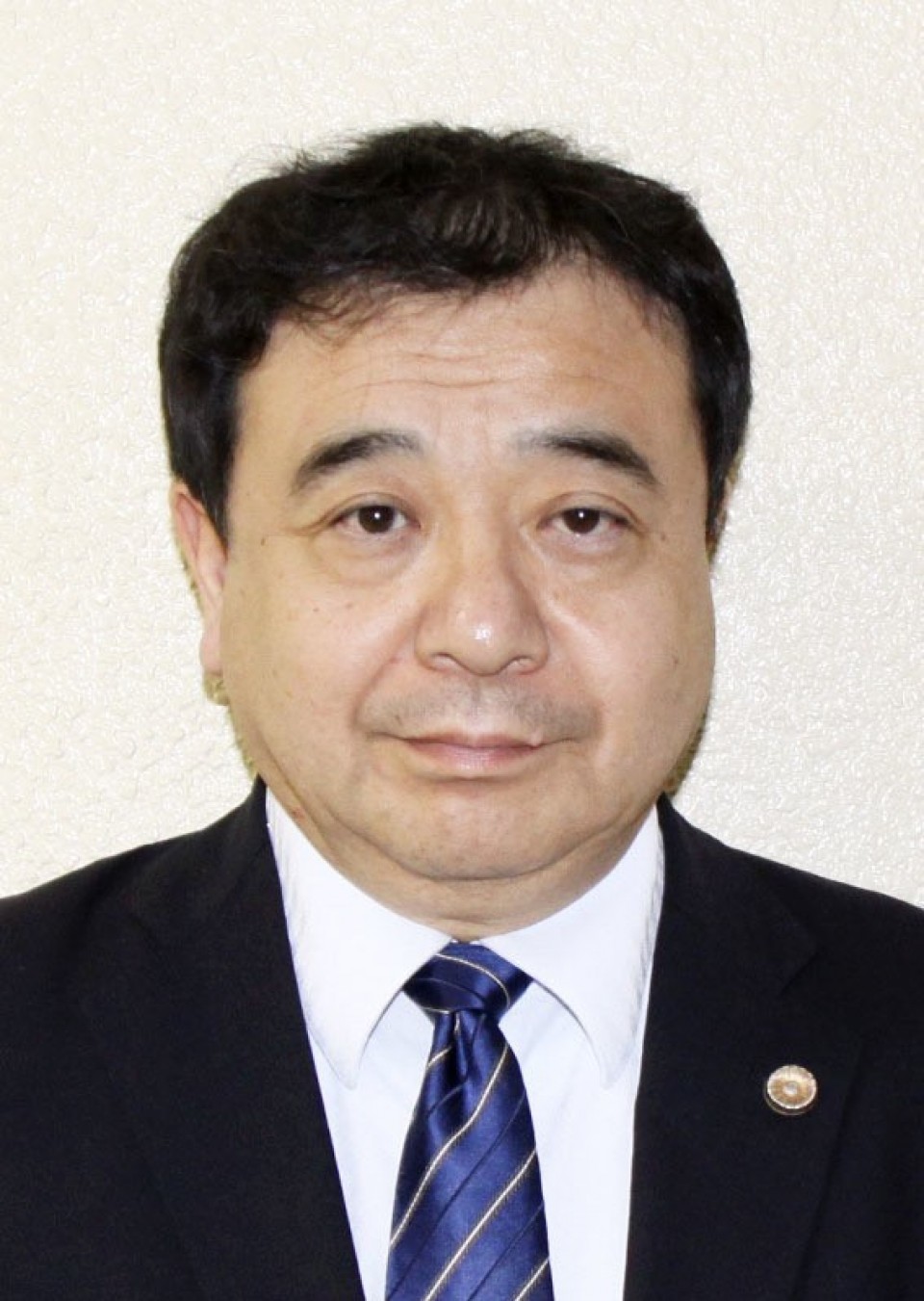 But the 637 women were only the tip of the iceberg as other reasons are often cited when reporting to the government, even if the trainees were forced to return home due to pregnancy, Ibusuki said.

"I am also consulted about such pregnancies and the number is abnormally high. No matter how many times the Justice Ministry says in a notice that they are free to conceive or deliver, they are repeatedly forced to return home," he said.

"Small and medium-sized firms as well as some large companies in Japan routinely fire women due to pregnancy. It's more crude for trainees who are in a weaker position. It's double discrimination for being a foreigner and a woman," he said.

Ibusuki said he knows of cases in which brokers sending trainees to Japan ban pregnancy, childbirth or even contact with Japanese to prevent romantic relationships.

Trainees tend to endure their conditions as they are often from poor countries or regions, incur debts to finance the high program enrollment fees levied by brokers in their home countries and are eager to send money home, he said.

"To help change the painful situation of trainees, I'd like the Supreme Court to declare me innocent," Linh said in her message to the press conference.

Ibusuki said the intern program is a "hotbed of slavish and human trade-like labor," calling for an alternative system for Japan to accept foreign workers.